At first glance, the painted portraits in Winooski artist Corrine Yonce's exhibit, "Voices of Home," look like open windows along the side of an apartment building. Mostly solitary figures stare out into the world through the frames that surround them.

Audio interviews supplement some of the images. As the recordings play and listeners learn about the people portrayed in Yonce's paintings, a transformation happens. The rows of windows begin to seem more like open doorways along an imaginary apartment complex hallway. The subjects beckon: "Step inside my home and hear my story."

"Voices of Home" is on display at the Chandler Center for the Arts in Randolph through March 19. Yonce, who works in education and outreach at Champlain Valley Office of Economic Opportunity, created a number of the pieces while serving as an AmeriCorps VISTA volunteer in the mid-2010s. After spending time as a resident organizer in affordable housing communities, such as Burlington's Decker Towers and others in Chittenden County, she began to interview residents about the concept of home.

"Oral history, in its unedited form, is really the purest way to capture a person's story." Corrine Yonce tweet this

"I'm trying to get a diverse range of ... what affordable housing looks like," Yonce said in a video chat.

Yonce's project partners were the Vermont Affordable Housing Coalition and the Vermont Folklife Center. The latter organization helped guide the storytelling process, stewards the show's physical artifacts and hosts its audio. Gallery visitors dial a number on their cellphones and punch in an extension listed next to a portrait to hear that person's interview.

On the surface, Yonce explained, the exhibit is meant to encourage support of affordable housing. But its deeper meaning is more complex. The project aims to desegregate communities that are often isolated, neglected and stigmatized.

Yonce began by spending lots of time with people living in affordable housing units. She organized meetings and helped residents write letters to property managers to address their needs.

At Decker Towers, she led art-making workshops. Though the building is located one block from the Soda Plant, a central outpost in the annual South End Art Hop, its residents felt disconnected from the event, Yonce said. That is, until their art, and art made by other Burlington Housing Authority residents, was displayed at the Bobbin Mill Community Center during Art Hop 2017.

"Voices of Home" emerged from the discussions of community inclusion that followed. Its interviews are lengthy, often exceeding 10 minutes. They are largely unedited, too, which aligns with the Vermont Folklife Center's collaborative ethnography approach to storytelling and documenting.

"It's the idea that people have a right to say how they're represented in the world," Vermont Folklife Center associate director and archivist Andy Kolovos said during a video call.

"Oral history, in its unedited form, is really the purest way to capture a person's story," Yonce said. "When we start editing, we're making decisions about what's important."

Yonce captures her subjects' likenesses as if they're bathed in a magic-hour glow. Some pose with pets on their laps; others are empty-handed. A bold color scheme of gold, buff, aqua and slate runs through the paintings, coalescing in a unified palette.

Yonce also captured intimate and illuminating stories. One portrait subject, Noreen, describes how she came to Decker Towers. She'd spent years living with her husband and children in a home in Milton. But after her husband, the family's primary earner, died in a car accident, she lost stability. Though she kept things together while her children were still living at home, eventually she had to sell her house just to get by. She didn't find anything permanent for years.

"I didn't think it would ever happen," Noreen says in the recording. "I'm like, 'What the hell did I do wrong?'" 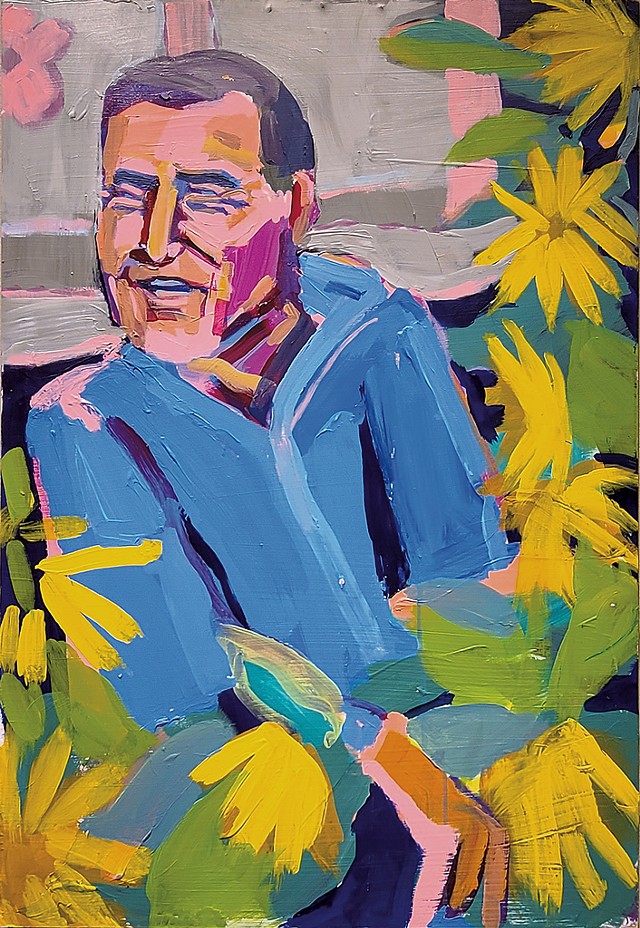 After considerable struggle, Noreen found a safe haven in Decker Towers. She describes her home in simple terms that have big implications: She has her own bed and a table to eat meals she cooks herself, small things that felt huge after not having them during her years of housing insecurity.

"I just love that I can have people come over and visit me, and I'm not sleeping on someone's couch," she says.

David Foss, another of Yonce's subjects from Decker Towers, described a similar history during a phone call with Seven Days. Though he was housed for many years, a series of setbacks led him into homelessness.

"I thought I had it all, and then it was just a domino effect," he said.

Foss has lived at Decker Towers for eight years and is very active in the building's community. He said he likes how "Voices of Home" breaks down social barriers.

"They put the pictures up ... You can hear their story ... and people say, 'OK, maybe we're not so different,'" Foss said. "So many people come from horrible situations. And I think we try to prevent those situations [so they] won't come up again."

"Voices of Home" also includes pieces that stem from Yonce's own experiences with housing insecurity. When she was a child, her single-parent family was itinerant for a period of time.

"It was a really traumatic experience," Yonce recalled, explaining how "extremely destabilizing" it is not to have a connection to a home space and the safety and privacy it provides.

Some of the pieces inspired by her own life are mashups of domestic ephemera. The tapestries and sculptures reference "the performance of holding on to objects and carrying them from place to place," she explained. One striking item, "Tangy Delight," has a dissociative quality. The quilt-like assemblage of a mattress pad, Sunny D label, bath mat, shopping bag and paint results in an almost absurd, disorienting mass of household objects.

Though "Voices of Home" tells uplifting success stories, Yonce said some of her interviewees continued to struggle even after finding homes in public housing.

"There's definitely grief around the way they're perceived in their communities," Yonce said of Decker Towers residents. "The irony of the 'Voices of Home' project is that a lot of nonprofit housing developers want the story — but they want the good story, the feel-good story."

The original print version of this article was headlined "Step Inside"

Speaking of Chandler Center For The Arts