I stood waiting for the bus on Monday at the corner of Hickok and Elm streets in Winooski like a kid on the first day of school: a backpack slung over my shoulder, a shiny red apple in one hand, full of nervous anticipation.

It was my first time riding a Green Mountain Transit bus, and I had picked quite the day for my maiden voyage. June 17 marked the rollout of GMT's NextGen Service Plan, the most significant route change since the state legislature created the regional transportation agency in 1973. The launch was paired with the introduction of two new apps for mobile ticketing and real-time bus tracking.

Or so GMT promised. The tracking app kept telling me to walk a block away to another stop, but I stayed put, hedging my bets on the hard-copy bus schedule that a coworker had given me the week before. "Hickok & Elm: 8:25 a.m.," it said.

So I waited, counting and recounting exact change before the big blue bus lurched around the corner, about four minutes behind schedule. I boarded, and the driver pushed off, making his way through the roundabout traffic before looping around in front of the Champlain Mill, where about 20 people waited.

"Does this go to the hospital?" one young man asked him.

"No," the driver responded.

"It's coming," the driver said.

A woman overheard and disembarked when she realized she was on the wrong bus. As we peeled away from the curb, I saw her, wide-eyed, conversing with a fellow passenger who looked just as nonplussed.

Such scenes were commonplace during that morning's commute. Despite years of planning for the route updates, GMT provided little advance warning to its riders. Much of the advertising was done online instead of accessible-to-all places such as on the buses themselves or at the transit center in downtown Burlington.

"Any big changes like this to all the routes, they definitely need to publicize about it more," said Escha Bullard, a frequent GMT rider. "It's not OK to do that without letting everyone know. People are going to go to the set time and set place and be like, 'Where's the bus?'"

Indeed, GMT made wholesale changes. The agency took what were 12 numerically labeled urban routes and condensed them into seven color-coded ones to make bus travel more consistent and require fewer transfers downtown. The end product looks more like a subway map than a collection of disjointed lines.

"Transit needs to find a way to constantly reinvent itself and be relevant to the needs of today," said Burlington Public Works Director Chapin Spencer, who has served on the GMT board for 18 years.

Buses on major routes — to Williston, Essex Junction, Shelburne Road and North Avenue — now run every 20 minutes from 6 a.m. to 6 p.m. Most other Burlington routes run on the half hour.

"That dependability," Spencer said, "is going to improve our riders' experience."

The goal is essentially an imperative for GMT, which saw ridership decline by 11.4 percent between 2015 and 2018; numbers this year are up. Nationwide, ridership decreased 6.9 percent over the same period, according to data from the American Public Transportation Association. 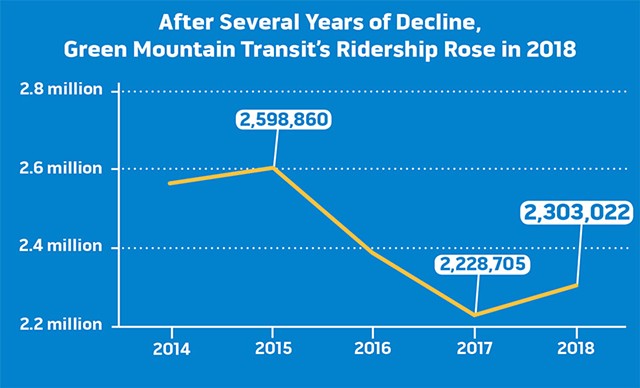 Public buses have always competed with private vehicles. But the advent of ride-sharing companies such as Uber and Lyft, plus scooters and e-bikes, has contributed to its decline, Spencer said. The bus needs to be convenient in order for people to use it.

Riders couldn't rely on GMT's previous app, RouteShout. GMT board chair Tom Chittenden said RouteShout struggled during bad weather and other delays — in other words, when customers needed it most. The $7.7 million transit center on St. Paul Street, which opened in 2016, features digital signs meant to display when a bus would arrive. But since the app didn't work, they became glorified clocks. GMT discontinued RouteShout two months ago.

On Monday, GMT introduced Transit, an industry-leading app used in more than 200 cities worldwide. I downloaded that and the ticketing app Token Transit and used them with varying degrees of success. Transit was using route numbers instead of colors and showed the Green Line to Winooski in blue on its map. The ticketing app worked, but not every driver knew what it was or how to tell whether I'd paid my way.

The clocks at the transit center still just showed the time; Transit doesn't integrate with the overhead digital signs, according to GMT marketing and public affairs manager Jamie Smith. But on my phone, Transit did report how many minutes away my bus was.

Other changes: The cost of single-ride passes increased by 25 cents, to $1.50 — though some buses' fare boxes still showed the fee at $1.25 — and monthly passes now cost $40 instead of $50. There are also more night and weekend trips, plus all-day service from downtown to the Burlington International Airport. That leg is now part of the former College Street shuttle, which ferries folks for free between the waterfront and the University of Vermont Medical Center. Riders who take it to the airport must pay a fare.

"Key high-traffic routes that serve a number of low-income, transit-dependent people are going to be running more frequently throughout the day," Spencer said. "As with any big plan ... there's going to be some pros and cons."

Regular bus rider Judith Pelton, 81, thinks NextGen is overdue but wishes GMT had been more proactive about advertising it. The Burlington woman didn't know about the changes until she spoke with me.

"Maybe the assumption is people use social media, and of course, I just don't," she said last Thursday.

The day before, four GMT customers at the transit center expressed the same concerns. James Otto, a City Market, Onion River Co-op employee who rides the bus several times a week, hadn't heard about the changes to the routes and fare, or the new apps.

"You'd think they would advertise it a little more heavily, given that people rely on it for work. [They should] definitely have stuff plastered in here, maybe in the bus stops, have some posters up," he said. "They probably should have done that weeks ago so people would know ahead of time."

The GMT board approved NextGen in April. Even Chittenden, the board chair, admitted the agency could have been more proactive. But with any big change, he said, "the major refrain is that it's not communicated well enough."

Smith said the agency advertised on its website, social media and Front Porch Forum, and with print ads in local newspapers. She said it also held a series of public meetings earlier this spring.

But it wasn't until last Friday — the final business day before NextGen launched — that drivers handed out paper route maps. There were no posters to be found on the buses or at the transit center, though the digital signage there did include one slide that directed people to ridegmt.com. Smith, GMT's general manager and its director of planning were all out of the office that day.

Come Monday, a lot of passengers were confused.

Kimber Clark, a Burlington resident who rides the bus nearly every day, heard about the changes in April but said that didn't make day one any easier. She picked up a comment card at GMT's information table. "I do not like the new bus service," she wrote. "Go back to the old way. It is easier."

Richard Moody, a homeless man who rides the bus to the Howard Center's Chittenden Clinic in South Burlington every morning, waited at the other end of the platform. He, too, was a little lost.

As Moody looked for the bus to the hospital, William Robertson hopped on the Red Line (formerly the No. 1 bus) headed to Williston. The Burlington resident rides GMT buses up to four times a week and said he'd already heard a lot of complaints from fellow passengers.

"I'm going to have to sit down and figure [it] out," he said of the schedule. "I don't know why they made the changes."

I told Robertson that GMT wanted to make bus travel simpler. As I listened to him disagree, an eavesdropping fellow passenger silently mouthed, "It's not."

"People have a hard time adjusting to change, too, if it's been like that for years and years," Palin said as she took a drag on a cigarette outside of the Williston Walmart during a break between rides. "It's going to take a little bit."

Smith, GMT's marketing manager, expected some hiccups on the first day but said most people she talked to on Monday understood why GMT made the changes. She thinks the authority's challenge now is recruiting new riders, people who have never taken the bus and can be convinced it's a viable commuting option.

"I hope you fall in love with it," Chittenden, the board chair, told me last week.

Love might be too strong a word — at least for my first go at Queen City public transit — but it was definitely a different experience from riding alone in my car, getting frustrated at the innumerable four-way stops on the way to the newsroom.

I'm not sure the bus can replace the convenience of my own vehicle, but I now see it as an option. If I can survive day one of GMT's biggest transit change in nearly 50 years, why not?

As long as the bus arrives on time, that is.