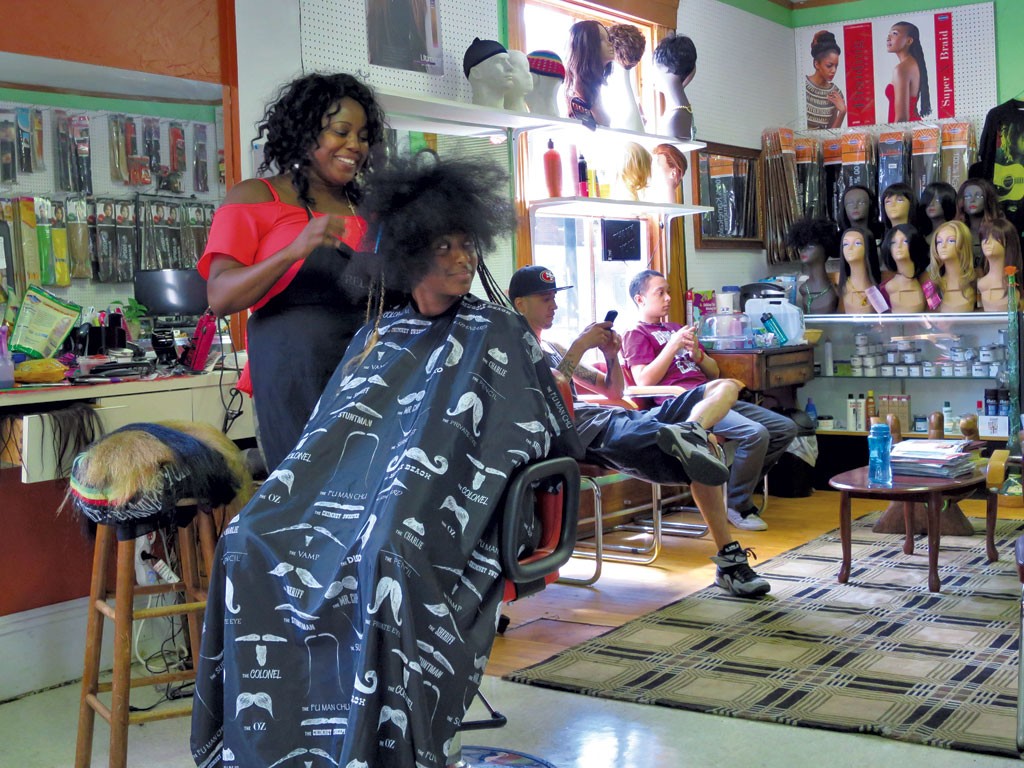 Every other month, 14-year-old Mistre Newton travels two hours from her home in Saranac Lake, N.Y., to the "big city" of Burlington. While her parents spend their day at the mall and the movies — typical teenage pastimes — Mistre sits in a stylist's chair for six hours getting her hair done at Diversity Hair Salon. 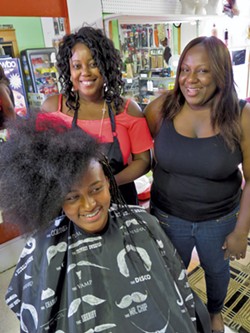 The African American high schooler usually downloads a couple of movies onto her iPhone, but for her latest visit to the Pearl Street shop, she forgot. She had nothing to distract her while stylist Jacqueline Gibson tugged at her hair for hours, adding 12-inch synthetic hair extensions, alternating between black and blond. Usually after she goes home, Mistre said, she takes Advil at night to stop her head from throbbing.

Mistre winced when Gibson tugged at the hair near her temple. "When she gets to the spot, I get nervous," the teenager said.

Skilled cosmetologists who specialize in working with black hair can be elusive in rural New England, one of the whitest parts of the U.S. Mistre started coming to Gibson after her last hairdressers — two college students in Saranac Lake — moved away. Her mother found Diversity via the internet. "Here's the closest to us," she said.

Mistre is not alone in traveling some distance to Diversity. Gibson said some of her clients come from White River Junction, Plattsburgh, N.Y., and Rutland. Many of them find her online — she uploads her creations to Facebook. The 42-year-old stylist can no longer take walk-ins; she's booked solid for sometimes four weeks out, and is busiest in spring and summer because of proms and weddings. She also advises her clients to schedule appointments early to avoid the back-to-school rush in August.

Gibson and her former husband bought the salon in 2008 and decided to keep the name because it reflected the kind of clientele they wanted — diverse. Gibson styles both men's and women's hair. Most, but not all, of her clients are African or African American. To provide hair treatments for Muslim women who wear the hijab, Gibson sets up a private corner where they won't encounter the male clients visiting barber Algenis Garcia, who rents space in the shop.

In Gibson's section of the salon, the walls are lined with neon green and yellow, brown, red, blond and black synthetic hair packed in plastic bundles, interspersed with ones that contain human hair. Mannequin heads with wigs sit atop a glass display, which is filled with hair products such as African Pride conditioner, Bonfi Natural Oil Free Wig Shine Spray and Jamaican Mango & Lime Locking Creme Wax. The Bob Marley T-shirts on sale hint at Gibson's Jamaican origins.

"This is a talent I have had since I was a kid," Gibson said, adding that she practiced on her friends when she was young. After immigrating to the U.S. in 2005, Gibson enrolled in a two-year cosmetology program at the Center for Technology, Essex in Essex Junction so she could get her license to work in Vermont. While in school, she was employed as a hospital housekeeper.

Gibson fixed her eyes on the television while her fingers gathered Mistre's hair and scurried down its length, leaving tight braids in their trail. She only stopped to look at Mistre's hair when combing out the knots and dividing it into sections. During the week, Gibson watches soap operas and talk shows. Over the weekend, she switches to MTV and Lifetime. People often ask her if her hands get tired from braiding and weaving hair. Actually, she noted, it's her back and feet that ache from standing for long stretches of time.

Gibson explained that the artificial hair protects Mistre's natural, curly hair from becoming brittle when exposed to the elements, allowing it to grow. The teenager said having her hair in braids means she can go about her daily life without spending too much time on hair management. All she has to do is put her braids up into a bun, and she's ready to go.

Braids — with or without extensions — are a popular choice in summer, said Gibson, because they keep the scalp cooler. During winter, many of Gibson's clients prefer weaves. She braids their natural hair into cornrows and weaves or sews hair extensions into the tracks to give the look and feel of longer, thicker hair, which protects the scalp from cold air and wind.

Gibson isn't the only person in town who knows how to braid and style black hair, but other professional hairstylists acknowledge her skill. Stephen Bevilacqua, owner of Indigo salon in Burlington, has started taking his teenage daughter, Sophia, to Gibson's shop to get her braids done.

"She's fast. It's an art," Bevilacqua said. What Gibson accomplishes in six hours would have taken him three days, he added.

Miriam Apaloo has been entrusting her hair to Gibson since before the stylist had her own shop. The 29-year-old Burlington resident met Gibson through a family member in 2005. Over the years, the two forged a friendship as Gibson did Apaloo's hair at one of their homes. Apaloo tries a different hairstyle every two months, spending upwards of $150 on each visit. She takes special care of her weave, wears a shower cap when she bathes and avoids swimming.

Apaloo is not shy about describing the kind of hairstyles she wants. But she said Gibson is also adamant about protecting her reputation. "She told me, 'I'm not having you walking out looking like crazy,'" Apaloo said.

Gibson said she enjoys making her customers' hair beautiful but gets frustrated when she has to "fix someone's mess." She's had clients arrive at her shop after another stylist botched the job. Sometimes there's not much Gibson can do to save damaged hair besides cutting it off. Gibson said her own clients sometimes return to her for extra help because they went to someone else when they couldn't get an appointment with her.

Garcia inspires similar loyalty among his clients. A former baseball player from the Dominican Republic, he's been a barber for about seven years and began renting space from Gibson two years ago. In his section hang posters of men of various ethnicities with different hairstyles. Like Gibson, he is mainly self-taught and practiced on his friends before becoming a licensed cosmetologist.

Geraldo Mercado of Rutland has been coming to Garcia for a haircut at least once a month for the past two years. He said Garcia "cares about lines and edges," treats haircuts as "an art form," and does not treat his customers "like an assembly line."

Nausori Osasa, another longtime customer, makes the 30-minute drive every three weeks from St. Albans. "I can't find a place this good," he said after getting a bald fade with line up.

Garcia and Gibson run their businesses independently, though they share physical quarters. And both hope to expand. Garcia wants to have his own barbershop within a couple of years, he said, while Gibson is trying to fulfill the promise she made to herself during cosmetology school. By her 45th birthday, she'd like to have a salon with two barbers, three stylists and a nail technician.

By the time her parents came to pick her up, Mistre was getting restless — she hadn't left her chair for hours. But she'd been looking forward to one last step: when Gibson would dip the ends of the teenager's braids in hot water to melt the synthetic hair and put a curl in the ends of the braids. Gibson predicted that Mistre would soon opt for more complicated hairstyles or a weave, like many of her older customers.

"She hasn't stepped out of the box," Gibson said.

When Mistre finally left the chair, she looked relieved. Despite the long drive and the pain, she said she doesn't dread getting her hair done.

"It makes me feel happy," she said.

Offered Gibson, "Your hair is your beauty."