Conversation With a Pac-Man Competitor 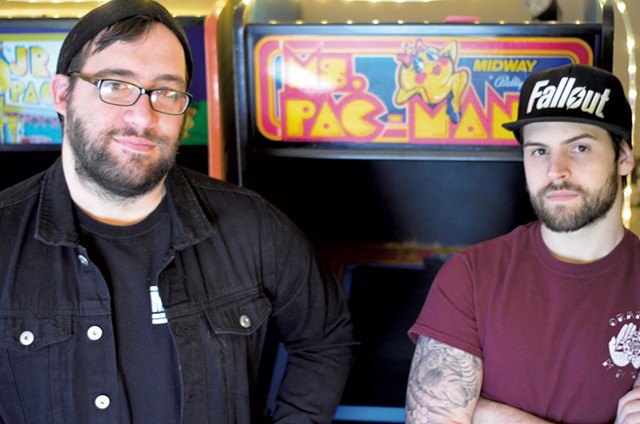 Vermont is home to a plethora of hard-core athletes. Take survival-race enthusiasts, who push their minds and bodies to the extremes of human endurance to be able to say, "I survived."

Neither Nick Grandchamp nor Evan Kurant is that kind of competitor. They're just two guys from Rutland who enjoy video arcades and decided to use their love of gaming for the greater good.

Beginning on Friday night, March 23, Grandchamp, 30, and Kurant, 29, who previously played music together in the now-defunct hardcore band Get a Grip, will headline "Arcade for a Change." The two will attempt a 24-hour marathon session of head-to-head Pac-Man, the classic 1980 stand-up video arcade game. Spectators can watch in person or stream the marathon live on Facebook or Twitch. The event, which will include music by Phil Henry and Poultney band Discavus, is presented by Dark Shadows Entertainment for the Rutland Regional Chamber of Commerce.

For every hour Grandchamp and Kurant play, local businesses and individuals can pledge donations to one or all of three Rutland charities: NewStory Center, an antiviolence support and prevention organization; Mentor Connector, which links vulnerable teens to supportive adults; and the Foley Cancer Center at Rutland Regional Medical Center. A vintage Pac-Man machine will be on hand for spectators to play, with its proceeds going to charity, as well.

As Grandchamp put it, "I just wanted to take one of my hobbies and make it beneficial to the community."

Though 24 hours on a video joystick isn't as grueling as the Spartan Death Race, it still requires preparation and forethought. We spoke to Grandchamp about the duo's training schedule and strategies for reaching the finish line.

SEVEN DAYS: Will you and Evan play by tournament rules or your own?

NICK GRANDCHAMP: We thought really hard about it. Since this is one of the first times something like this has been done in our area — in other cities, [gaming events] are more popular — we wanted to go with a very stripped-down version. When the idea first came up, we were like, "Should we do [pledges] by a high-score thing?" But I don't know how many people know what a high score is in Pac-Man. So our plan is, we're going to play pretty much nonstop, not including bathroom breaks, for 24 hours straight. We'll have a table set up nearby, so, if we need to eat in between turns, we can grab a quick slice of pizza. 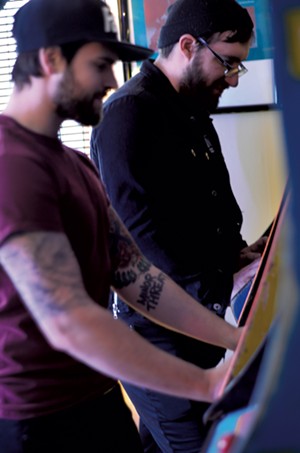 SD: Since you work full time, how'd you squeeze in the rigorous demands of training for a Pac-Man endurance event?

NG: About a year and a half ago, I started a home arcade at my house, and I've been heavily into learning about and researching the games. I now have eight, including both Pac-Man and Ms. Pac-Man. I also have an original ... four-player [Teenage Mutant] Ninja Turtles from 1990 [in its] original cabinet. I also have Asteroids, Neo Geo, Tetris, Jr. Pac-Man ... and a beat-'em-up called DJ Boy.

SD: Are your gaming skills self-taught, or did you attend one of those elite East Coast video-game academies?

NG: No, I'm totally self-taught. It's a strange relationship I have with a lot of the video games. I definitely played a lot growing up ... [I got into] the cabinet arcade thing because I love the nostalgia blast, but also because [the games] are extremely simple. There are some hard games, but anyone can walk into an arcade and figure out the gist of it. I like that a lot. Some of the newer games on Xbox are really in-depth, and that's cool. But I'm like, "OK, here's a joystick and two buttons. This button does this and that button does that."

SD: Did you have to build your endurance to play Pac-Man for that long?

NG: No, we're just totally going for it. To be completely honest, Evan is a much better gamer than I am. He's got the knack for it.

SD: What's your diet plan? You must burn a lot of calories gobbling digital dots and chasing ghosts through virtual mazes.

NG: Yeah, we've been thinking a lot about that one. We're really going to try to stay away from the energy drinks. No. 1, they're not healthy generally. And we especially don't want to be crashing halfway through after drinking Red Bulls. So we are going to try to stick to water and tea and maybe some [yerba] mate, but not too heavy on that. We're also going to try to eat lighter foods. Might pick up a couple of wraps from the food co-op — nothing too heavy — and some chocolate.

SD: You're not recovering from any Pac-Man-related injuries, are you?

NG: [Laughs] No. Evan came over yesterday and we did about an hour run-through just to get the gist of how long each of us can last on our turns and see what else we can do during the two- to three-minute breaks to stay focused on the task ahead.

SD: Does Vermont have a competitive Pac-Man circuit?

NG: I don't know of this happening too much, especially in Vermont. I know there's a lot of World of Warcraft people who play super-long online, but that's kind of different. You can do a lot in those games. This [game] is really stripped down.

SD: Among serious Pac-Man players, how big a problem is doping?

NG: [Laughs] Um, Evan and I are both straight-edge ... so I don't plan to do too much sugar. I was reading up on these people who do these 24-hour runs. Not only can you do some harm to yourself, but then you hit hour 14 or 15, and your body starts to reject what you're doing. I don't want to crash.

The original print version of this article was headlined "Pac Mentality: Two Rutland Men to Play Pac-Man for 24 Hours Straight"