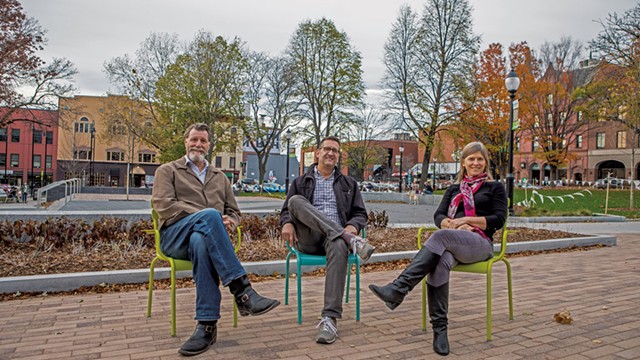 When landscape architect Jeff Hodgson lived in downtown Burlington, he used to walk through City Hall Park after the bars had closed for the night and see the central fountain — a granite horse trough dating back to 1905 — being put to several unintended uses. He knew that the water was only filtered, not chlorinated.

"The next morning at the farmers market, there would be kids playing in it. Those kids must have some good immune systems now," Hodgson recalled wryly while giving Seven Days a tour of the newly renovated park.

A partner at Wagner Hodgson Landscape Architecture, Hodgson led the park's nearly 10-year redesign with colleagues Amy Houghton and H. Keith Wagner. The park reopened to the public on October 16.

Standing beside the water feature that replaced the fountain, with jets and colored lights whose sequences can be set remotely, Hodgson noted that its recirculating water is not just highly filtered and chlorinated but UV-sanitized. It is also the state's first fully accessible outdoor fountain.

The new park is a highly engineered set of solutions — above-ground and below — to problems like the one the fountain once posed.

While the old park was a shady haven on a hot day, it had little else to encourage lingering. The narrow paths, heavy foot traffic and almost complete shade ensured that much of it was dirt by late summer, even as the city spent thousands on turf restoration every year. That dirt formed swaths of mud on downhill sidewalks after every storm. Many of the park's trees were dying of girdled roots, choked by the compacted soils. And they were all around the mature age of 30 to 40 years, making them vulnerable to ice storms.

The new park is a highly engineered set of solutions. tweet this

The fountain sat in a large, empty and crumbling concrete basin surrounded by non-ADA-compatible radial paths that forced pedestrians to go around it. Hodgson, whose company is one of only two in Vermont to have won national design awards from the American Society of Landscape Architects, sums up the old park as "a bit stark."

Visitors to the new park will find less shade, a more open space with better sight lines and twice as much seating, as well as several performance spaces. The redesign brings a modern touch to the heart of downtown Burlington while retaining what the state's preservation experts determined to be the park's historic characteristics: a central water feature and gathering place, radial paths, and a vertical element.

Wide paths of various materials and colors — permeable brick pavers, tan concrete, granite cobbles and more — intersect at a central ellipse formed by a low granite sitting wall. One slice of that ellipse contains the splash fountain jets, which were offset from center so that the downhill path could be lengthened and its grade reduced.

New, young trees set in grates in the hardscape contrast with the large-canopied trees retained along the western, southern and northern sides of the park. One hopes the lush new lawn will better survive foot traffic.

A bathroom and trilevel drinking fountain — the lowest spout at dog level — are located in suitably exposed parts of the hardscape. Benches made from thermally modified ash line the paths. While these are bolted in, the colorful metal folding chairs and tables can be moved anywhere in the park — which will come in handy when the summer sun bakes the sizable hardscaped area.

Large rain gardens, in the form of two basins and a stepped linear garden along Main Street, have solved the stormwater runoff problem. They are planted with shrubs and perennials, some still flowering in November.

Another low sitting wall shores up the linear garden. Breaks in the wall reveal precast concrete stepping stones leading to the lawn — the kind of feature that might show up in an architecture magazine.

The southeast corner holds a paved rectangular performance space outfitted underground with electricity, data and tent tie-downs; from it, performers can face a small audience on the steps of Burlington City Hall or a larger one on the lawn. It's one of four such event spaces, the other three being the fountain space, also fully wired; the Firehouse Plaza in front of the BCA Center; and the wired College Street Terrace adjacent to the Whiskey Room.

Still to come is the park's new "vertical element." One slice of the ellipse has been outfitted with a reinforced base that will hold a sculpture. Burlington City Arts executive director Doreen Kraft said it's likely to be a tribute to Paul Bruhn, late founder of the Preservation Trust of Vermont.

Art and functionality combine in the granite-cobble runnel that slows stormwater on its way to the corner rain garden. Also an artwork by Kat Clear and Tessa O'Brien called "Watersheds to the Lake," it features 120 Champlain marble discs bearing names of the tributaries to Lake Champlain. Each has a thread of gold paint — a reference to the Japanese art of kintsugi, or the mending of broken pottery with precious metals.

Mending is an apt metaphor, not just for the park's stormwater remediation efforts but for its very completion. City Hall Park's transformation began benignly in 2011, when BCA won a new National Endowment for the Arts grant to engage the community in reimagining it. But when the park became part of the city's Great Streets Initiative in 2016, and actual budgets emerged, many community members objected to what they saw as drastic revisions of a beloved space.

Critics formed the group Keep the Park Green in an effort to preserve healthy trees, some of which were slated for removal. The group also advocated for limiting costly renovations to soil remediation and retaining what they saw as the park's historical character. Tension at public-input meetings ran high, a lawsuit was filed, and misinformation and smears on social media targeted Wagner Hodgson and city arborist V.J. Comai.

"There's just a deep passion in Burlington about the public realm," Hodgson noted.

Donna Walters, a spokesperson for Keep the Park Green, put it more plainly during a phone call: "It was a pretty divisive project."

Despite those divisions, her group ended up having a significant impact on the park's tree cover. Its efforts spared the park's oldest tree, a 40-year-old silver maple now prominently solo in the largest expanse of grass. The St. Paul Street stormwater garden was relocated to accommodate another large silver maple, according to Comai. Walters estimated that a dozen trees were saved from the ax, including several crab apple trees near city hall.

Neither side is entirely pleased with the results.

"They made it into a plaza; we wanted a park," Walters said, adding, "Because of the nature of the water feature, there will be a lot of kids running through screaming."

Looking up at the trees, Hodgson opined, "In 20 years, there will be too much shade again" for growing grass.

Comai, a University of Vermont graduate in community forestry and horticulture with nearly 30 years' experience, thinks in even longer terms: "If you're looking 50 years down the road, [the trees] will be crowding each other out."

Other concerns have cropped up since the park was built. The Main Street sitting wall, a skateboarder's dream, already bears the streaks and pocks of multiple attempts. The benches and stone surfaces have an anti-graffiti coating that can be power-sprayed off if tagged, but the expensive product will then need to be reapplied. The rain gardens appear to need lots of maintenance, given the number of plantings and their tendency to trap garbage.

Hodgson said the city will soon install metal skate stops on the walls to discourage skateboarding. As for the rain gardens, Comai said they'll be maintained by him and his small crew, who "care about them." Densely planted to discourage weeds, they're "very manageable," he said.

As Hodgson pointed out, "The lowest-maintenance park would be [nothing but] lawn and trees. But the city benefits from a diversity of plantings — especially pollinator plants." In 2019, BTV joined Bee City USA, an initiative of the nonprofit Xerces Society for Invertebrate Conservation that engages communities in protecting threatened bee ecology.

If the city's ultimate goal in redesigning the park was to encourage more people to use it more often, that certainly seemed to be happening on opening day, a rainy Friday under 50 degrees. Among the many visitors I passed were two deliriously happy children soaked head to toe, their parents in pursuit while stripping off and holding out their own coats.

It was a far cry from the run-down park that can be glimpsed in a half-hour interview with Comai filmed by James Gero for Channel 17/Town Meeting TV on September 9, 2018. About 20 minutes in, Gero captures a public disturbance: Three police officers point guns at a shouting, shirtless white man backed up against city hall.

On Saturday night of opening weekend at the new park, Zach Williamson, BCA's festival and event director, looked down at the transformed space from the third floor of the BCA Center and saw a whole different sort of activity.

"It was 9:30 or 10, and I was getting ready to turn the fountain off for the night," he recalled. "I saw people out there playing in the fountain — adults and teenagers, or maybe college-aged — so I decided not to. I had a good time changing the colors and presets for the fountain jets and seeing how they reacted. It was fun."