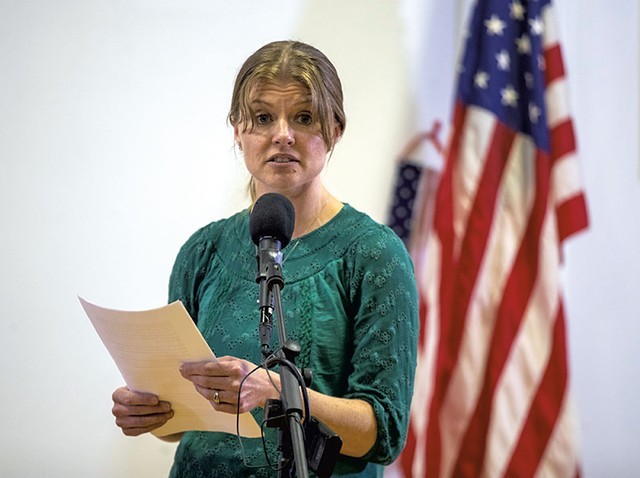 Liz Cady, a controversial member of the Essex Westford School Board, resigned on Tuesday night, sending a pointed email to fellow board members who she accused of hypocrisy and intolerance.


"When I was elected to the board, I had one goal in mind: to make the board more accessible and approachable to those who have concerns and criticisms. After over a year, I can honestly say that goal has not been achieved. If anything, it is worse," Cady wrote. "Board leadership has spent a wasteful amount of time admonishing me for doing exactly what this board does not: engage in two-way dialogue with the public."


Cady narrowly defeated incumbent Liz Subin last April to win an Essex town seat on the board. But Cady's one-year tenure has been marked by controversy.

She spoke at several anti-critical race theory gatherings last spring and summer. At the Essex Center Grange Hall in May 2021, Cady alleged that a school district training for teachers called Courageous Conversations was an example of critical race theory — an academic concept that states that racism is embedded in institutions such as schools. The term has become a polarizing one in the nation's culture wars.

Local Commotion: National Divisions on Race and Equity Are Roiling Vermont School Boards
By Alison Novak
Education
At the meeting, Cady also criticized the district's proposed equity policy, stating that by calling for the use of affinity groups — gatherings in which people who share common identities can connect and support each other — it was promoting segregation. She was the sole board member to vote against the equity policy last June.

Cady again made headlines in December when she penned an essay published by the Vermont Daily Chronicle, a conservative website. In the essay, Cady likened the treatment of unvaccinated people to the persecution of Jews' during the Holocaust. Board chair Erin Knox and district superintendent Beth Cobb promptly disavowed Cady's views. In recent months, the school board has revisited its member code of conduct policy, in part because of Cady's actions, according to the Essex Reporter.


In an email to Seven Days on Wednesday, Cady said that her family is planning to move out of state, both to be closer to relatives and also because of "the very toxic environment for those who have differing views." Resigning prior to moving is "the respectful and moral thing to do," she wrote.

Cady, who has lived in six other states and two other countries, added that she has found that in Vermont, "the intensity of hatred directed towards those with differing conclusions eclipses any other state or country our family has lived in."

Board Candidates in Essex Westford School District Differ on Equity Issues
By Alison Novak
Education
In her resignation email to the school board, Cady said that board leadership had created "an atmosphere of intolerant, political tribalism where dissenting voices from the community are actively blocked and attacked instead of being afforded the mutual respect of a listening ear and critical thought given to their words."

Board leaders treat community members who support their actions differently than those who criticize them, Cady charged.

"[T]hose who send praise and applause will receive immediate responses while those with differing views are treated with responses that do nothing to answer their concerns and effectively silences them into knowing how futile it is to contact the board ... if they receive a response at all," Cady wrote.

Board chair Knox declined to comment on Cady's resignation email.