Art Review: “Expanding Horizons,” painting and photography of the American and Canadian landscape, 1860-1918. Montréal Museum of Fine Arts. Through September 27. 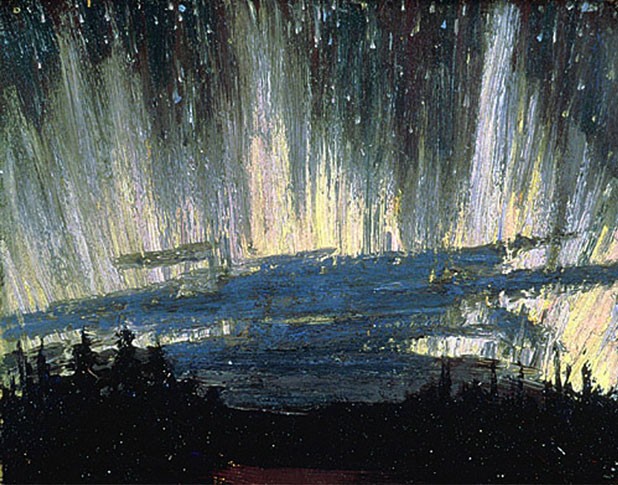 Few migrations in human history have been as extensive as the march of Europeans across the North American continent through the United States and eastern Canada. As these newcomers altered the environment, dominated other cultures and gradually redefined their own identities to become “Americans” and “Canadians,” they also carried the fine arts of Western civilization to the Pacific.

“Expanding Horizons,” an exhibit on view at the Montréal Museum of Fine Arts through September 27, presents painting and photography by many of the most notable artists working from the 1850s through the first two decades of the 20th century. While examples from the Hudson River School and Canada’s Group of Seven loom large in the show, other currents and subtexts are discernible.

The exhibition includes more than 200 pieces, which the museum organized as a coherent narrative — generous wall text documents the eras and styles according to geography. The works of key Canadians and Americans, presented side by side, don’t seem dissimilar. As the countries matured, so did their senses of self, and the artwork reflects that. It’s clear, though, that the American artists had more influence on Canadians than vice versa.

As New York City painters of the Hudson River School fanned out to swoon over the grandeur of Niagara Falls or Yosemite in the mid-19th century, some Canadian painters did the same. As described in a curatorial statement, “Some of the leading figures of Canadian painting during these years ... were strongly influenced by American contemporaries.” How could they not have been? The Hudson River School’s Albert Bierstadt (1830-1902) and his well-known colleagues were producing quite dramatic works. That pattern can be seen until about 40 years after Canadian confederation in 1867. In the early 20th century, Canadians consciously began laying the foundation for a national identity in the visual arts.

Québec artist Horatio Walker (1858-1938) was strongly indebted to the French Barbizon School; like many Canadians from the show’s later sections, he was inspired by European developments as well as those in New York. In Walker’s 1904 “The Ice Cutters,” rural workers live close to the land, and his vigorous painting style is direct and simplified. Walker, who traveled to Europe only in adulthood, developed a rugged style of figuration that was more realistic and natural than that of the Romantic era.

The evolution of figuration can be seen as a subtext of “Expanding Horizons.” Another may be the role of photography in the 19th century. Viewers may be most familiar with antique albumen print portraits on cabinet cards, but landscape was also a prominent subject. Seven photographs by Canadian William Notman. (1826-1891) appear in the show. The earliest is “St. Anne Falls Near Québec” from 1860; the latest dates from 1889. “The Glacier, Mt. Sir Donald and C.P.R. Hotel” documents a train arriving at a tourist hotel in the Rockies. In the foreground stand acres of clear-cut forest. “Progress,” in the form of environmental degradation, was often celebrated by early photographers.

An important survey of 20th-century Canadian painters appears in the exhibition. Tom Thomson ’s(1877-1917) “Northern Lights” demonstrates some of the mysticism of works by the Group of Seven, which is considered the first distinctly Canadian art movement. It was specifically rooted in responses to the natural world; no equivalent contemporary assembly of American painters was so firmly dedicated to landscape. In the U.S., most landscape painters were still aesthetically enrolled in the Hudson River School or else were third- and fourth-generation Impressionists. A few exceptions, such as Georgia O’Keeffe and Maurice Prendergast, do appear in the show.

As U.S. artists continue to learn more about their kinship with those north of the border, cultural influence may become a two-way street. Someday Canadian visual artists may appear on our national radar screen alongside Leonard Cohen, Neil Young and William Shatner.