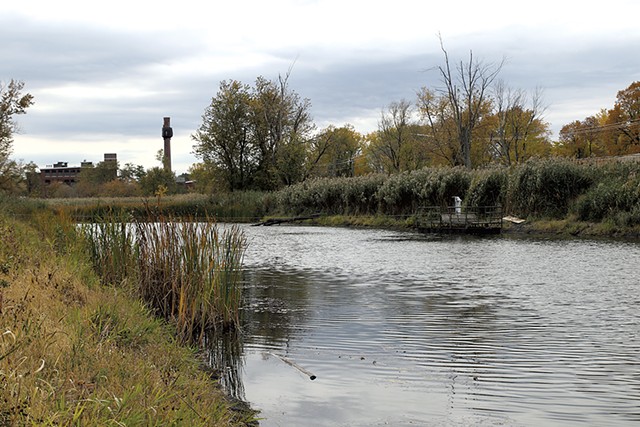 Karen Lumino was preparing for maternity leave from her job at the U.S. Environmental Protection Agency when she got a call: A developer wanted to build a Stop & Shop grocery store on an undeveloped strip along Pine Street in Burlington. It was April 1999, and the store wanted a September grand opening. That timeline would never happen, Lumino scoffed. Not on that property.

The area is contaminated with coal tar, a toxic black goo that's a by-product of the Queen City's industrial past, and any development there has to be very carefully vetted, Lumino knew. Regulating the site, after all, was her job.

Twenty years later, Lumino is still the site's remedial project manager at the EPA; her son is in college. The property, just east of what's known as the Barge Canal, remains forested and undeveloped, right in the middle of the South End's bustling arts and tech district.

It was also recently posted for sale. A cool $2 million will get you a slice of a Superfund site, plenty of strings attached. But the land's owner is confident that newly available loans and support from federal and state agencies will finally make development there a reality.

"Every dog has its day, so to speak," said Rick Davis, a 74-year-old Stowe resident who has owned the property for 35 years. "No time like the present."

There's plenty to like about 453 and 501 Pine Street, two adjacent lots with frontage along the popular corridor not far from downtown and Lake Champlain. Located across from the Dealer.com campus, the combined eight acres of land are wedged between the Maltex Building and the Burlington Electric Department headquarters on the west side of the street.

The land's appeal, though, is mostly surface deep.

For nearly 60 years in the early and mid-20th century, part of the property was home to Burlington Gas Works, a coal gasification plant that extracted fuel from coal to light the city's streetlamps. The unused Barge Canal — a relic of the city's past as a lumber port — became a convenient dumping ground for coal tar, fuel oil, cyanide and other contaminated residue from the plant, which closed in 1966. In the 1970s, the city discovered the pollution, halting plans to run the Champlain Parkway through the site; it is still unbuilt. 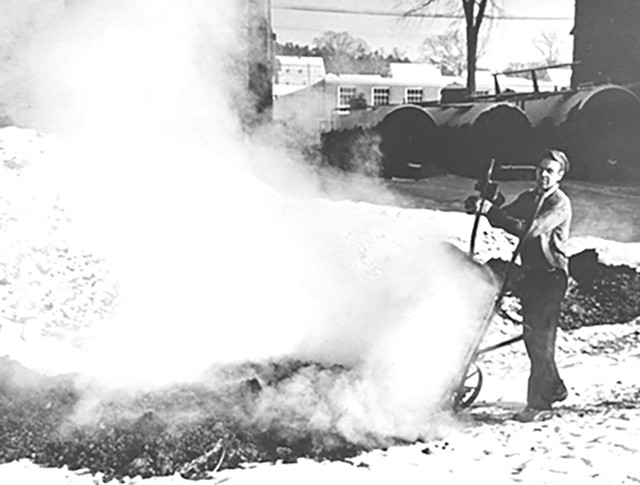 In 1983, the EPA designated a large swath around the Barge Canal a Superfund site, a federal program intended to clean up hazardous waste so the land can be reused. There are 14 Superfund sites in Vermont; this one just happens to be in its most populous city, next to its largest lake, along a stretch that has rapidly become desirable.

Davis' property at 501 is just a small section within the boundary of a larger 38-acre Superfund site and doesn't include the canal itself. The lot at 453 Pine is not inside the boundary but is a brownfield, a type of contaminated property regulated by the state. Since 2013, it has been part of a pilot program known as the Brownfields Economic Revitalization Alliance, which brings together state agencies, developers, municipalities and others who help fast-track redevelopment. These brownfield projects also receive EPA funding and guidance from the state.

Previous attempts to clean the properties and ready them for new life have proven unsuccessful, even with assistance from the brownfields program. In 1992, the EPA proposed dredging the contaminated mud from the Barge Canal and piling it 25 feet high on the site. Locals blasted the plan, which a Burlington Free Press editorial called a "13-acre above-ground hazardous waste dump as big as University Mall."

The EPA relented and instead constructed a protective sand cap in the canal to prevent the coal tar from spreading. The remedy has worked, for the most part. Coal tar began to permeate sections of the barrier in 2006, so regulators installed a new cap that absorbs the pollutants before they can reach Lake Champlain.

The canal itself is not for sale, but the EPA still worries that activity near it could cause the tar to seep to the surface. As a result, the Superfund site and a dozen adjacent parcels are governed by so-called institutional controls, which supersede city zoning in restricting uses. No housing or childcare centers are allowed, for instance, and crews can't dig deeper than five feet below the surface, except to install pilings that elevate structures to reduce the pressure they put on the contaminated soil. 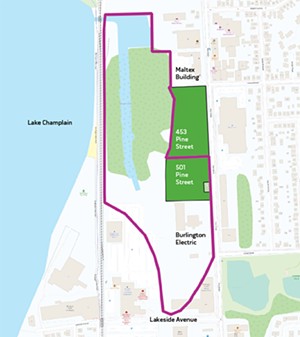 Developers have tried and failed to overcome these environmental hurdles. Since July 2000, the city has approved five different concepts for 453 Pine — most of which were office space with retail or restaurants, city documents show — but none of the projects made it past early review. Both parcels are in the city's enterprise-light manufacturing zoning district, which allows for things such as bakeries, bowling alleys, takeout restaurants and even community gardens.

"A friend of mine likes to say they built the Panama Canal with donkeys and buckets, so we should be able to figure this one out," said Lumino of the EPA. "It's not an insurmountable project; it just gets down to how much money it would be."

Larry Williams, a principal at development firm Redstone and Davis' brother-in-law, knows that all too well. Back in 2016, he proposed a five-story, 100,000-square-foot office building on the sites. The plans followed state and EPA guidance — the building would have been on stilts — but Williams backed out when he realized the site cleanup would add $5 million to the $25 million project.

"Whoever does it, you're going to need to pay a premium or find other sources of funding," said Williams, noting that Redstone sought low-interest loans and other financing, to no avail.

Trish Coppolino, Vermont's brownfield program administrator, said there are options now that didn't exist when Williams was in the thick of things. As of last year, whoever develops 453 Pine can apply for a low-interest $5 million loan through the Clean Water State Revolving Fund. It could help pay for the soil disposal and pilings that Williams found prohibitively expensive.

But Williams said a low-interest loan wouldn't have been enough. He needed a grant, which is only available to nonprofits. Coppolino recognizes that other incentives would help, but "this is the best we can do right now," she said.

Meanwhile, Gov. Phil Scott last year named much of Pine Street an "opportunity zone," one of two in Burlington and 25 in the state. Created as part of the 2017 federal tax cuts, the designation is intended to stimulate growth in low-income neighborhoods by offering sizable tax breaks to investors in opportunity zone projects.

Luke McGowan, director of Burlington's Community and Economic Development Office, said his department is in the midst of strategizing about how to market the city's opportunity zones to attract the right types of investors. He acknowledged that people criticize the zones for helping the rich get richer.

"We have no problem with developers making money on their investments as long as they also bring wealth to the community and meet our community needs that we've spent a long time outlining," McGowan said.

Nedde Real Estate is marketing the opportunity zone, too, and it has generated some interest, according to Davis' listing agent, Fernando Cresta. During a tour of the property last week, he played up the site's natural beauty. The lot is lush with towering trees and marshy grasses that open up to the canal; just by looking at it, you'd never know it was full of toxic sludge.

There's also a view of several encampments that have caused concern. In 2016, five people beat another camper to death near the Barge Canal. Last month, after finding numerous tents and used hypodermic needles on the grounds, the EPA wrote the city a letter asking for a police escort so that field workers could proceed with environmental testing. Davis also agreed to thin out some of the woods to reduce cover.

Cresta thinks the spruce-up will make the property more attractive to potential buyers. He's never sold a Superfund site before but thinks it's doable.

"You just promote it," Cresta said of his sales strategy. "We're hoping to get the right people interested. This is the only piece of land left."

Coppolino envisions a mixed-use project that could provide access to the canal's natural area and connect to walking trails and Lake Champlain. City residents similarly dreamed in Technicolor as part of an extensive South End plan published earlier this year. It called for the Barge Canal to be transformed from an industrial wasteland to a park with boardwalks and bike paths.

Davis, too, is optimistic that the tides are changing. Earlier this month, Gov. Scott signed an executive order that formalized the state's brownfields pilot program, calling for a committee to review brownfield projects annually and assigning each a team to look for grants and other financing. The goal is to have a "one-stop shop" to help developers transform the unused and stigmatized sites.

"There's some real desire to see this site get developed," Davis said. "My hope is that it will happen before I go to the happy hunting ground in the sky."