Conservative Senator Peg Flory to Hang Up Her Spurs 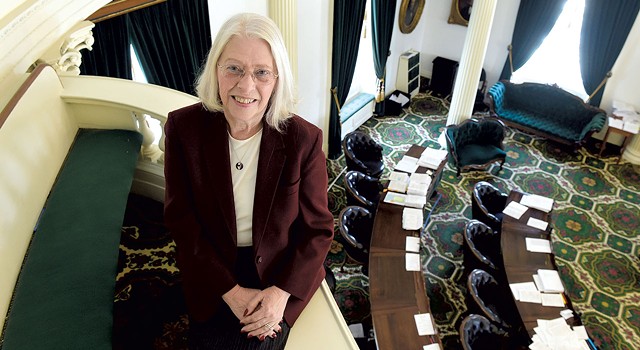 Vermont Sen. Peg Flory (R-Rutland) — a fixture in the Statehouse for nearly 20 years and one of the most outspoken members of the Republican opposition — is on her way out.

The 69-year-old lawmaker told Seven Days that she won't run for reelection in November because she wants to spend more time with her three sons and seven grandchildren, along with her new husband, whom she married earlier this month.

Known for her ruthless yet respectful interrogations of colleagues, Flory, a lawyer, reads every bill before it comes up for debate, marking pages with a plethora of pink sticky tabs. Speaking slowly in her deep, gravelly voice, she'll ask a series of benign-seeming questions before revealing some alleged flaw in the legislation.

Her questioning "demands from us that we do better work," said Senate Majority Leader Becca Balint (D-Windham).

When Flory departs, the Senate will lose a skilled and detail-oriented scrutinizer, and the Republican minority will be without one of its most effective debaters. Flory is frequently "the one who carries the torch" for her party, observed veteran lobbyist Andrew MacLean. "She's a tough hombre when she wants to be."

The Pittsford rep is always impeccably dressed, often in a blazer with a brooch, her nails painted deep red. When she's not in the Statehouse, she's usually outside, smoking a cigarette.

"She's not afraid of anybody; we were all afraid of her," joked her former seatmate, Green Mountain Care Board chair Kevin Mullin. Despite Flory's no-nonsense demeanor, colleagues describe her as fun-loving with a knack for cracking off-color jokes. Mullin put it like this: "If you wanna have an ice cream cone with someone, you grab Peg."

In crafting her arguments, Flory tends to rely more on logic than emotion, sharing personal anecdotes only when it strikes her as truly necessary, though she has no shortage of compelling stories to draw upon.

When she was 4 months old, Flory was adopted by a childless couple that raised her in Rutland. As an adult, she learned that her mother gave birth to her at age 15, having been raped by Flory's uncle. She later reconnected with her birth mother and her siblings.

"She's a tough hombre when she wants to be." Andrew MacLean tweet this

While attending Immaculate Heart of Mary elementary school, classmates would make fun of the fact that her adoptive father was the janitor.

"Kids used to call my dad 'Caveman,' and they'd refer to me as 'Caveman's Kid,'" Flory recalled. Encouraged by her father to treat the insult as a "badge of honor," she said, she'd catch her classmates off guard by playing along with the joke, telling them, for instance, that she'd eaten an elephant for dinner.

When Flory was 16, she suffered a stroke that left her with garbled speech and without peripheral vision in her right eye. Her vision never improved and, while she regained her ability to speak, some of the damage was permanent. Many people assume she speaks so deliberately because she's choosing her words carefully or creating pregnant pauses for effect. In fact, Flory said, "I have to speak slowly, or [the words] come out weird."

She earned an associate's degree in legal secretarial sciences at what is now Southern Vermont College, which is also where she met her first husband, Joseph. They had three sons and, for 12 years, Flory was a stay-at-home mom. She was also a den mother, overseeing a dozen Cub Scouts. She insisted they learn how to sew their own merit badges onto their uniforms rather than rely on their mothers.

Flory crocheted Christmas ornaments and sold them on the side, earning enough money to pay the family's property taxes.

After she returned to work as a legal secretary, her boss, Richard Pearson, encouraged her to become a lawyer. Flory took advantage of an unusual option in Vermont, which allows aspiring attorneys to complete a four-year apprenticeship instead of getting a law degree, provided they pass the bar exam. When she finally became a lawyer — without a bachelor's degree and at age 45 — Flory and Pearson became partners. She primarily worked on real estate and family court cases.

"She has a lot of gumption," said Tom Little, a lawyer and former state rep. "It ain't easy to become a lawyer by clerking the bar."

Flory's political career began with her election to the Pittsford Selectboard after she got involved in a debate about whether to locate an unlined landfill in the town.

Another infrastructure issue — the need for upgrades on Route 7 — inspired her successful run for state rep in 1998.

As a first-year lawmaker, she helped lead the opposition to same-sex civil unions.

"We were clearly major adversaries," said Rep. Bill Lippert (D-Hinesburg), who helped lead the fight for civil unions as the only openly gay lawmaker at the time.

"I never experienced direct animus from Peg, but I never felt like she could really appreciate the deep, deep hurtfulness of what it meant to our community and how what was happening was empowering those who did have a very deep animus toward our community," Lippert said. Even so, he continued, "We came to, I think, respect each other and appreciate each other."

The civil union law passed in 2000, but backlash propelled Republicans to take control of the House the following year. Flory was appointed chair of the Judiciary Committee in 2001, replacing Little, a Republican who had pushed for the legislation.

As chair, Flory led the effort to repeal civil unions. The bill narrowly passed in the House but died in the Senate, where Democrats retained a majority.

Flory, who also voted against same-sex marriage in 2009, said last week that she has "no problem with homosexuality."

Her position then and now, as she explained it, is that the benefits of marriage shouldn't be conferred on the basis of any sexual relationship. "Why should we give benefits based on who you slept with?" she asked, suggesting they should be available for members of all domestic partnerships — whether it's two brothers living together, a husband and wife, or a same-sex couple.

After Flory served 11 years in the House, then-governor Jim Douglas appointed her in December 2009 to an open Senate seat.

As chair of the Institutions Committee, Flory has for years played a key role in doling out dollars for capital projects.

She vocally opposed legislation allowing terminally ill patients to end their lives, which passed in 2013. She also recalled advocating for men's rights during legislative debates — or, as she characterized it, striving to make sure laws were "gender-neutral." This was influenced by her work as a lawyer, during which, she said, she "had to fight a whole lot harder" for her male clients seeking visitation or custody rights for their children.

In 2015, she defended a man during a particularly contentious Statehouse debate: Norm McAllister, a Republican senator from Franklin County who had been charged with sexual assault. Flory remained his fiercest advocate, even as lurid details of allegations made by three women surfaced.

When senators moved to eject McAllister from the body, she urged her colleagues to wait until after his trial, citing the presumption of innocence. She and McAllister were close friends, but she insisted that she "would have fought just as hard and taken the same position" had they not been.

Sen. Joe Benning (R-Caledonia) helped lead the successful effort to unseat McAllister, who was ultimately found guilty only of a prohibited act — arranging for a tenant of his to have sex with a man for money. Though the debate was highly charged, Benning said his relationship with Flory remained respectful throughout, which he credits to the fact that they're both lawyers.

Flory is one of seven Republicans in the 30-member Senate. As a member of the minority party for 16 of the nearly 20 years she's served in the Statehouse, she's accustomed to losing — but that hasn't stopped her from putting up a fight.

"I love that even when she knows the vote's gonna go down 23-7, that she feels a responsibility to represent her constituents and her base," Balint said. Noting that Flory reminds her of one of her aunts, Balint said she thinks of both women as "modern-day Annie Oakleys with brass knuckles."

Lobbyist David Mickenberg suggested that Flory is "effective even if her position doesn't prevail" because "she really pushes people to know their material."

"She has a unique ability to dive deep into the question, recognize a potential flaw and save us all from embarrassment down the road," agreed Benning.

Flory considers her efforts to ensure that legislation is clearly written and doesn't result in unintended consequences to be her greatest accomplishment.

"I know I drive people nuts," she said. But "even if I disagree with it, I want it to have only one meaning."

During the Senate's recent debate on background checks for firearm purchases, Flory flagged a potential problem: Could people be penalized if they removed guns from a suicidal friend or family member without first submitting to a background check? For her, the question was hardly hypothetical. On two separate occasions, she told colleagues, she personally took guns from friends contemplating suicide.

On another occasion, a younger man she knew, who'd had a traumatic brain injury, sexually assaulted her in her home, she told Seven Days. Shaken by the attack, Flory gave her guns to her sons, fearing that she might shoot a subsequent intruder.

The bill was tweaked to make clear that those who remove guns from dangerous situations wouldn't run afoul of the law. It passed, with Flory still voting against it.

During her legislative career, Flory endured a series of tragedies: her law partner, Pearson, committed suicide in 2006. In April 2009, her first husband died of a heart attack. And in December of that year, her best friend since seventh grade, Joan Wing, was killed in a car crash.

"Peg's had her share of adversity, but she always just keeps moving forward," said Mullin.

"She's such a strong personality that she perseveres," said Douglas.

Flory became uncharacteristically quiet when discussing the deaths. The lesson she's drawn from them is simple: "Life is short," she said. That's also her explanation for why she's leaving the Statehouse. Her new husband, Alvin Figiel, is Wing's widower, and the pair is already planning a trip to Italy for her retirement.