A Vermont couple brings music and yoga together 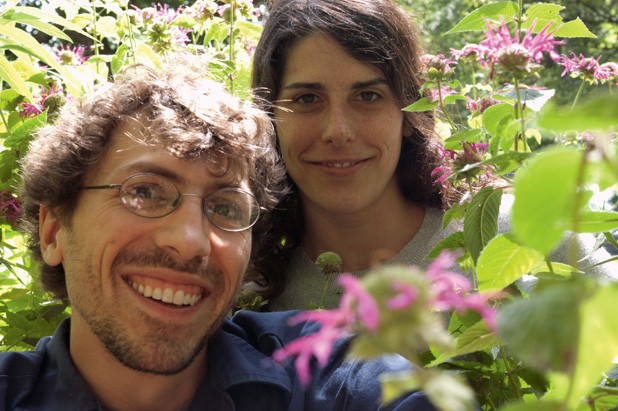 As a teenager, Ben Lanza had a knack for throwing parties. Not the Hey, my parents are away, let’s get a keg sort of thing. These were dance-until-10-in-the-morning ragers.

At age 16, Lanza rented a huge tent, booked Craig Mitchell and a gang of other Burlington DJs, and spread the word. Nearly 500 people paid a few bucks each to boogie the night away in a field at the Lanza homestead in rural Sheldon, Vt. And he had his parents’ blessing.

Lanza knew he was onto something. But the budding promoter probably had no inkling that his backyard throwdown would evolve into a family business.

Now Lanza and his wife, Jane Jarecki Lanza, both 28, are the brains behind the fourth annual Liberate Music & Yoga Festival and the owners of Eclectic Music Productions. They’re just days away from putting on this year’s three-day bash, with the help of a few employees and a cadre of volunteers. And they’re pretty calm about it.

“Maybe some things aren’t exactly finished, but if we didn’t get anything else done, the festival would still happen,” says Ben.

The couple sip tea on a serene, shaded porch at their home in Essex Junction as they talk about the nitty-gritty of creating a festival. Though they’re in crunch time, they don’t show any signs of stress. Maybe it’s all that yoga. Instead of venting about bands or vendors, Ben is enthusiastic about the finer points of logistical challenges or the dedication of volunteers.

One thing’s for sure: The Lanzas have learned a lot over the past four years.

“It’s constantly a learning game,” says Jane. “It’s kind of like high school or college — some chunk of education where you get through it and you say, Wow, I wouldn’t want to start that all over again, but I’m glad I learned so much.”

From the first Liberate fest, the Lanzas have done everything from changing trash bags to tracking down Band-Aids to talking with Vermont State Troopers. This time, they’ll be able to leave most of that stuff to others.

“The ideal situation would be to be able to put down the radio for a while,” says Ben, referring to the walkie-talkies they carry during the festival. “It feels like there’s a team in place this year to make that possible.”

Ben Lanza and Jane Jarecki met when they were students at the University of Vermont; both had already spent a couple of years at Boston University. When Ben returned to Vermont, he knew he wanted to host more huge dance parties.

“Part of the motivation for picking it back up was just how much I needed music, and that feeling that you get at certain times during a concert,” he explains. “When you really know, even feel, that you’re sharing something with the people in the room and they know it, too.”

So, in 2006, Lanza and a buddy started planning what they thought would be primarily a music festival. By that time, Jane was studying to become a certified Kripalu yoga teacher.

“I kinda had visions of huge yoga outside,” Jane says. “I started to recognize that that could be my contribution.”

The first Liberate festival took place outdoors on a summer day in 2008 at the Bundy Center for the Arts in Waitsfield. It began with yoga, and additional classes were interspersed between sets by local bands such as Twiddle, the Dead Sessions and Rubblebucket. The event was sparsely attended and the music stopped at 10 p.m., but the Lanzas knew how to improve it.

For starters, they were convinced the music had to go into the wee hours. After searching for a location that could accommodate camping and late-night sets, they decided to bring it back home: to the Lanza family spread. That allows Ben and Jane to experiment with the location of campsites, stages and parking. The site is large enough for future expansion — the Lanzas envision festival attendance in the thousands.

For now, they’re focused on pulling off this year’s fest without a hitch. They’ve improved the access roads, moved family camping to a quieter spot, and increased access to freshwater. And for the folks who were bummed there was no morning coffee vendor last year? It’s handled.

The musical lineup continues to evolve, as well. This year sees the return of a few perennial favorites, such as Rubblebucket and Twiddle, along with newcomers Conspirator, Ott., Marco Benevento and the Everyone Orchestra featuring multi-instrumentalist Michael Kang of String Cheese Incident. Yoga teachers Simon Park, Shyamdas, Prem Prakash and homegirl Jane Jarecki Lanza will keep attendees limber and mindful — even those who rock the late-night DJ tent.

As for Ben and Jane, they hardly get a wink no matter what happens.

“Sleep deprivation is a problem for us,” Jane concedes. “We have a hard time acknowledging there’s a huge, raging party in the backyard and not participating.”