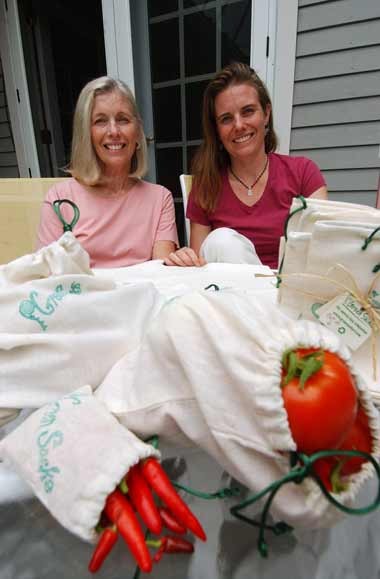 These days, many local shoppers at the checkout counter are way beyond "Paper or plastic?" They use Earth-friendly canvas bags or their own reused plastic or paper ones. But chances are, when those same eco-conscious folks are weighing bulk walnuts or picking out produce, they use plastic. After all, what are the alternatives? Allowing naked produce to loll on the checkout conveyer belt is pretty unsavory, and few think to tote a variety of vessels for their haricots verts or herbs de Provence.

Colleen Brooker, 32, and her mom, Carol Rose, don't like the rolls of skimpy, wasteful, hard-to-open plastic pouches that are widely used for fruits and veggies. "I passionately hate those bags," says Brooker. "You end up with all this plastic in your fridge, and they end up in your drawer, and you end up with so many of them." Since March, the mother and daughter, who live in East Montpelier and Calais, respectively, have been sewing up an alternative.

Brooker and Rose produce and sell a line of washable, unbleached muslin sacks in five sizes. Costs range from $3 for an extra-small (4 x 5 inches) to $6 for an extra-large (12 x 17 inches). Various sets are available for $22 or $32. The receptacles, which the women refer to as "your canvas bag companions," can hold anything from whole cloves to tall celery stalks. You can even pack ground spices into the little guys, Brooker suggests. After transferring the fragrant powder to a container, just flip the bag inside out and give it a couple swipes with a basting brush to remove any residue. Loose curry powder or turmeric will eventually give the cream-colored cloth a natural golden hue.

The ladies of Green Sacks, as their business is called, make the occasional appearance at the Montpelier Farmers' Market to peddle their wares, but this isn't a full-time gig. Both work other jobs and are outdoor enthusiasts who take advantage of the limited summer days for gardening and spending time on the water. The one brick-and-mortar business they currently supply is L.A.C.E. (Local Agricultural Community Exchange) in Barre, although they're looking to expand to other co-ops and grocery stores.

Rebecca Beidler, a cook at L.A.C.E., thinks the concept is great. "We decided to carry them to reduce the waste of people using bags . . . to bring more awareness to the idea of reusing things," she says. But while Beidler and some other L.A.C.E. staffers have purchased a few of them, the bags aren't flying off the shelves quite yet. Beidler thinks the idea of spending money on something that is typically "free" can take a little while to sink in, even if it is good for the environment. Her final word on the subject? "They're especially good for produce."

Brooker became more attuned to the plastic problem during her extensive travels as a student and beyond. "I studied in Nepal in college . . . We [Americans] would hang on to waste not knowing what to do about it, just wrappers and things," she recalls. "They [the Nepalese] would take it and throw it out the window into the field." She saw the same thing happen with Styrofoam cups on a train in Thailand. For a youngster from recycling-friendly Vermont, the relaxed attitude toward garbage was a shock.

It wasn't until she visited Fiji that Brooker came to understand why people in the developing world might dispose of waste so casually. "The people . . . would come down to the water and sell food, and they'd carry the food in palm leaves," she says. When they were done, the palm-leaf "wrappers" were tossed into the ocean to break down naturally.

"We all used to use biodegradable things," Brooker muses. And when we did, tossing them out the window or into the water was no problem. She speculates that the Fijians and Nepalese people may not realize that plastic doesn't act the same way when exposed to air and water. "It's the modern way. We're passing it along," Brooker says bitterly.

How did she go from awareness to activism? The unusual undertaking was spurred by a radical friend, Ashar Chinook, Brooker had met in her travels, who "is very dedicated to living simply and being as Earth-friendly as possible," Brooker relates. "She had made these bags just out of scrap material that she would use for bulk [goods] and for bread." After a hiking trip together 10 years ago, Brooker inherited one of the canvas-like creations. She encouraged Chinook to sell them, but becoming a capitalist didn't jibe with the eco-warrior's sensibilities.

In retrospect, Brooker isn't sure the idea would have caught on at the time. "I think now there's a lot more general [environmental] awareness," she suggests, citing Al Gore as a positive influence.

Last year, Chinook trekked to the Green Mountain State to pay Brooker a visit, and the bags came up in conversation. "She said, 'You should make them here,'" Brooker reports. "This would be a really good place for them." The duo brainstormed a few ideas and jotted them on a scrap of paper. Once Chinook left, "The piece of paper just sat there," Brooker says.

But that changed when she broached the topic with her mother, a skillful seamstress. "She brought this idea, and then we sort of did some sketches," says Rose. "I got some material of the kind Colleen was thinking about and did a prototype."

The current production process is highly efficient. "I was a sewer for years," says Rose. "So I came up with sizes that let us get the most out of material without having any waste . . . The extra-larges are pretty much just a straight cut; we make the smaller bags out of what's left over."

Years before Brooker became an environmentalist and organic gardener in her own right, Rose introduced her to "green" living, raising her with post-hippie ethics. "I used cloth diapers on her in the early '70s when everybody used Pampers," she boasts. "I've always hung my laundry out to dry." In natural-foods stores, "We used big canvas bags for grocery shopping," Rose recalls. But for oats and onions? "We either used paper or plastic."

Their alternative seems to be catching on. "I do some of my shopping at a conventional store as well as the co-op," Brooker says. "And at both stores, the cashiers are very interested. One of them asked me for my card." At stores that cut a few cents from the bill when customers pack their food in their own bags, the Green Sacks can be money savers, too.

The creative flow doesn't stop with the creators. According to Rose and Brooker, customers find new ways to use the simple totes. One woman employs a Green Sacks model to organize items in her purse. A vendor at the Waterbury Farmers' Market who sells handmade cutting boards ordered some to use as holiday gift bags for his products. Once the board is unwrapped, the bag can be reused for - you guessed it - groceries. Says Rose, "We didn't expect it to go that way, so it was a surprise little twist."

Asked about plans for expansion, the green queens say they're open to making new shapes and sizes, but aren't ready to move into the big canvas-bag market. Why not? "There are so many people making canvas bags and nobody making the little ones," explains Brooker.

A quick trip to the Internet turns up a couple sources, but they certainly aren't local. However, some do showcase organic cotton. The Green Sacks gals would switch materials if the price was right. "People have asked us about using organically grown cotton, but we haven't found a good source," Brooker continues. "It's expensive."

Green Sacks' owners are still feeling out the market. "We're just beginning, but I feel that they've gotten a lot of positive attention already," says Brooker. "My friend who had the idea [for the bags] is very extreme in her ways. I respect her choice, but being the mother of two little kids, I can't necessarily be that extreme." Still, she points out, "There are little things we all can do to reduce our waste."