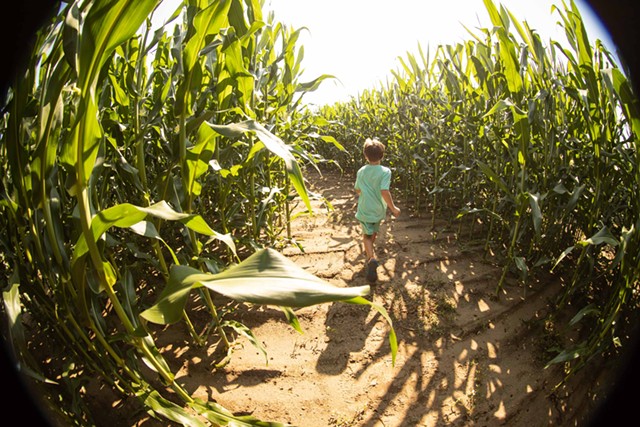 Getting lost is all part of the experience at Sam Mazza’s corn maze, where three and a half miles of paths are carved into eight acres of corn behind Mazza’s Farm Market in Colchester.

Open daily from Labor Day through Halloween, this year’s maze is divided into two separate labyrinths, an 0.8-mile maze and a 2.7-mile maze. It’s all dedicated to Gary Bombard, who died in January. Bombard, the husband of Mazza’s oldest daughter, Laurie Bombard, started Sam Mazza’s petting zoo and maintained it for two decades before the farm made the difficult decision to close it late last year due to Bombard’s illness. The smaller maze is shaped like Annie the Pony, who was part of the beloved petting zoo, while the bigger maze contains three images: a white-tailed deer with big antlers, a nod to Gary Bombard’s love of deer hunting; Zak, the petting zoo’s late Scottish Highland steer; and the state of Vermont with a heart in the middle. Inside the heart, maze-goers will find two big, cylindrical bells to ring. 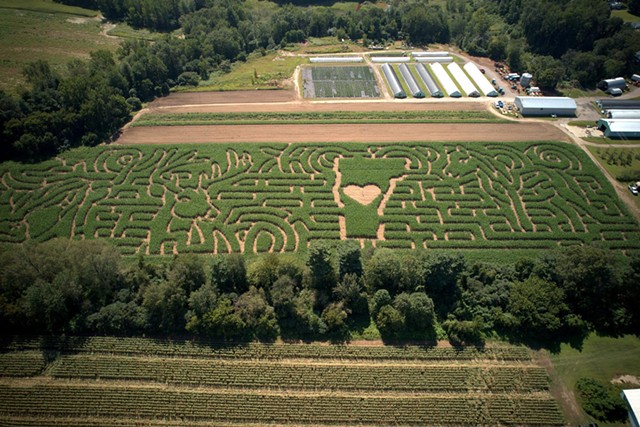 The two mazes do not connect, but one ticket gains you entry to both. Most families complete the small maze in 30 minutes and the larger one in an hour or less, said Laurie Bombard, one of the owners. Participants are given a map, which shows the location of 12 checkpoints — six in each maze. Each checkpoint has a uniquely shaped paper punch to allow people to mark their progress on a card. 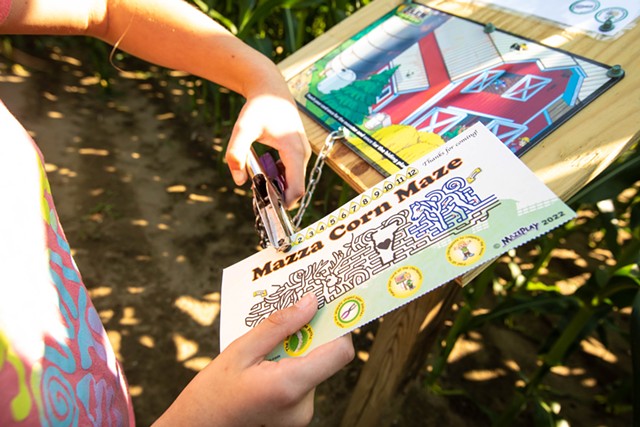 Collecting all of the punches “depends on how well you can read the map to find a checkpoint or whether you’re even looking for the checkpoint,” Bombard said. “Some people just choose to wander around in the maze. You can do it however you want.”

My family and I decided to give the big maze a go late one afternoon during opening week.  As we stepped onto the soft dirt, we were swallowed by seven-foot corn stalks. Most of the pathways are wide, though, and we found our first checkpoint right away. We were on a roll, following the map, which successfully led us to the checkpoints and, finally, to the heart at the center of the Vermont image. My kids had a great time ringing the bells, which clanged loudly. 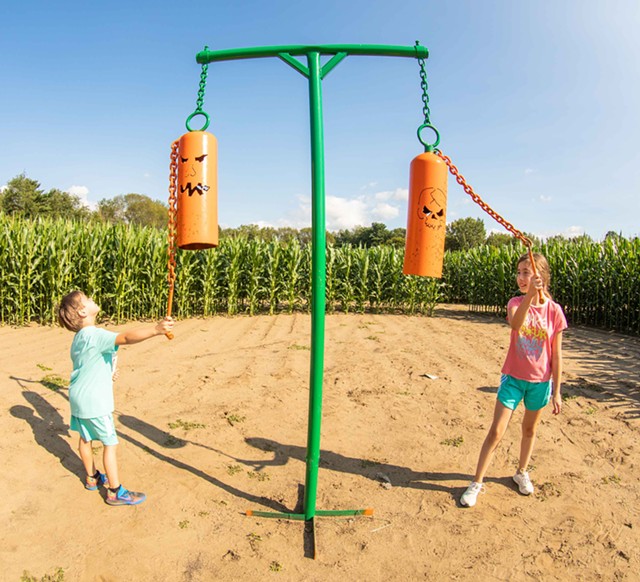 In our 50 minutes in the maze, we could hear other maze-goers, but we didn’t see anyone. After the bell area, we took one turn, then another, and we realized we were lost.  We must have walked in a circle because we ended up back at the bells, where we got our bearings again, hit all but one of the remaining checkpoints and found our way out.

At the end, you can enter your punch card to win a prize, even if you didn’t reach every checkpoint. This year’s prize, which has yet to be determined, will be awarded in early November.

Mazza’s corn maze — a tradition for at least 15 years — attracts between 7,500 and 8,500 people annually. Other fall activities at the greenhouse, bakery and market include wagon rides, pumpkin picking and the Vermont Giant Pumpkin Growers’ annual giant vegetable weigh-off, scheduled for noon on September 17 this year.   “We started doing our hayrides on the weekends a lot earlier than we started the corn maze,” Bombard said. “People brought their kids out as babies. Now, some of those kids are working for us. It’s become a family tradition to do the hayride, and I think the corn maze has become the same thing … It’s a good family activity.”

“They plant the design right into the field,” Bombard said. “The paths are there right from the time the seeds start to grow… I’m always nervous the corn isn’t going to get tall enough. But we got that nice rain, and it grew about a foot in a week so it’s perfect right now.”

Maze tickets are $11 for ages 12 and up, $6 for ages 3 to 11 and free for kids under 3. The maze is open Monday through Saturday from 10 a.m. to 7 p.m.; and Sunday from 10 a.m. to 6 p.m. Last tickets are sold one hour before closing time. Bring water because the maze heats up even on a cool day, but leave your dogs at home; they are not allowed. Learn more at sammazzafarms.com/corn-maze.