Conquering Climate Change One Business at a Time

When Paul Costello and his team of organizers started putting together a conference on climate change a few months ago, they decided this one wouldn't be about politics or public policy.

Instead, they opted to celebrate entrepreneurs who are trying to combat climate change while also generating jobs. They dubbed the event Catalysts of the Climate Economy: A National Innovation Summit.

The event attracted a swarm of burgeoning businesses from Vermont and around the world that have found ways to put waste to work, encourage carbon-friendly consumer habits and solve electric grid challenges.

"It's that next generation of entrepreneurial vision that are really the heroes," said Costello, executive director of the Vermont Council on Rural Development.

Here's a look at three Vermont-based emerging enterprises that took the stage during the September 6 to 8 conference at the University of Vermont. Each offers climate solutions — one water heater, scooter or compost heap at a time.

By the end of the year, 100 Green Mountain Power customers will have a small blue box attached to their electric water heaters. With the help of a Wi-Fi connection, the device will prompt the heater to draw electricity at times when energy is most abundant, without requiring any human intervention.

Packetized Energy, the brainchild of three University of Vermont electrical engineering professors, created the gadget and the software behind it.

Their goal: to even out demand on the electric grid to better accommodate intermittent power provided by wind and solar projects, according to cofounder and UVM associate professor Paul Hines, who collaborated with colleagues Jeff Frolik and Mads Almassalkhi.

"If you don't have flexibility in the system, you're not going to be able to use wind and solar," Hines said. "We're making the grid more reliable."

Packetized has so far focused on water heaters, but Hines said the company is adapting its technology to other appliances, including air conditioners and electric car chargers.

A car charger draws six times the power of a typical home, Hines said. If five families in a neighborhood have cars plugged in at the same time, "you could have some serious problems," he said.

Using its internet connection, the device reads information from the utility about its power supply. When demand is high, it asks the water heater to wait. When demand is low, it tells the appliance to come on. Residents can adjust the timing if they know they'll need a lot of hot water at a certain time, according to Hines.

In addition to its contract with GMP for 100 Packetized Energy devices this year, the company has a contract with Vermont Electric Co-op to install 300 in 2018, he said.

GMP is eager to work with Packetized to reduce irregular electric demand, which in turn reduces the need for costly upgrades to the distribution system, said Josh Castonguay, the utility's vice president of innovation.

"They're part of the solution," Castonguay said.

There's nothing novel about directing appliances to operate off-peak, according to Castonguay, but Packetized has automated the process, allowing utilities to control supply and demand on short notice without affecting customers.

Hines said there are similar products on the market that automate an appliance's energy use, but Packetized's process is simpler, cheaper and gives the utilities more nimble control.

Packetized is very much in startup mode, relying heavily on a revolving group of paid interns. Company "headquarters" consists of a few countertops in a corner of GMP's office building in Colchester, space the utility offers free of charge to select fledgling businesses. It has the look of a cluttered basement workshop, with boxes of electronic gadgets placed alongside bags of trail mix.

But Packetized's work is getting attention, and its founders have big plans.

In 2015, Hines and his team won a $1.7 million grant from the U.S. Department of Energy, money that went to UVM to fund the team's research.

Now, Packetized is moving out of the research lab and into the marketplace.

At this month's conference, the company won a $15,000 prize, besting 23 other contenders with its pitch for providing real-life solutions to climate challenges.

Within a year, Hines hopes Packetized will have 10 to 20 employees, up from the current full-time equivalent of three. Hines said he or one of the other cofounders might leave UVM to run the firm. The low-key scientist left little doubt that he considers Packetized worth the risk of giving up a tenured university job.

At Foster Brothers Farm in Middlebury, long, neat berms of compost sit on concrete pads in various stages of rot. Eventually, the product will be sold in bag and bulk form at stores across New England. In the meantime, this rich brown mix generates considerable heat.

That's long struck farm owner Bob Foster as wasteful. "We've been trying to find out how we can capture that," he said.

Last winter, Foster Brothers did just that with the help of a system created by Agrilab Technologies, a company based in entrepreneur Brian Jerose's Fairfield home.

The company's patented aeration system captures the compost's thermal power, drawing hot, steamy vapor from the decomposing matter and turning that hot water into thermal energy that can be put to use on the farm.

Foster reuses the heat to both speed the composting process and keep the 70-by-80-foot compost-bagging facility at a comfortable temperature for workers. How much heat goes where can all be controlled electronically.

Foster said the farm has reduced propane use and cut the time required for compost to mature from three months to one.

Last week, Agrilab Technologies workers were installing more piping and an additional control panel that will allow Foster to capture even more heat from more compost. That additional thermal power could allow the farm to run a year-round greenhouse or heat a new automated dairy barn now under construction.

Foster received several grants to help pay for the system, he said, which cost $350,000. Asked if he thought it would pay off, Foster offered a mix of optimism and farmer's caution. "We'll see," he said.

Systems like the one at Foster Brothers are the result of decades of work Jerose has done in the fields of composting and watershed protection. The company's trajectory was not without hurdles, Jerose said. Five years ago, his 57-year-old business partner, who marketed the company, died suddenly of an aneurysm.

Now the company is gaining exposure, including through participation in this month's climate conference, he said. Technology has allowed him to increasingly automate the aeration process. And, he said, while other companies have processes that speed composting, Agrilab is the only one that captures the thermal energy for reuse.

Agrilab has installed similar systems in five northeastern states and recently completed its first overseas project, in Wales, according to Jerose. Customers include farms, municipalities and institutions with large compost facilities.

By capturing heat already being generated through the compost, Jerose is reducing demand for fossil fuels, cutting greenhouse gas emissions and increasing the production of compost, which in turn enriches the soil. "I really believe we're doing something that packs a lot of benefits," he said.

Foster, a third-generation farmer who's been creating compost since 1992, agrees. "I like to close the loops," he said. 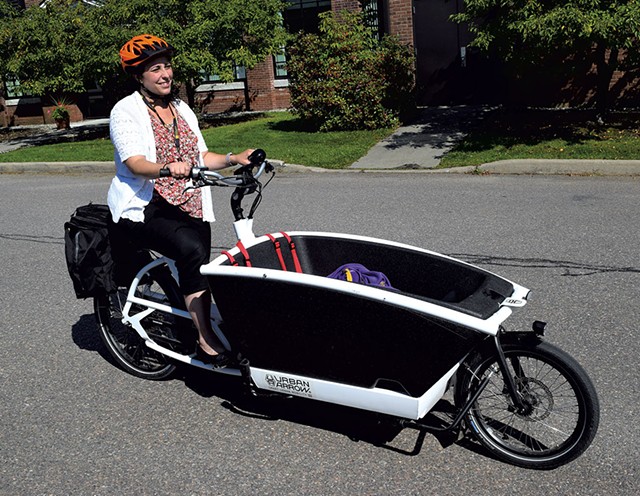 Stephanie Phillips rides from her home in Burlington's New North End to her job at Vermont Energy Investment Corporation in the South End on a Dutch-made electric-assisted bike. It comes with a front-facing cargo bin big enough to carry her two young children, negating the need for a car most of the year.

Phillips acquired the bike in January with the help of a reimbursement from her employer that's designed to encourage environmentally friendly lifestyle choices. Just as some companies offer wellness benefits that include discounts for gym memberships, VEIC is providing incentives for employees to go easy on the planet.

More employees at more companies around the country could get help making similar purchases if a new venture launched by VEIC takes off. The company spun off the operation, Sustainability Benefits, this spring, with the mission of managing similar incentives for other employers.

In addition to VEIC, Seventh Generation, NRG Systems and the city of Fort Collins, Colo., are customers. Company president Andy Vota is looking for more.

"Hopefully, we'll be announcing new customers in the next few weeks," he said. "We're hustling."

Companies pay Sustainability Benefits a per-employee fee to manage the benefit. That work includes surveying employees with a detailed set of questions to measure — and track over time — their household carbon footprint.

In the 10 years since VEIC started offering a sustainability benefit, its employees have lowered their carbon footprint by 24 percent, according to Vota, who was a VEIC employee before leaving to run the spin-off.

Vota acknowledged that some employers struggle just to provide health insurance benefits and a 401(k) retirement plan. But he argued that many are looking for creative ways to distinguish themselves from competitors and to help the environment.

"In the future, we think it's going to be a way of looking at employee benefits," he said.

Next month, Vota will talk up the value of Sustainability Benefits at the finals of FreshTracks Capital's Road Pitch 2017, a competition for Vermont startups. He will be competing for $4,000 and a year of mentoring. He won $500 in August at a qualifying Road Pitch round in North Hero.

When marketing to employers, Vota said, he emphasizes that the sustainability benefit particularly resonates with the millennial generation.

Nessy Arbour, a 28-year-old VEIC employee, said that's true for her. She said she's received money to help pay for a scooter, a farm share, soil and seeds to start a garden, and an energy-efficient countertop dishwasher.

Employees are eligible for a few hundred dollars a year, which they can use toward qualifying purchases or save for up to five years.

Arbour, who got 75 percent off her farm share and 50 percent off her gardening supplies, said she would rather get those reimbursements than have the company increase her salary by an equivalent amount.

"I'm a frugal person, and I probably wouldn't spend the money in this way," she said. "It feels like less of an indulgence."

Next year, she's thinking she might use the benefit to help buy a bike.