Connected to Laura and the World

Burlington marches for Laura Winterbottom, and against sexual violence 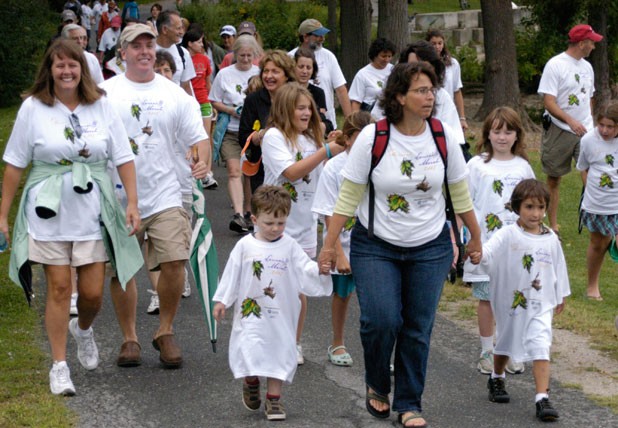 This was Cheryl Hanna's keynote address at the Second Annual Laura's March, in remembrance of Laura Kate Winterbottom and a fundraiser for the Women's Rape Crisis Center, on September 6 at Oakledge Park in Burlington. Seven Days is publishing her remarks to underscore the ongoing effort to eradicate violence toward women. Hanna is a professor at Vermont Law School and a constitutional scholar. Laura Winterbottom was raped and murdered in Burlington three years ago. For more info or to donate, contact Kristine Bickford at the WRCC at 864-0555 ext. 12.

I am so happy to be here with you today. I was honored when Joanne Winterbottom [Laura's mother] asked me to speak with you this morning. I have to be honest. I'm not much of a walker. I'm not even sure I own a pair of sensible shoes. But I have spent much of my career working on issues of violence against women, and so I am particularly happy that I can partake in this wonderful effort by running my mouth for a few minutes about the significance of what you do here today.

When Joanne Winterbottom and I first spoke, I said to her that while I had never met Laura, I had come to feel as if I knew her. But then I thought, what does it really mean, to know Laura?

The more I thought about it, the more I realized that to know Laura is really to be connected to Laura in the way that all women, I think, are connected to each other.

I don't want to leave out the men, because those of you who are here today are wonderful - but women do experience the world differently.

For there is not a woman alive who doesn't understand at some level that, at any time, she can be the victim of sexual or physical violence, simply because she is a woman. Young or old, rich or poor, black or white, straight or gay, every woman carries with her that intuitive sense that she is at risk.

And that never-ending threat of violence often limits how we live our lives and influences the choices we make. It keeps us from living as if we are truly free. It is that voice in our heads that tells us to "be careful." And we are careful, often too careful, in ways that limit our true potentials.

Now, I know it can feel so disempowering to acknowledge how we, as women, share this common burden. And yet, I take great comfort in recognizing that none of us is alone in this struggle. Because what burdens us also bonds us, and it is that bond which gives us strength to resist the violence.

In the many years that I have been working on these issues, I have seen the world dramatically change, and so what I would like to do with you here is to reflect upon those changes.

It used to be that men had the right to beat their wives, to keep them in line. Historians tell us that the phrase "a rule of thumb" refers to legal doctrine that held a man could chastise his wife with a switch no larger than his thumb.

It used to be that a victim of rape, even if she had the courage to testify at trial, would have her entire sexual history paraded before the jury. It was acceptable to argue that once a woman lost her virginity, she couldn't be raped because she was "damaged goods."

It used to be that too many men went to prison not because they harmed women, but because being a minority or being poor made them guilty.

Now, we have seen every state and the nation undergo law reform unprecedented in American history, including the Violence Against Women Act. Passed in 1994, this federal law recognizes the seriousness of sexual and domestic violence. It has supported many, many programs, including those here in Vermont, and has provided safety and security for thousands of victims.

Now, we have committed police and prosecutors who take violence against women seriously, and many of those fine people are here with us today, and you should thank them, because they often do not get thanked enough.

Now, courts try to shield victims from inquiries into their private lives so more women can go to court and tell their stories, and seek the justice they deserve.

Now, with the introduction of DNA evidence, we are much more likely to ensure that the right man goes to jail, and many men wrongly convicted have been freed through efforts like the Innocence Project.

All of this has brought a safer and more just world for women and men alike.

Of course, there is much more progress to be made, but the tide of change continues to sweep forward in ways that just a generation ago seemed unimaginable.

Some of the progress that really excites and inspires me is taking place internationally. We often hear much more about what is happening in our own backyard, but let me take a few minutes to connect you to some of the initiatives to end violence against women worldwide.

In 1993, at the World Conference on Human Rights in Vienna, world leaders came together and recognized that the right to be free from domestic violence and sexual assault was a basic human right.

Think about that: a basic human right. Like food and shelter, safety for women was deemed essential for humanity. Indeed, ending violence against women has become the most important human-rights issue of our time. For we know that the status of women in a country is an important predictor of the standard of living in that country. Sexual violence keeps women and children in poverty and is a major barrier to social and political reform.

Because of that recognition, the international community, including the United Nations, has said to nation states that if you want to be part of the modern global economy, you have to take responsibility for ending violence against women.

One of the most important developments has been that much of the international community has rejected arguments that "traditional practices" such as honor killings and female genital mutilation should be exempt from international scrutiny. Rather, these practices are a form of gender discrimination and have to stop. These efforts are working, as both practices are now in decline.

So too has the international community come to recognize that rape is a war crime. In the Bosnian conflict alone, more than 20,000 women were raped.

In 2001, for the first time in world history, the International Criminal Court at the Hague prosecuted a case of rape in the context of war as a crime against humanity. There continue to be prosecutions and increased efforts to keep women in war zones safe from this humiliating and brutal tool of armed conflict.

Women in places like Rwanda and Kosovo and Darfur now have the force of the international community to say what happened to them was wrong.

We have also seen continued efforts both at home and abroad to curb human trafficking in the sex industry. More than 700,000 women and children worldwide have been trafficked into what amounts to modern-day slavery.

In the United States, the government estimates that, each year, more than 50,000 women and children live essentially as sex slaves. Most of them come from countries with poor economic conditions and abysmal human-rights records.

And let me share with you something I was recently shocked to learn: More than 50,000 Iraqi woman and girls who are refugees - most widowed or orphaned - sell their bodies in countries such as Syria and Jordan simply to survive. This is yet another way women suffer when we wage war.

Yet these women are not invisible.

In 2000, the United States passed the Trafficking Victims Protection Act to provide assistance to those trafficked to the U.S., and, just last year, the United Nations launched a global initiative to fight human trafficking. I remain optimistic about the potential to really curb trafficking worldwide.

Finally, let me share with you what I am most excited about these days. Last October, Senators Joe Biden and Richard Lugar - a Democrat and a Republican - introduced the International Violence Against Women Act, or what we call IVAWA.

This bill will provide resources, training and guidance to alleviate violence against women around the world. It has the potential to transform how nations address these issues, and allows the United States to take a major leadership role in promoting human rights worldwide. I hope that, no matter which candidates you support this historic election season, you support this law.

So, while we may not be there yet, we are on our way. And don't underestimate how important it is to connect what is happening to women on the streets of Burlington to what is happening in Bangkok and Baghdad, and to bear witness to the truth, as you do here today.

I recognize that all of this progress, from this march in Burlington to prosecutions in the Hague, is born of loss and tragedy and sorrow. But there is something about the human spirit, the resilience of women and power of our common bond, along with the courage of the good men who stand beside us, that transforms that sorrow into action, turns that grief into something good. The Laura Kate Winterbottom Fund is a triumph of that human spirit.

So, while I know that this march today will not heal your broken hearts, I do hope it will nourish your souls. For you walk today not only in Laura's memory, but also in memory of the 340 women in a small city in Mexico killed by a serial rapist whom the government never bothered to pursue.

You walk not only for Laura's Room at the Women's Rape Crisis Center, which will provide a safe space for women to heal, but also for the woman in a hospital room in India, burned in the face with acid for turning down a marriage proposal, and abandoned by her community.

You walk not only for Laura's Kits, which will be used in schools for children affected by domestic violence, but also for that lonely little girl in Thailand, held captive in a brothel, who dreams of one day being free.

Many of you may know that the name "Laura" comes from the Latin word for laurel, which is a plant - sort of like a bay leaf - that was once woven into crowns. In ancient Greece, a crown of laurels was placed on the head of the victorious. It is a symbol of triumph.

So my hope for you all is that, as you walk today along this beautiful path on Lake Champlain, you imagine a crown of laurels upon your head, and that you feel connected to Laura and to each other, and to those across the globe who share your commitment to end violence against women, one step at a time.