Conifers for the Win: Planning for Your Winter Garden 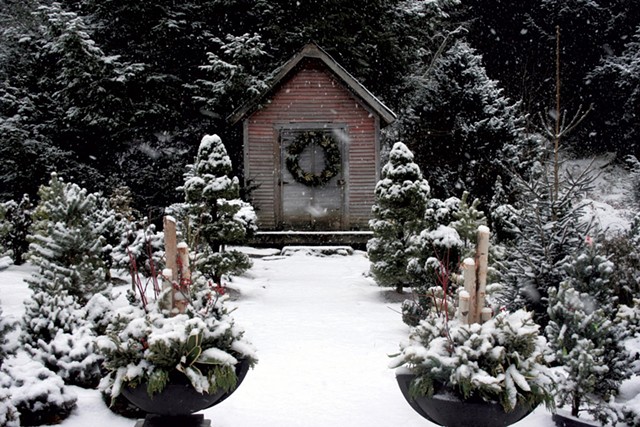 When I bought my home in Burlington nine years ago, a huge selling point was the gardens. Both front and back yards were terraced with stonework, and the previous owners had planted loads of perennials, a phalanx of privacy-creating cedars, a magnificent magnolia and a peach tree that actually bears fruit.

Though the place was already lovely, I began to fantasize about changes I wanted to make ... and quickly came to the conclusion: Who am I kidding? I don't have time for this.

So I hired a gardener. And when we met, the first thing she asked me was, "What do you want to look at in the winter?"

"Well," she explained patiently, "we have a lot more winter than summer."

True enough. So she schooled me on the virtues of conifers, plants that produce cold-weather berries, and shrubby things that reveal intriguing shapes when their leaves are gone. In other words, plants that look good with snow.

Soon after, we headed down to Rocky Dale Gardens in Bristol, her nursery of choice. I purchased three distinctively different conifers. I couldn't tell you their botanical names, but one is tall and thin with long, small-needled branches, another is "weeping," and the third is mound shaped.

And, indeed, they have made my backyard more interesting through the long winter. Snow clings prettily to their needles. Birds like to hide in the taller ones, when not darting out to the bird feeder nearby. And the trees' placement blocks the neighbors' otherwise unobstructed sight line into my kitchen.

One thing, though? Two of the vertically oriented conifers were supposed to be dwarf varieties. But they did not get the memo; both have become much taller than I expected and are now jostling each other for space. (That gardener moved out of state, so no help from her.) I thought "dwarf" meant they would stay small — a scale appropriate to my modest backyard.

"They'll keep growing if you don't prune them," Ed Burke informed me with a chuckle. "If a tree stops growing, it's dead." The landscape designer is the owner of Rocky Dale, where I recently returned to find out more about winterscaping — and what to do about my crowded trees.

Burke bought the nursery in 2004 and still maintains his longtime landscaping business in Minneapolis; nursery manager Amy Rose-White has been there 20 years. Both are delighted to walk through their lush gardens and wax passionate about plants of any kind. In this case, I wanted to talk conifers.

"The winter garden has always been a focus of landscape designers," Burke said. "In Vermont, we have so much snow that the herbaceous plants really don't hold up."

That said, he pointed to a contorted beech (Fagus sylvatica "Tortuosa"), as well as winterberry (Ilex verticillata), a holly native to Vermont that has edible — for birds and small mammals — red berries. "In this climate, that's the No. 1 deciduous plant," Burke noted.

We looked at trees with twisty, or contorted, shapes, which can appear like sculptures against a snowy backdrop; and weeping trees with gracefully drooping branches. Trees with interesting bark can also complement a winter landscape, Burke pointed out. I spotted a lovely Japanese maple, one of which my yard already has. Its red leaves are a gorgeous contrast with the prevailing greenery now, but the tree admittedly isn't much of a looker in the winter.

Among the mature trees on the Rocky Dale property are clusters of tall and handsome spruces, firs and pines. "There are many varieties of blue spruce," Burke said. "Some weep, some crawl, some are contorted. White pine has softer needles, so snow doesn't gather," he added. "Others, with stiff needles, are better snow collectors."

Two other trees I took note of were Alaskan cedar, with a straight trunk and pyramidal form; and the Korean fir, which is fuller and denser and has two-toned needles. The latter evergreen is said to be slower growing and compact, and I'm thinking it would have been a better choice for my yard.

But here's the thing about plants: They can be thinned out and taken out, moved and replanted elsewhere, if their roots are not too deep. "Overall, early spring is best for [moving] established trees," Burke advised. "The roots are more compact. But don't plant them too close!"

As we walked around the three-acre property, it was clear he looked at landscape as something to alter. I always thought trees were forever (unless they got diseased or struck by lightning); to Burke, removing or relocating just about any plant is no big deal. A new flower garden here, a hedge there, a clearing for events such as weddings. Solving a crowding problem with a pair of not-too-intimidating trees started to seem easy.

Along the way, Burke offered some general thoughts about conifers. For starters, "They're generally the most expensive plants in the nursery," he said, suggesting you should study up to make the right choice for your yard. "The key is selection. Know the growth habit of the tree. Plant perennials and shrubs around it — they can be moved when the tree gets larger," he said.

"We're known for our conifers," Burke continued, "though about half of our business is perennials. We find with conifers people can become collectors. They really just keep giving." To that point, he handed me an informational sheet listing numerous varieties, along with their qualities and details about care and feeding.

Plants are not the only story in a yard, though. Homeowners should also consider hardscaping — that is, stonework, weather-resistant sculptures, fencing or other features that form the architecture of the space. I've installed a number of concrete sculptures by a local artist, each of which presides over a section of my garden — and contributes to the winter view. One of them, however, is about to disappear under that weeping conifer. Somebody will just have to move.

How to Plant a Conifer

Fall is a good time to plant a tree — up until mid-October in most Vermont locations. You'll want to be able to keep the roots well moistened before the ground freezes. After you've selected the right tree for your yard, and taken into account soil and drainage conditions, follow these steps to give your tree a healthy head start.

Choose your site and then dig a hole that's two to three times wider than your tree's root ball — but not deeper than the ball's height. One of the most common planting mistakes is to go too deep.

Loosen the soil on the sides of your hole, but not the bottom. If your soil is heavy, create a small mound at the bottom to raise the root slightly higher than ground level. You want water to drain away from the trunk.

If your baby tree was grown in a container, remove it and tease the roots apart with your fingers or a tool. If your tree root is balled and burlapped, leave it in the burlap prior to planting. Lift the tree by its root ball or container, never by the trunk.

Center the plant in your hole. If it's in natural burlap, pull back the fabric from the top third of the root ball. Synthetic burlap and twine should be completely removed. If the root ball has a wire cage, use a wire cutter to remove the top two-thirds once the root ball is in the hole. Do not leave any material around the trunk.

First fill the hole with water two or three times, waiting each time for the water to drain. Mix the soil you dug out with one-third organic matter and add it to the hole. Water again, and add more soil mixture when it settles. Do not compress or tamp down the soil.

Create a large bowl shape around your planting — this will hold water. Mulch this with two to four inches of shredded leaves or bark. Do not pile mulch against the tree trunk.

Again, it's important to keep your soil moist, but not drowning, before winter. If your tree's root ball came from a lightweight container mix, it will dry out faster than the surrounding soil. But if your yard has heavy clay soil that doesn't drain well, be careful not to overwater. If you can, leave a hose at the base of the tree for an hour, with pressure at a trickle. This should allow water to fully absorb into the soil. Rain will do this job for you, but if it's dry, keep an eye on your new planting and water as needed.