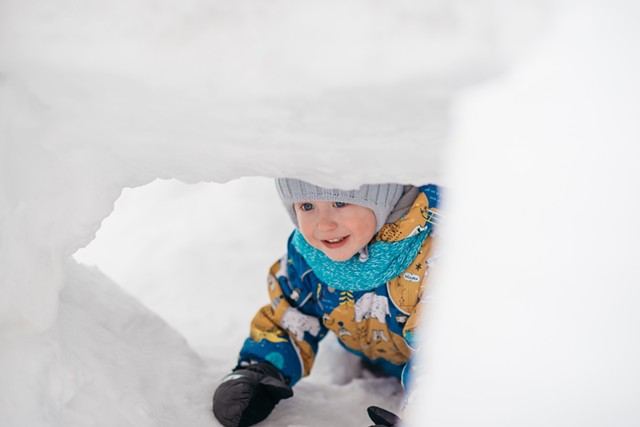 In our December/January Issue, we asked kids to describe what they’d build with an unlimited amount of snow. Below, find the imaginative winning entries. Sophie and Harper each receive a $25 gift certificate to Crow Bookshop in Burlington.

I would build a snow fort, and it would be EPIC! It would have a thick snow ceiling, and a snowflake in the floor like in Elsa’s (from Frozen) ice castle! The walls would be made of ice, so you could see through. It would be two stories, and on the second would be my room and library.

If I had the ability to use all of the snow in the world to build anything in the world, I would build Hogwarts castle from Harry Potter. It would have rooms with fluffy snow cushions and soft snow bedding. And they would have snow tables to eat their meals at. For classrooms, they would have lots of snow spell books and snow wands to cast spells. There would be snow cakes with hot honey and they would drink melted snow. For fun, they would build snowmen and make snowballs to have a snowball fight. If someone was being mean, then they would go to the snow dungeon and not get to eat a good meal. And now, since you know about what I would build, I will see if I can build it on a snowy day!

Find the latest writing prompt in the Just for Kids section of our February issue. The deadline to enter is February 15. Happy writing!