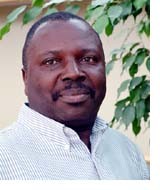 Continuing our jump into theater, Champlain College's first City of Refuge Visiting Writer and internationally acclaimed writer and intellectual, Pierre Mujomba, will be at the Alumni Auditorium to speak of his life on April 7th. Mujomba's speech, "A Writer in Exile: Reflections on Censorship and Freedom," draws from his views on censorship, and the hardships he had with artistry and expression as a playwright in The Democratic Republic of Congo.

Mujomba, who formerly worked as an African linguistics consultant at MIT, Boston University, and Brown's African Studies Department, fled the Congo in 2003 after the publication of his best-known play, The Lost Envelope. He has been awarded the Roger H. Perry endowed chair, and has spent much of his time at Champlain lecturing to classes and writing plays. Mujomba has a fascinating story, and is certainly worth seeing.

The event is free and open to the public. Doors open at 6pm.