Confessions of the 'Queen of Halloween' 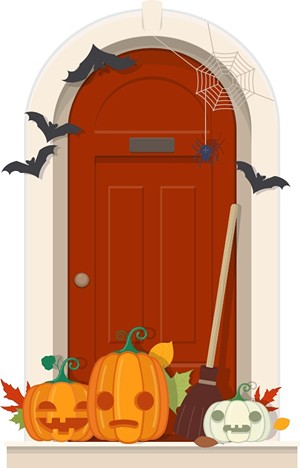 "Halloween is fun to decorate," Martha Stewart proclaimed on a visit to the "Today" show last October. "You do not have to spend a lot of money; it's just creativity," she said, gesturing casually toward an eight-foot tree on the set behind her. Its trunk and branches were painted black, and it was festooned with glowing paper lanterns, plastic spiders, cobwebs, balloons and lacy cutouts.

A few years before, I'd have googled "water soluble paint" faster than you could say "hocus-pocus," then headed out to the yard to forage a tree limb. Now, I know Martha left out an important part of the equation. It's not just creativity. It's creativity plus time — and I just don't have the time.

When I was a kid, I went trick-or-treating in street clothes, wearing a plastic mask my mother had purchased from a rack near the cash register at the local supermarket. She had four children. There was no way she was sitting down to sew costumes. My mask managed to be both cold and sweat-inducing at the same time. It made me look like an embalmed princess. Still, I had fun, and even managed to find the houses that gave out full-size chocolate bars while peering through those razor sharp eye holes.

Not long after my own trick-or-treating days were over, at age 19, I became a mother, unprepared and unmarried, in an era when the latter was frowned upon. I promised my daughter, all of 4 hours old, that I would ace the mom thing.

Like me, she loved Halloween. Unlike me, her first real costume, complete with sparkly cape and an elaborate bird mask, was homemade.

Score one for Supermom.

Never mind that I was already bleary-eyed from attending college classes and working full time.

I married and had another child, a son. I had a full-time job and was trying to forge a career as a freelance writer on the side. I barely had time to floss, but I was determined to create lasting memories, even without the internet to guilt me into it.

Store-bought costumes weren't "special," so I continued to make costumes at home. Every Halloween, I dyed hard-boiled eggs purple and turned cream cheese orange for school lunches. Long before fancy manicure pens were a thing, I hand-painted black spiders on my daughter's fingernails. One year, word got out and three of her classmates showed up on our doorstep before school to get theirs done before I rushed off to work.

I was escalating Halloween expectations long before Martha Stewart came along.

As years went by, Halloween became less important to my kids (I now had five), but I was still turning lollipops into ghosts, whipping up scarecrows for the front steps and mass-producing caramel apples.

I should have slowed down in 2002, when I started Queen City Ghostwalk, my haunted tour company. But I didn't, believing that a woman who was known for ghosts had to have the scariest yard in the neighborhood.

On my lawn, werewolves terrorized ghostly damsels, and skeletons sat minding their vacant-eyed baby dolls. One year, my circus menagerie prompted people to get out of their cars to take photos. Passersby were thrilled, but I was exhausted.

I was managing a business and leading tours, sometimes two a night. And I was still making costumes (Janet and Michael Jackson — Rhythm Nation and Thriller respectively) for my grandkids. I felt powerless to stop, approaching Halloween rituals like a freight train with a fistful of orange and black glitter.

That February I fell, fracturing my shoulder, which required a long recuperation. In October I caught a cold, followed by laryngitis.

Still, I rallied, and created a creepy display of dead space aliens in our front yard. I bought pumpkins for my teenagers to carve. Two days later, we found the gourds disfigured, eaten by marauding squirrels. I replaced them with the fake variety, and was mystified to discover those had been gnawed as well.

The week before Halloween, a fast moving storm with rain and high winds sent decorations twirling across the landscape like a scene from The Wizard of Oz. My alien tableau was ruined.

My company was screening The Rocky Horror Picture Show at a local theater on Halloween night. I had a few hundred prop bags to assemble, which involved toasting a few hundred pieces of bread beforehand.

After the storm died down, I stood in a light drizzle surveying the damage and gave one of the even-deader-looking-than-before aliens a satisfying kick. There was no way I was rebuilding them. I didn't have time. I threw everything in the trash. It felt oddly liberating.

When Halloween was over, I had a year to reflect on why, despite poor health (and squirrel mayhem), I'd been determined to carry on my Halloween "traditions."

Whose expectations was I trying to measure up to?

I was surprised by the answer: mine.

When you raise children, you always worry about whether you're doing it right. I was still trying to show my 19-year-old self I had what it takes to be a model parent.

I left the yard bare the next October, and let my kids handle my grandchildren's Halloween costumes. They had a blast creating them together.

When I decided to pare down Christmas that year, ordering Chinese food instead of spending hours in the kitchen, nobody cared. They were excited to have me sitting down opening presents and laughing with them, instead of standing over the stove.

They would have been happier all along with less holiday pizzazz.

Now that I'm not creating Area 51 in the front yard, I can give them what they really want. My time.