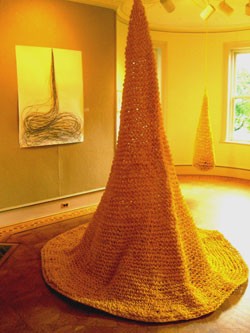 An amazing example of Earth Art blossomed in 2001 along a mile of Route 4 west of Rutland, and the piece was brilliant in both senses of the word. Montpelier artist Alisa Dworsky directed the placement of 1000 blue and green reflectors in geometric patterns beside the highway; they shimmered in the headlights of passing cars after nightfall. The ingenious piece was entitled “Luminous Fields, Longitude in Time.”

A video, documentary photos and 16 preparatory drawings for that installation currently fill a gallery room at the Chaffee Art Center in Rutland. The show is a retrospective selection of prints, sculpture and drawings produced over the last decade. Dworsky’s aesthetic is consistent and effective across media: In her work, cellular passages combine into elaborate matrices, interlocking to create organic abstractions in both two- and three-dimensional space. Nearly 70 drawings and prints are included, as are two monumental crocheted sculptures that dangle from the Chaffee’s 11-foot ceiling.

“All Possible Paths IX” is a 26-by-38-inch graphite-and-pastel-on-paper work, covered with staccato hash marks that accumulate into a conical mass. Three smaller seed-pod forms also appear. Just as the reflectors of “Luminous Fields” were uniformly spaced, so here Dworsky leaves plenty of white space between her drawn strokes. That divisionist drawing technique gives the piece the delicacy of lace. A similar work on paper, “All Possible Paths X,” is populated by long, bulbous masses with narrow waists, like crimped balloons.

In her multiplate aquatint entitled simply “Aquatint III,” Dworsky’s green, blue and magenta lines on black paper have a subtle iridescence. The horizontally oriented 11-by-15-inch print repeats the rhythmic lines found in nearly all of Dworsky’s works. She notes in her artist’s statement, “My drawings and prints are constructed of lines that follow from movement but they also define points in space, hesitation, and mass.” Her irrepressible lines are not unlike musical notes as they move at different tempos through space.

Among the largest works on paper are the charcoals of Dworsky’s “Squall Line: Day For Night” series. Number “VII” is a vertical, 60-by-40-inch piece. The paper was saturated with black charcoal, and Dworsky erased dashes to expose the white surface beneath. The strokes of negative space are broad, scaled in proportion with the larger image. The effect is almost like chisel marks on a large woodcut. Dworsky’s rounded forms are pod-like, with the white spaces creating contrapuntal rhythms. The erasures follow the vertical and horizontal cross contours of the pods.

Dworsky’s sculptures are the most dramatic pieces in the show. They are crocheted with bright-yellow nylon rope, as were the pieces placed around trees on the Fleming Museum lawn last fall. The Chaffee sculptures are precursors to that installation.

“Endless Column with Counterweight” is a 1998 work with a shape akin to a double helix. It’s held vertically aloft by a rope running through pulleys on the ceiling, which leads to a counterweight in a crocheted sling dangling 10 feet away. “Taper with Counterweight,” from 2002, is also suspended this way. The “taper” is a less complex conical form that gracefully rises to a peak, touching the gallery ceiling.

Dworsky has a Master’s in architecture from Yale University. That background may account for the fine lines appearing in most of her works on paper and the airiness of her crocheted works. Yet there is nothing particularly architectonic about Dworsky’s art. Everything is based on natural forms, and straight lines are virtually nonexistent except the taut ropes pulled by counterweights.

In 2001, with a speedometer reading 65, one could pass through the mile-long “Luminous Fields, Longitude in Time” in less than a minute. Illuminated signs at the installation’s east- and westbound entrances warned, “Roadside Art Work Ahead. Caution. No Stopping.” At the Chaffee exhibition, stopping and spending more time with Dworsky’s work isn’t just permitted it’s a pleasure.