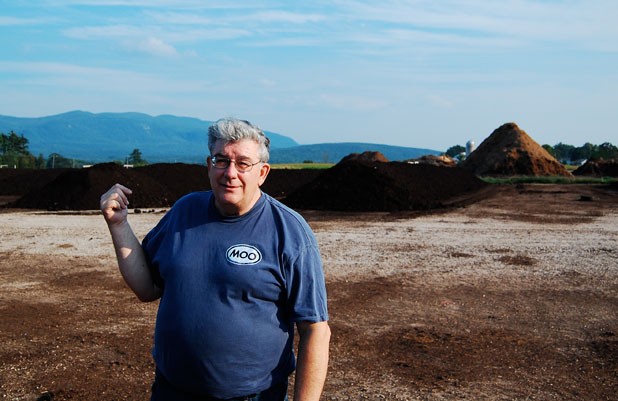 It's been a tough summer for Vermont composters. Two major operations, Intervale Compost Products in Burlington and the Vermont Composting Co. in Montpelier, have been threatened with closure for alleged violations of state law.

Meanwhile, the state's largest composter, Vermont Natural Ag Products in Middlebury, has managed to remain above the regulatory fray. The fact that the company's owner, Robert Foster, is Gov. Jim Douglas' brother-in-law has led to speculation in agricultural and political circles that Vermont Natural Ag enjoys special treatment from the state.

But, even Foster's competitors at Intervale and Vermont Compost say they've seen no evidence nepotism has played a role in the state's enforcement decisions.

"Bob Foster is always careful to meet the criteria of on-farm composting," said Glenn McRae, director of the Intervale Center, the nonprofit that manages the compost operation and the dozen or so farms at the site.

Karl Hammer, president of Vermont Compost Co., said he's worked with Foster on composting issues for 15 years and has "never given much credence" to the rumors that Foster's relationship with Douglas influences regulators.

"I have no knowledge that he's received any favorable treatment," Hammer said.

Last week, Seven Days visited Foster at the Middlebury locale of Foster Brothers Farm, which has been in his family for five generations. The 1500-acre farm, which also includes land in Weybridge, began its dairy operations in 1941, and today has more than 630 cows. The family started up its commercial composting business, Vermont Natural Ag, in 1989.

Foster talked about the family farm during an interview in a converted dairy barn that now serves as the office of Vermont Natural Ag. On hand was his daughter, Heather Foster-Provencher, who handles marketing for the compost company. Both said that, if anything, the family's relationship with the governor places the composting operation under more scrutiny than usual.

"We have to make sure we're 100 percent in compliance on everything," Foster-Provencher said. "They're always looking over our shoulder."

Vermont Natural Ag produces some 45,000 cubic yards of compost per year - five times as much as Intervale. The compost is made from waste from cows, horses, sheep, turkeys and chickens, as well as from food residuals, which Foster defines as "pre-consumer" materials from local restaurants and grocery stores.

Some of the suspicion surrounding Foster stemmed from an Act 250 waiver the state granted Vermont Natural Ag in 2003, when the company added a new building and upgraded its bagging operation. Critics of the state's enforcement actions against Intervale and Vermont Compost point out that the Vermont Agency of Natural Resources ordered those two operations to secure land-use permits, a process that can be costly and time-consuming. It did not require the same of Vermont Natural Ag.

State regulators, however, concluded that Foster's operation didn't need the permit because more than half of the raw materials composted at the site - between 55 and 60 percent - come from the Fosters' dairy farm. That means the business is considered a part of the farm, and is therefore eligible for an Act 250 exemption.

Foster considers his operation not only environmentally benign but proactively green. He's invested more than a million dollars to protect local water resources, and he enjoys good relations with local officials and the community, which, he said, "usually manage to work together."

That kind of good will also distinguishes Vermont Natural Ag from its embattled competitors. The state's enforcement actions at Intervale can be traced to complaints filed by Judy Dow, a member of the Vermont Commission on Native American Affairs. Dow criticized the Burlington composting operation as an environmental and archeological hazard, claiming it sits atop an Abenaki burial ground. The state also accused the facility, which is located in a floodplain, of dumping contaminated wastewater onto community garden plots.

Vermont Compost's troubles with the state started in March, when neighbors complained about potential health hazards associated with Hammer's farm, which abuts three homes on Montpelier's Main Street. In an email to Douglas, one neighbor said neighbors "have seen increased crows" and were worried about "the rat problem" and run-off into the local water supply.

For his part, Foster has been supportive of Intervale and Vermont Compost in their battles with the state. A member of the Composting Association of Vermont's Board of Directors, Foster signed a letter in July that expressed the association's frustration with a Natural Resources Board ruling that Hammer was bringing in too much waste from off-site and therefore needed a permit. The letter urged the Douglas administration to uphold the spirit of H.873, which imposed a freeze on Act 250 enforcement until 2010 to allow for a review of existing composting regulations.

A month later, the board and Vermont Compost reached an agreement that put the board's enforcement order on hold and allowed Hammer to remain in business until July 2010 without an Act 250 permit. Foster is optimistic that Intervale will reach a similar agreement with regulators.

Hammer is similarly hopeful that regulators are now "making an effort to separate the substantive from the hysterical."

"I'm not saying that mistakes weren't made," he said. "But it's been disheartening to see so much exaggeration about our operations. This is work we need to do in Vermont - and do well."