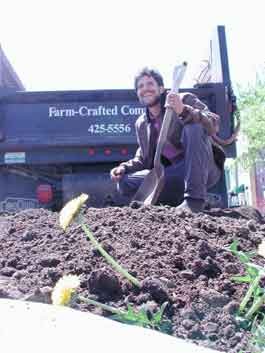 Steve Wisbaum lends truth to the proverb, “One man’s trash is another man’s treasure.” He gushes about a throwaway commodity ultimately responsible for making our gardens grow bigger and better. A wizard of waste, he suggests, “The magic of this process is taking smelly, raw shit, if you will, and transforming it into something people look at and say, ‘Wow!’”

To illustrate his point, the 46-year-old Charlotte resident reaches into an enormous pile of dark, moist, ever-decaying organic matter that’s ready to be used as fertilizer. He holds out a handful of Wisbaum’s Farm-Crafted Compost, as if displaying precious jewels. “Last spring, this looked like that,” he says, gesturing at a nearby heap of cow dung.

These “before” and “after” mounds are located at the University of Vermont’s South Burlington farm, one of two ag operations that provide Wisbaum’s Champlain Valley Compost Company with a steady supply of ordure. The other source is a multigenerational family farm in Bridport.

Like the food chain, it’s a symbiotic relationship. “They provide the land and the raw materials. I provide the composting expertise and the Turner,” says Wisbaum, referring to the large contraption required to treat a prodigious amount of animal excrement mixed with sawdust and straw. “The machine breaks down clumps and fluffs it all up. With it, I can turn about 600 cubic yards an hour.”

Wisbaum has two types of gigs. He does on-site “custom composting” for farms that either use it all or sell the surplus themselves. “I can make compost at a fraction of what it would cost to buy and, if they sell some, that pays for my services,” he says.

Alternately, he sells the surplus himself and gives a percentage back to the originating farm, as is the case at the UVM and Bridport sites. His customers include nurseries, like Garden-side in Shelburne, and dozens of individual cultivators in Chitten-den County.

On a recent sunny afternoon, Wisbaum drops in on the Stone-hedge development on Spear Street, where he has about 15 clients. Two of them greet him enthusiastically.

“I got more out of this plot last year than ever before,” Helga Whitcomb announces. “I still have vegetables in my freezer. In the past, I used manure but that wasn’t as good. I wouldn’t have believed it, but the compost certainly made all the difference.”

Her neighbor, Janice Smith, nods in agreement. “Those who bought the compost in 2001 did really well, so others ordered it this time around,” she says. “This soil is like trying to garden on North Beach — all sand.”

Wisbaum offers a scientific perspective. “It’s missing the organic matter, which acts like a sponge,” he explains. “Sand doesn’t hold water. With compost, plants thrive because they’re not stressed trying to get water and nutrients.”

As Wisbaum climbs back into his dump truck to make another delivery, he continues the biology lesson. The key to great compost is “microbial life,” the miniscule actinomycetes, fungi and bacteria that decompose the manure. “They have been on the planet since the beginning of time,” he says, with an almost messianic light in his blue eyes. “It’s so basic. Microbes are my only employees, really. I feel as if I’m harnessing the power of an awesome number of living organisms. I’m taking care of them and they’re taking care of me.”

Wisbaum stops himself with a laugh. “I have a lot of time to think about this. Maybe too much.”

Time is not actually something Wisbaum can afford to spare right now. Spring means waking up at 6 a.m. and getting to sleep no sooner than midnight. He makes dawn-to-dusk deliveries, followed by hours of business paperwork. Come June, the mighty Turner, which looks like a riding mower for giants, roars into action. Wisbaum will get around to almost 30 area farms throughout the area that take advantage of his custom composting.

A lithe man with a sun-burnished, angular face, Wisbaum spends the better part of every day laboring in an odiferous salt-of-the-earth profession. With middle-class roots — in Niagara Falls, New York — and three older brothers who chose white-collar careers, how did the baby of the family wind up mired in manure?

Via the Middle East. Wis-baum lived on an agricultural kibbutz in Israel for six months in 1974 and, four years later, enrolled at Sonoma State University in California as an environmental studies major. “That’s where I got the compost bug,” he recalls. “At the school’s Ecological Food Production Garden, I saw compost being made, although I didn’t know what it was at first. My parents never even had a vegetable garden. I intended to study solar energy, but was much more attracted to biology than engineering.”

Wisbaum became the garden’s assistant manager. After graduation, he worked as an environmental consultant in the hazardous and solid waste management industry for 12 years. But he always dreamed of returning to compost. In the San Francisco Bay area, he married Suzanne Lourie, a clinical social worker. They wanted to have children and live closer to their families, both based in upstate New York. So, in 1994, the couple moved to Vermont. They now inhabit a house insulated with straw bales at Ten Stones, an “intentional community” in Charlotte.

Wisbaum feels lucky to have landed in a region where manure happens to be plentiful. “Through an alignment of the stars, so to speak, I was offered a part-time job for one year with an on-farm compost demonstration project,” he says. “It was incredibly fortuitous.”

With a loan from a bank’s socially-responsible investment fund, he purchased the $34,000 Turner, as well as a trailer to haul it from place to place and a truck. This equipment allowed Wisbaum to start custom composting for local farms — his original goal. When the scheme did not generate enough cash to make a living, he started selling the surplus to backyard gardeners: 50 cubic yards in 1996; 250 yards in 1997; 500 in 1998. Last year, he offloaded about 2000 cubic yards of the brown stuff from the back of his truck.

Wisbaum’s got the supply-demand thing down. “Every year, I’ve sold exactly what I produce. Only once did I have to turn a customer away,” he remembers. “I hadn’t realized sales would become such a big part of my business, but there’s a very large niche in Chittenden County. A lot of gardeners are looking for high-end, weed-free, manure-based compost.”

Do-it-yourselfers may not know what they are missing. “Compost from vegetables is satisfactory if that’s all you have,” he suggests, “but with animal manure, it’s two to three times higher in nutrients and organic matter.”

Wisbaum’s “have compost, will travel” enterprise is unique. “As far as I know, there are only a handful of people doing what I’m doing in the whole country,” he speculates. “My customers like the idea that they’re supporting local farms and a small business, helping to keep surplus nutrients from leeching into our waterways, and having success in their gardening efforts.”

Working both sides of the pile has put him in an ideal brokering position. “Some organic vegetable farmers in Starksboro had no manure. I suggested they talk to a neighbor who usually has a surplus. I haul it, compost it for them, and they’ll sell their excess,” says Wisbaum, who also mixes and sells his own brand of topsoil.

Since 1997, Wisbaum has had a committed relationship with the Brown Swiss bovines at Shelburne Farms. “He comes here with his Turner,” says Sam Dixon, manager of the 250-head dairy operation. “Steve composts about 1500 cubic yards of manure a year. We primarily use it on the fertility program for our hayfields.”

The cows, of course, eat the hay. Their milk is made into Shelburne Farms cheese, which Wisbaum enthusiastically consumes. What goes around, comes around.

“There’s a significant benefit to composting for us,” Dixon explains. “It reduces the volume of manure. It makes for a more even spreading pattern — less chunks. An element in the compost invigorates the biological activity of the soil, which is then more drought resistant. And the nutrients become much less volatile.”

Wisbaum considers his vocation “an art and a science. It’s not unlike making wine, cheese or yogurt. Those are also the result of a microbial-based process. They all require an understanding of what bacteria need to thrive. ”

Even his kids are getting something out of the process. Wisbaum’s 3-year-old son, Gabriel, often accompanies him on the delivery route. The boy enjoys poking a stick into the compost to encourage those friendly microbes to do their thing. Daughter Isabelle, 7, isn’t quite as fascinated by her father’s occupation. But she and her brother nevertheless do enjoy a storybook that supports dad’s philosophy. Its title? Everyone Poops.