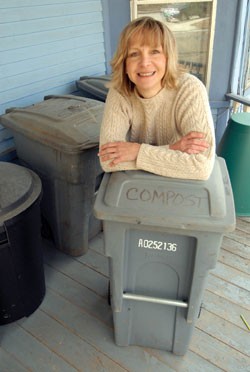 Last summer, 13 garbage experts covered a 20-by-10-foot wall with sticky notes. As members of a state-sponsored subcommittee studying “organics,” they were preparing to tell Vermont’s Agency of Natural Resources what should be done with the state’s compostable waste. They had a lot of material to wade through.

The subcommittee’s recommendations were rolled into a 92-page ANR study, “Life Beyond Garbage,” that will inform the next phase of Vermont’s solid-waste planning process. The study reports that the amount of waste generated by Vermont businesses, residences and institutions increased by 73 percent from 1987 to 2006, and that the average Vermonter generates nearly twice as much waste as he or she did 20 years ago. According to the study, every third pound of Vermont’s “municipal solid waste stream” is compostable.

Among other measures, the study, which was released in early July, calls for an expanded composting infrastructure and a more comprehensive “perishable food network” — both of which seem incompatible with the state’s threat to close Vermont’s two largest compost operators.

Indeed, subcommittee members and other “stakeholders” in the garbage study say closing the Intervale Center and the Vermont Compost Company — which compost more than 20,000 tons of organic waste per year — would make it hard for the state to achieve the composting goals laid out in “Life Beyond Garbage.”

In Burlington, the Intervale Center is negotiating behind closed doors the fate of its 179-acre site with state officials. Despite a moratorium that exempts compost facilities from regulatory enforcement for two years, ANR officials reportedly want the center to pay more than $375,000 just to stay in business.

In Montpelier, the Vermont Compost Company was recently socked with an “administrative order” from the state’s Natural Resources Board. The order requires company president Karl Hammer to cease composting on his 45-acre site and pay $18,000 in fines. The Northeast Organic Farming Association of Vermont has declared the NRB’s actions “gratuitous and aggressive.” Hammer told Seven Days that threatening to shut down his operation “isn’t the best way to achieve life beyond garbage.”

Donna Barlow Casey, who chaired the organics subcommittee and is the executive director of the Central Vermont Solid Waste Management District, said closing the state’s two largest compost operations would be “horrific.” If either the Intervale or Vermont Compost were to close, she said, composters statewide would be discouraged from doing business for fear of prosecution.

Tom Gilbert, a member of the organics subcommittee and vice president Composting Association of Vermont, agreed. “In the immediate future, the impact of what’s happening at both facilities makes everyone more cautious,” he said. “People become hesitant to invest when the future looks uncertain.”

Gilbert is programs director at the Highfields Institute, a Hardwick nonprofit that promotes on-farm composting and soil quality. He said losing either of the state’s largest compost facilities would be a “setback” to the goals of the new ANR garbage study. “Life Beyond Garbage,” after all, predicts that Vermont could divert 100 percent of its organic material from landfills by 2023.

The study has been forwarded to an ANR-appointed Solid Waste Working Group that includes representatives of the legislature, the Vermont League of Cities and Towns, as well as the private and nonprofit sectors. The 16-member working group’s first meeting was originally scheduled for February 15, but was delayed four months while the compost controversy festered. The group met for the first time on June 10.

The group is expected to present a report to the state legislature in January that lawmakers will use to draft Vermont’s next 5-year solid waste management plan. The current one expires in 2011.