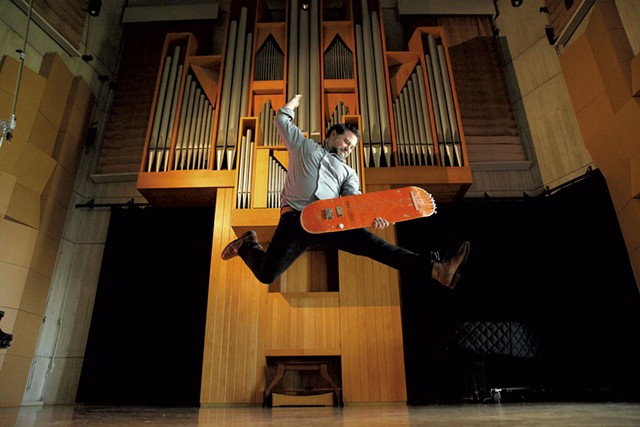 At first glance, composer, violist and guitar player Matt LaRocca could be mistaken for a brewmaster. Maybe it's the scruffy beard, loose plaid shirt and flip-flops, the pant cuffs turned up once for comfort. But brewers aren't typically heard saying things like "A couple years ago, I slapped a pickup on the viola I got when I was 13 or 14 so I could play with friends in bars."

LaRocca, 37, might be considered a brewmaster of a different sort. Since arriving in Vermont three years ago — after completing his doctorate in musical arts at Boston University — he has been stirring up not only Vermont's classical enclave but also the larger cultural scene. LaRocca has collaborated with everyone from TURNmusic to choreographers and skateboarders to the Vermont Symphony Orchestra. Without much fanfare or self-promotion, he's been popping up wherever the arts scene skews wild.

First came the Arctic wilds. LaRocca caught the attention of many Vermonters in January 2016 when the Champlain College Art Gallery hosted his immersive exhibit called "Arctic Voices." Viewers stepped into an enclosed gallery where a slideshow documented a land of ice, water and light on all four walls as a hauntingly beautiful soundtrack played. It began with the sound of wind: brass players blowing without making a pitch. LaRocca had composed the work, commissioned by a Boston-based wind symphony, after participating in a month-long Arctic Circle sailing residency in 2012.

"Arctic Voices" attracted the notice of then-new VSO executive director Ben Cadwallader. "I remember thinking, I want to get inside the brain of the person who cooked this thing up," he says.

After the two met, they embarked on some radically new ventures for the symphony. For a nine-course dinner event called "Sound and Soil" at ArtsRiot, LaRocca chose nine works of music to be played by a string quartet — including a VSO commission he wrote for the occasion. LaRocca then began curating JukeBox, the hugely successful VSO chamber music concert series at ArtsRiot. Jukebox starts its second year in October in expanded form, reaching three additional venues around the state.

LaRocca, who majored in chemistry at Middlebury College, admits he never imagined making a life in music. "I'm still a little surprised that it's working out," he says, sitting at a basement desk in his Burlington home. LaRocca's wife, Heather, is a teacher; their son, Jasper, 4, and daughter, Sawyer, 1, are in daycare.

When LaRocca was growing up in New Jersey, he and his three siblings, urged by their parents, played stringed instruments; he also played guitar in rock bands. His first taste of composing came in elective classes at Middlebury. Soon LaRocca was improvising music for his classmate Heather's dance class.

After graduation—the marriage came later—the two left for Montana "to be ski bums," he says. He was employed in a chemistry lab there but says he hated the work and began to pursue music. LaRocca left to earn a master's degree at Carnegie Mellon University in Pittsburgh, returning to Montana during summers to work as a hotel lounge pianist in Glacier National Park.

He had vacationed in Vermont as a child, so, after earning his doctorate in Boston, he and his family chose to live in Burlington. The music scene took him by surprise.

"What I didn't expect about Vermont was the number of badasses here," he says, citing VSO first cellist John Dunlop ("the guy can play anything"), violinist Mary Rowell, TURNmusic director Anne Decker and the rock band Swale, among others. "The music level is, I think, off the charts," LaRocca enthuses. "These are people who want to move the art forward."

Among that avant-garde is Erika Senft Miller, a site-specific performance artist with a doctorate in dance education. She had been looking for a composer when she saw "Arctic Voices." Miller and LaRocca have since collaborated on two extraordinary happenings. "Between Land and Water," last September, engaged more than 40 dancers, paddleboarders and kayakers in a sunset performance for an audience that stood on the Community Sailing Center breakwater and docks. With his electronica-tinged score for guitars, viola and piano, LaRocca evoked the site's open-air expanse and the movement of water and people.

With "Sleeping Babies / Social Sculptures," a collaboration initiated this summer by visual artist Clark Derbes, Miller choreographed 22 dancers, 22 skateboarders and Derbes doing live-action roller-brush painting in a performance that moved along a stretch of the moribund Champlain Parkway in Burlington. LaRocca and Graham Fisk played instruments that LaRocca had built from old skateboards. Honoring the site's urban vibe, they toted their instruments and amplifiers in a shopping cart between performance spots.

"For many musicians, [site-specific work] is just bringing their music outside," Miller comments, "but, for me, it really means responding to the site. Matt's work was absolutely beautiful."

This Friday, September 8, for the South End Art Hop, a stationary LaRocca and Fisk will reprise their performance at design firm Solidarity of Unbridled Labour in Burlington. Twelve computer monitors will show video footage of the event.

Counterpoint, a professional singing group led by Nat Lew, recently commissioned LaRocca to write a piece for the chorus — with Elizabeth Reid on viola and Paul Orgel on piano — to be premiered next summer. Rowell, who co-founded Craftsbury Chamber Players and formerly played with ETHEL, is currently tackling a LaRocca composition for solo violin that requires her to sing.

"It can all coexist: [Béla] Bartók and Talking Heads, [Ludwig van] Beethoven and modern composers," LaRocca declares. He believes the classical world should offer both concert halls and alternative venues free of "prescribed decorum." Similarly, he adds, there's room for both traditional-length concerts and performances of single movements from larger works, played for an audience enjoying drinks.

LaRocca's experience with both professional and amateur playing has helped make him an effective teacher at all levels. LaRocca just became executive director of Music-COMP, to which young composers can submit their scores online, and he directs the South Burlington Community Chorus and the Champlain Philharmonic. He also taught the unpopular ear-training class at Saint Michael's College, where "Matt achieved a higher level of fun," according to Lew, the music department chair.

This fall, LaRocca switched to the University of Vermont to teach music theory. Patricia Julien, a jazz flutist, composer and professor who heads UVM's composition theory program, recalls being impressed by his guest teaching. LaRocca asked students to sing "Twinkle, Twinkle Little Star" while he played countermelodies and variations on the piano. "It was a way of him not being elitist," Julien notes. "Here was a really well-trained, experienced, professional musician saying, 'Here's how fun [music] is.'"

"He's in love with what he does," says Cadwallader. "I talk about how [musicians and composers] can be deputized as advocates of the art form. Well, love is a great example of that. You can feel it when you're around him."

The original print version of this article was headlined "Crossover Appeal"