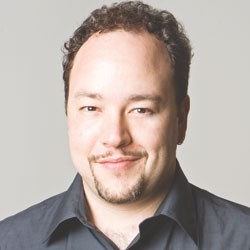 Tweeting may be a silent act, but there’s something about the word itself that’s eminently singable. That’s what composer Rob Paterson and lyricist David Cote were thinking when they referenced the social-networking tool in their new choral work about gossip, commissioned by the Vermont Youth Orchestra Association.

“It’s my favorite part,” says Christa Weaver, a South Burlington High School junior and an alto in the VYO Chorus, which, along with the younger Concert Chorale, will be performing “Did You Hear?” at the groups’ annual spring concert this week.

“[We] sing, ‘I’m gonna Tweet it; I have, like, 52 followers,’” Weaver explains. “It’s very grand and loud, with perfect harmony. Then there are five pages of the word ‘Tweet.’ You can picture all these teenagers texting on their cellphones.”

“There’s a whole section where I have all the sopranos sing like birds,” confirms Paterson. The fast-talking New York City composer is halfway through a three-year Music Alive residency at the VYOA that’s funded by two national organizations, the League of American Orchestras and Meet the Composer.

Though the choir is Tweeting about a rumor that gets out of hand, the rumor itself is never identified; “Did You Hear?” is about how gossip spreads. “By the end, the only concrete reference is a single name,” says Paterson, adding that he’s leaving that blank for the singers to fill in as they see fit. “They joked they were going to use Jeffrey [Buettner], their conductor’s name,” he says.

When asked about the main piece of VYOA gossip these days — former conductor and music director Ronald Braunstein’s lawsuit against the organization for wrongful termination — Paterson says ruefully, “It’s a little ironic that I wrote this piece not knowing that this was going to happen.” Paterson wrote glowing accounts of Braunstein’s work on the VYOA blog last summer. He says he hopes the group weathers the turmoil.

So, how did the VYO chorus end up with a work so pertinent to their lives? It was actually their idea. Paterson met with a dozen or so chorus members last July to ask them what they would want his composition to address. “After a few moments of silence, they started opening up,” he recalls. The issue of being talked about emerged as the kids’ greatest personal concern — so personal, says Paterson, that after rehearsing the piece a few times, “they started imagining it revealed something about them.”

CVU senior Greg Zengilowski of Hinesburg, a VYOC bass, finds “Did You Hear?” refreshingly different from the usual choral fare. “We do a lot of classical stuff and one modernish work [per concert], which tends to be pop,” he says. “Last year, it was ‘Man in the Mirror’ by Michael Jackson.” Paterson’s work, by contrast, is “one of the more abstract and creative pieces I’ve ever seen,” Zengilowski says.

It also has some elements of a staged drama. Cote, whose text is his first for a choral work, is a theater critic at Time Out New York and an “extremely emerging” playwright, as he describes himself. “It’s hard for me to write anything that doesn’t have a dramatic component,” he admits. Cote incorporated a theatrical entrance into the middle: The boy being gossiped about walks onstage singing. (Cote and Paterson are also collaborating on an opera.) And Cote suggested using antiphony — when two parts of the choir alternate singing a phrase — to mimic the spread of gossip.

The project threw him back to his teenage years in New Hampshire. “Just knowing that these were teenagers brought up all these ideas about social dynamics,” he says. “It’s fun to go back to when you’re a teenager, when the social pecking order was so important.

“It still is,” Cote adds with a laugh. “We’re always teenagers, I guess.”