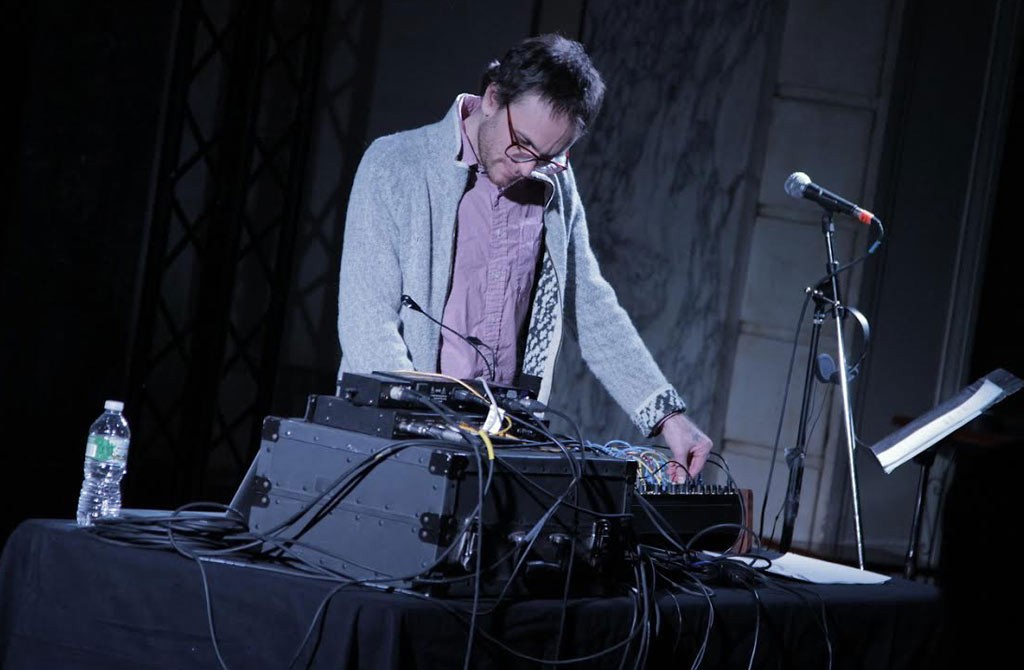 Ben Vida asks a lot of questions. In fact, asking questions — and rarely expecting to find an answer — might be the central tenet of the experimental composer's voluminous body of work.

Brooklyn-based Vida, 41, has been an acclaimed artist in the international experimental music world for two decades. He was a cofounder of Chicago's Town and Country, a minimalist quartet that recorded on Thrill Jockey in the 1990s. He has since worked as a solo artist, releasing records for imprints such as Kranky, Drag City and Shelter Press. He's also an avid collaborator, having worked with a wide array of musical and visual artists, including Burlington's Greg Davis.

Davis is a globally renowned composer who is currently the sonic artist-in-residence at Champlain College. As part of his residency, he's presenting a series of experimental media performances called Signals. Vida will appear at the first show in that series this Friday, September 18, at the Champlain College Gallery in the Center for Communication and Creative Media.


For the show, Vida is performing a work called "Damaged Particulates." The composition is based on the phenomenon of auditory illusion, also called psychoacoustics. In layman's terms, that refers to a curious reaction that occurs when certain tones and frequencies are emitted together — either in tandem or at slight intervals. The resulting resonance triggers a physical reaction within the inner ear that, well, you kind of have to hear, or rather feel, to comprehend.

"The best way to understand them is to hear and experience them," writes Davis of psychoacoustics in a recent email. "At first, they can be confusing, foreign and challenging experiences, but ultimately they can open the doors to a richer and deeper understanding of life and listening. They can also teach us about our perception (and conceptions) of sound and how sounds interact with each other in our environment."

Seven Days recently spoke with Vida by phone about psychoacoustics and his own experimental process.

SEVEN DAYS: What are auditory illusions?

BEN VIDA: There are certain kinds of audio effects that happen through the combination of different pitches, using micro delays and things like that, that create kind of an expanded spatialization. It's something that certain kinds of electronics produce really well. Another word for it is "psychoacoustics."

SD: Would that be similar to overtones?

BV: Exactly. Difference tone, Shepard's tone. There's a thing called an otoacoustic emission, which is a pitch that is produced by your inner ear and comes out through speakers. So a combination of pitches will activate the inner ear and kind of turn into a little speaker of its own in that moment. It produces a very physical tone that emanates from the head. [Laughs]

BV: Yeah. It's an interesting phenomenon. I think when people experience it for the first time, it takes people aback a bit, because it's so physical. But it's not dangerous to the ear. It is kind of an advanced way of receiving sonic material.

BV: It is. But once you get into it, it's very pleasurable.

BV: It's something I discovered when I came into contact with other people who work with these kinds of sonic materials. It's the sort of thing that, once you begin to recognize them, hearing them in other people's music or figuring out ways of producing them yourself, it becomes a really useful form of content. They become a material to work with. So instead of thinking about music in terms of harmony and melody and texture, all of a sudden you're thinking about this phenomenon as compositional material.

SD: So you're using the effect as almost like another instrument in the larger composition?

BV: Yeah. Or as a building block. However you'd like to think of it.

SD: When folks like me try to describe what musicians like you do, it presents a particular challenge. Because I write for a general audience, I can't assume most people will know what I'm talking about, like they might with, say, pop music. So how do you describe what you do to someone who might be wholly unfamiliar?

BV: Gosh, that's a broad question! I think I engage in experimental practices. But the term "experimental music" is kind of a catchall phrase that we all use to talk about music that's maybe dissonant or arrhythmic to signify certain types of composers, who might not even really relate to one another. But, particularly in the last decade or so, I've engaged in the process of actually doing experiments — developing systems and letting them run, coming up with concepts about composition. So the music almost becomes a by-product of the experiments behind it.

One of my intentions with presenting work that uses auditory illusions is that I think audiences are really good at receiving complex auditory information. But I don't think we're always that challenged. So I try to create music that keeps a window open for any kind of listener. I'm not making music to speak to just a community of makers who also make the same music. And it's not that I'm trying to make strange music more popular. I think of it more in terms of how one would think of a gallery.

BV: So much of the music I make these days is actually directed into the art gallery and museum setting and less the concert hall or music venue. One of the reasons for that is that there is a kind of viewer who will go into an art museum or gallery who's not necessarily going in as an expert, but someone who is interested in receiving something that's new to them. So I try to create sonic experiences that reach them the same way. Is that too convoluted?

SD: I don't think so. I think for a lot of people there is an intimidation factor when you go into an "experimental show," like they're not going to understand what's happening. But that's often not the case in a gallery. You sort of expect and welcome the idea that you'll be challenged by the experience.

BV: Everyone brings their own history of listening into the venue. So some people will experience the music through the lens of their own knowledge; others will do so with another kind of knowledge. And it's all valid.

SD: In your experiments, what are some results that have surprised or intrigued you?

BV: In recent years I've been interested in creating compositional frameworks that will invite other people into the process. So that might mean setting up a system where a vocalist comes in and interacts with it, and I take the recording of the vocalist and use it as a compositional element, for example. That was a way of breaking my own subjectivity as a composer and having other people's impressions find a way into my process. So it's not so much about results as it is about creating systems that allow me to engage a set of questions that I don't know the answers to yet, and don't feel like there will be a right or wrong outcome. That's not really answering your question. But I'm trying to engage different kinds of systems that keep collaboration alive in what has become a solo process. I'm finding that I like the idea of decentralizing the compositional process.

Ben Vida performs on Friday, September 18, 8 p.m., at the Champlain College Gallery in the Center for Communication and Creative Media in Burlington. Free.

The original print version of this article was headlined "The Illusionist"