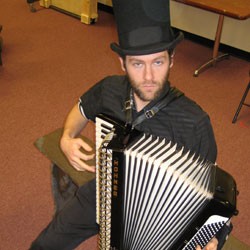 Let there be no doubt: Neil Bartlett’s Oliver Twist is a play with music, not a “musical.” No, Bartlett — an acclaimed British director, playwright and novelist — took precise language from author Charles Dickens for his 2004 adaptation, but the musical element is at the discretion of producers.

That worked out well for Burlington musician David Symons. He was commissioned to write original music for the Vermont Stage Company production of Oliver Twist, which begins next Wednesday. That includes “incidental,” or scene-enhancing, instrumental passages as well as songs. “There are about nine times in the play,” Symons says, “when the cast sings directly to the audience. It’s very Brechtian, very Three Penny Opera-ish — it’s not naturalistic at all.”

That one of Symons’ aesthetic influences is Kurt Weill, who wrote the music for Bertolt Brecht’s edgy “opera,” persuaded VSC artistic director Mark Nash that he was the right choice for Dickens’ classic tale of an orphan in 1837 London. So did Symons’ experience with Burlington’s Spielpalast Cabaret and the stirring, minor-chord tunes of his own Eastern European-inspired previous bands, the Black Sea Quartet and Inner Fire District. He also founded an “activist street band” called Burlington Brass Balagan. Symons simply does “dark” well.

“He’s bringing some of the quality of his music to the show,” says Nash. “David is surpassing my expectations.”

Though he’s written plenty of tunes, as well as accompaniment for the annual Spielpalast performances, this is Symons’ first gig composing choral music. “I immediately made my job harder by writing three-part polyphony,” he says. And setting the “clunky, not very lyrical” 19th-century speech to music is challenging, he observes.

On a recent afternoon, Symons, 32, is holed up in his apartment in Burlington’s Old North End, drinking espresso and demonstrating some of the music he’s created so far — “I’ll probably be writing it up until the play starts,” he confesses. But the stacks of note-filled composition paper speak to his impressive output over the past couple months, and to the complexity of the work. “There’s a ton of incidental music,” Symons explains, strapping on his accordion. “This is from the scene where Oliver is walking to London. He’s starving; his feet are bloody. It’s when he meets the Artful Dodger.”

The melody is delicate, skittery, evoking Oliver’s fear and anticipation. “Imagine my left hand is a violin,” he suggests. (Emma Gonyeau will play that part in the show. Symons will play the cornet.) In this and other scenes, Symons strikes a balance between sweet and dissonant. “There’s a grittiness to [the story], but it’s also a Victorian melodrama,” he says. “So I kind of alternate between sentimentality and harshness. The director [Jason Jacobs] is constantly trying to get me to be more dissonant.”

He switches to a “kind of circus-y music” for a scene in which “Fagin and his little gang of thieves are making breakfast — it’s kind of a physical comedy,” Symons says. Regarding another tune for Fagin, he explains, “Jason wanted it to be klezmer-y; Fagin is always called ‘the Jew’ in the book.”

Symons created some musical leitmotifs to signal themes in the story, such as the “principle of Good” that Oliver represents, or the idea that the boy is trying to find a home. “Several people ‘parent’ him along the way, such as Fagin,” Symons points out.

When he began to compose for the play, Symons says, he listened to “a lot of Kurt Weill” for inspiration, “but I started listening differently.” He then demurs, “[Weill’s] complexity is something I couldn’t approach … I’m basically a folk musician who listens to classical music.”

Audiences are likely to find that modesty unfounded. As the actors, who have gamely learned Symons’ songs, already know, this is Oliver … with a twist.

Oliver Twist, directed by Jason Jacobs, produced by Vermont Stage Company, January 26–February 13 at the FlynnSpace in Burlington. Wednesdays through Saturdays at 7:30 p.m., and Saturdays and Sundays at 2 p.m. $27/32.50. Tickets available here.