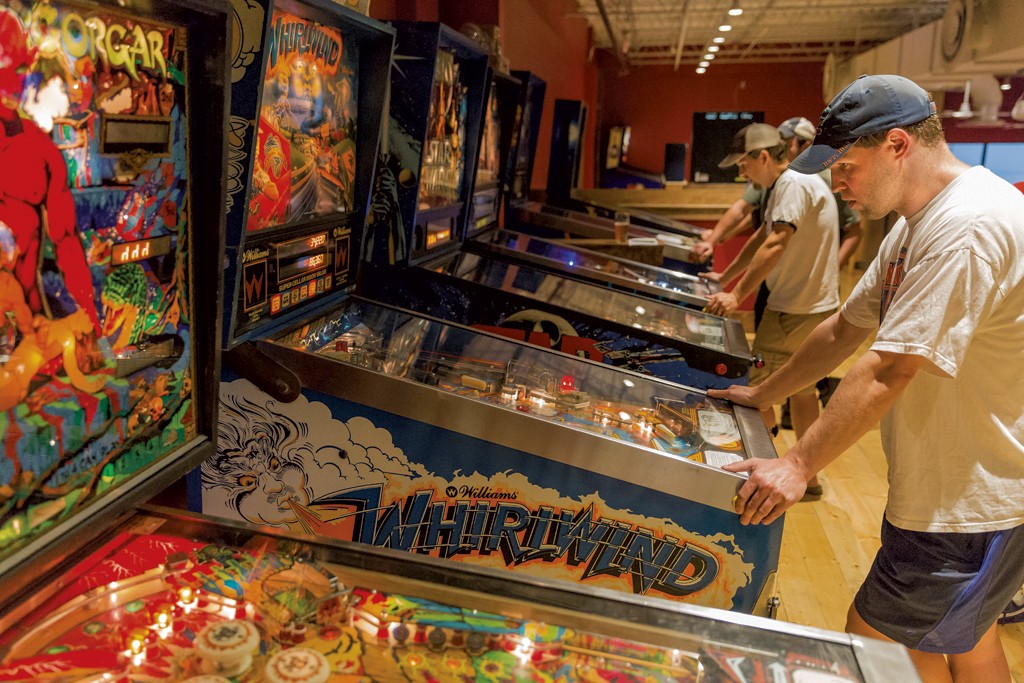 Arm-extension exercises — check. Deep knee bends — check. Game face — oh, it was on. Mat Barewicz leaned in for position and confidently walloped the very first ball down the alley along the right side of the playfield. Within seconds, boisterous music enveloped him and his many onlookers, and hundreds of blinking lights flashed in crazy sequence.

"I think we're all just competing for second place," said one member of Barewicz's bracket to another.

The slugger heard neither this remark nor the barrage of AC/DC songs that blared from the speakers of the band's eponymous pinball machine. His earbuds, blasting the heavy metal that helps him concentrate, were firmly embedded. Besides, he was concentrating much too hard to notice anything other than the complex mechanics of the game.

Barewicz and the three other members of his bracket were competing against one another, and against about a dozen other players, at the inaugural meeting of the Vermont chapter of the New England Pinball League, held last week at South Burlington's 2-month-old Tilt Classic Arcade and Ale House. For many, pinball is a lightly diverting amusement to be enjoyed with friends and beers. Turns out, though, that plenty of skill is involved, at least at the upper echelons of play. The league players at Tilt are more than enthusiasts. They are true pinballers.

That doesn't mean you won't see them with drinks in hand as they wait their turns. (Tilt provides drink holsters at every one of its 12 machines.) For some players, skilled though they may be, the newly formed league is akin to "beer league" softball: a good opportunity to have a few drinks with friends who share a common interest. For others, it's serious sport. The top 'ballers in this league can move on to regional, national and even international pinball competitions. The next stepping stone for local victors: the finals at the Pinball Wizard Arcade in Pelham, N.H.

Barewicz, who traveled from his home in Calais to attend Tilt's league night — and will continue to do so weekly — described his style of play as "aggressive." Among the more serious players to flip a flipper, he'd said, "I play to win" in a phone conversation a few days before the first league night.

Barewicz also noted that he had done well in a few previous tournaments but had "never really placed or won serious money." Last Wednesday, he was aiming right for the tournament — hence the earbuds and intense concentration. "I'm trying to be locked in as much as possible," he explained. His pinball handle, limited by all machines to just three characters, is ZEN.

Other players were less intense, and the overall mood was sociable. Players talked about their favorite games and offered advice to newbies. In fact, patrons who walked in after the snapping of the ceremonial group photo might not have registered that Tilt was hosting a pinball league. Mostly, it looked like a bunch of guys — male league players outnumber female ones 15 to two — just hanging out and playing pinball.

Before the play began, Steve Daniels, the coordinator of NEPL's brand-new Vermont chapter, had circulated in the arcade and replaced several of the thick rubber bands that encircle the machines' flippers. Daniels is the go-to local source for pinball matters logistical and mechanical. He's also a member of the league, and several players speak of his pinball abilities with awe.

Daniels lives just down the road from Tilt in South Burlington, and he has a few pinball machines in his home. He's a genial pinball proselytizer who, like all other NEPL staffers, volunteers his time. He's in it for the love of the game. "[I'm] trying to get people into pinball. That's what I really, ideally, want out of this experience," he said.

A pinball league works more or less like a bowling league. On every game night, players are grouped randomly into fours, and then rotate around the arcade, taking turns at table after table. One, two, three or five points are awarded at the end of every round based on the players' in-game point totals; scorekeeping is strictly on the honor system. Every player's two poorest showings are wiped from the slate before playoffs begin.

Competitive play differs from hang-out-at-the-bar play in one important way. According to the bylaws of the NEPL, "an earned extra ball will be plunged, not played." Translation: Many machines reward skilled play with one or more extra balls after a player's turn is complete — sort of like an extra point in football. In NEPL competitive play, any earned extra balls may be launched into the playfield — "plunged" — but players may not alter their downward course by hitting the flippers. Any coincidental points are awarded to the player, though.

The rules of league play are simple, but pinball itself is far more complicated than it seems. Tables differ so widely in their construction and gameplay that a player who excels at one might fail miserably at another. To earn mega points or a multiball bonus, one machine may require the player to hit a series of distributed targets in a certain order; another may require several successive shots to hit a precise location. Adding to the chaos, each machine flashes lights, blares sound effects and displays important game information on an animated screen.

More elaborate and amusing are the moving parts unique to every table. Magnets are embedded inside several machines for the purpose of altering the ball's course. Whirlwind, a hurricane-themed machine from 1990, features three rapidly whirling discs that lie flush with the playfield; they send every pinball careening off in unpredictable directions. The Lord of the Rings machine has an angry, moving Balrog; players of the South Park machine are occasionally greeted by a mechanical incarnation of the jovial Mr. Hankey.

Fletcher resident Todd Baumeister, a systems analyst at MyWebGrocer, echoed the sentiments of several other players in saying that much of pinball's appeal lies in its incorporation of real-world physical forces. "Once you learn how to beat Mario Bros.," he said, referring to the popular video game, "you can just go through it and play it over and over; it's the same experience every time. But no two pinball games are alike."

Still, modern pinball would be nowhere — and Tilt would likely not have opened — without digital technology. Like other modern pinball enthusiasts, Baumeister credits the internet with the game's recent resurgence. Online, the aspiring 'baller can find diagrams and playing strategies for just about every machine; the Internet Pinball Machine Database is comprehensive, and its users have ranked the AC/DC game as the top game of all time.

Players who really want to step up their games can watch hours of unedited pinball videos. On papa.org, the website of the Professional and Amateur Pinball Association, one can watch archived multicamera videos, complete with sportscaster-esque commentary, from pinball tournaments past.

Digital tech has helped pinballers in an even more important quest: finding the machines. Tilt owner Josh Nickerson said that, to his knowledge, his business has the largest public pinball collection in Vermont. Before the place started attracting players as a magnet does a pinball, local pinballers with a hankering to play resorted to a variety of "pinball mapping" apps and websites.

Barewicz spoke with no great fondness of his days "playing in bars, playing in laundromats, the most random places you could ever find. You'd play on broken machines, on good machines, on terrible machines." Tilt employs a half-time pinball technician to keep its machines fully operational, said Nickerson. (The arcade owner ponied up his $30 league fee like every other player. Those fees generate the prize money for the champions and pay for the end-of-season party.)

A few days after competitors' first matches, the results were posted online. Daniels joked about already needing to drop his first week's score of 10; Baumeister placed second in his bracket with 13 points; and Barewicz, with 18 points, tied two other players for the lead in the first night of league play.

Seven weeks remain in the young pinball season, and spots remain for players who wish to join. Daniels is hoping to capitalize on the league's apparent early success. He aims to hold competitive pinball events at Tilt in October and December, and a state championship tournament in February 2015.

This ball has only just started to roll.