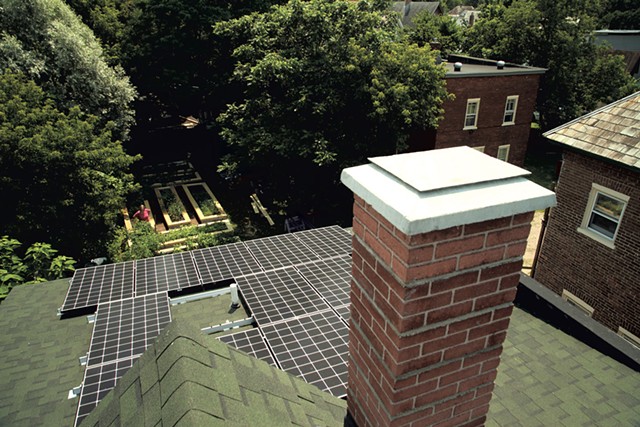 When Dan Goossen decided to install solar panels on his St. Paul Street home in Burlington late last year, he got estimates from three companies. After sorting through the details, he chose Waterbury-based SunCommon, which offered him the most power output per panel.

Jane Dwinell called several companies before she and her husband, Sky Yardley, had solar installed at their Addison home a few years ago. They chose Vermont Solar for its lower price and because they liked working with the owner of a small, local company. When the couple moved to Burlington last year, they called him again.

The growing roster of solar installers in Vermont means customers have many choices. For first-time buyers, picking and choosing a company can be intimidating. Almost every detail — prices, brands of panels and financing options — varies by company.

"It's not insurmountable," said Goossen. But he acknowledged that the lingo takes some getting used to, and cost comparisons aren't always apples to apples, as companies offer different equipment.

The Burlington Electric Department hopes to clear the clutter for its customers. Last month, the utility started offering a Solar Shopper program to help customers compare proposals and prices from multiple installers.

The eagerness of six companies to vie for work in the city is just one sign of both the boom in solar energy and the increasingly keen competition in Vermont.

Advancing technology has driven prices down by 65 percent in the last five years, spurring projects. Residential installations cost about $20,000, but state and federal incentives ease the financial burden.

From 2015 to 2016, the number of solar installers employed in Vermont increased 23 percent, according to the Solar Foundation, which tracks the industry nationally. The trade organization Renewable Energy Vermont lists 32 residential solar installation companies.

"Definitely, competition has increased in the last year or two." Kevin McCollister tweet this

Most of that competition is local. But just this year, two national solar companies, Sunrun of California and Vivint Solar of Utah, announced plans to expand into Vermont, joining California-based SolarCity, which arrived here in 2015.

"We've been watching Vermont a long time," said Vivint Solar spokeswoman Helen Langan, whose company set up shop in the state in June.

So has Sunrun, which expanded to the Green Mountain State in April. "Vermont is one of the most solar-friendly states in the nation," said Ed Steins, Sunrun's East Coast general manager.

Both companies were attracted by Vermont's goal of drawing 90 percent of its energy from renewables by 2020, along with new net-metering rules that took effect in January. The state removed the cap on the number of customers who can earn credit on their electric bills for sending homegrown renewable energy to the grid.

Those rules also set a rate of nearly 19 cents per kilowatt-hour that most residential rooftop solar customers can earn for electricity. "I believe it probably is among the most generous in the country," said Riley Allen, deputy commissioner of the state Department of Public Service.

Some solar installers are going door-to-door, competing for customers to take advantage of those rates. Langan said Vivint will likely come knocking too, focusing initially on BED and Green Mountain Power customers.

Despite all of the competition, Burlington officials sensed that the Queen City was not adding enough solar. The city, which boasts that it is the first in the nation to source 100 percent of its power from renewables, has had just 150 residential solar installations, said Mayor Miro Weinberger. That's up from 25 — in a city of 42,000 residents — when he took office in 2012.

The city's goal is to boost the number of solar arrays by another 100 within the next year. "I think it's what Burlingtonians want," Weinberger said.

But as the state's most densely populated community, Burlington faces solar challenges. There are few open fields or expansive, sunlit yards. Many of the city's older homes have roofs of slate that could crack during solar installation.

The city also has lots of rental properties and landlords who might be less interested in the long-term investment of solar, said Ben Gordesky, renewable energy project manager at DC Energy Innovations, which is taking part in Solar Shopper.

Burlington's permitting requirements make installations more time-consuming, said James Moore, cofounder and copresident of SunCommon, which is also participating. He estimated that the related fees and staff time add $500 to $1,000 to the cost of a residential installation.

City officials are considering ways to streamline regulations, Weinberger said, but the mayor is unwilling to eliminate permits. "We need to ensure public safety," he said, noting that the projects involve electrical connections that could, if installed improperly, spark a fire — especially dangerous in the tight confines of a city.

BED chief operating officer Darren Springer, who had rooftop solar installed on his home in Burlington's New North End four years ago, said he hosted two meetings with solar installers this spring to brainstorm ways to put more panels on city homes. Among the ideas he tossed out was a program used in the state's Upper Valley. There, communities worked together, each hiring a single company to get bulk-rate prices for residents.

"All of us installers, we didn't like that idea," said Vermont Solar owner Kirk Herander, noting that it would exclude some firms.

BED opted instead to try to make it easier for residents to consider solar. The utility set up an online form asking for homeowners' addresses, whether they are interested in rooftop or ground-mounted solar, and what type of roof they have.

Participating installers have two days to respond with a preliminary estimate. BED compiles the data for comparison within one more day. Then, it's up to the homeowner to decide whether to contact the companies.

Companies pay BED $150 annually and a $300 finder's fee for every job they land through Solar Shopper. Those payments cover the cost of managing the program, Springer said. After a year, the utility will evaluate whether to continue, he said.

Goossen said that when he was shopping for solar, BED's program "would have been handy to have" to collect and sort information more easily.

Herander said he expects that Solar Shopper will bring him new customers, but he warned that residents should still carefully study their options. Some solar equipment is more appropriate for a household's particular needs than others, he said.

"Everyone's going to use different [brands of] panels, different labor rates," he said.

Moore, at SunCommon, agreed that customers shouldn't rely solely on BED's comparisons. "They're eliminating the customer interaction, which is actually the main ingredient," he said.

A week after the program launched, 19 customers had sought estimates, Springer said.

Gardesky said DC Energy Innovations responded to 13 of the inquiries.

Vermont Solar offered preliminary estimates for roughly half of the initial inquiries, said Herander. "What we do is use Google Earth, and we can tell if it's practical," he said. "If it's obvious it's a good site, I can give a close quote."

Peck Solar, based in South Burlington, and Building Energy of Williston are also participating. Representatives of those companies did not respond to requests for comment.

Costs influence many customers' decisions. Dwinell said she paid $24,000 for her array. That cost will be partially offset by the $7,000 federal tax credit she will receive. She expects the panels to pay for themselves within 10 years through savings on her electric bill.

Goossen said he's paying $22,000 for his rooftop solar through a 12-year, low-interest loan.

Some installers, including SolarCity and Sunrun, offer customers the option of leasing, versus owning, the equipment.

At Seven Days' request, BED provided a summary of bids for an unidentified city resident. The utility had agreed to keep companies' estimates confidential from each other, spokesman Mike Kanarick said, so the firms' names were redacted.

Five of the six companies provided estimates, and they ranged widely in price — from $17,918 to $39,433. The companies also differed on the suggested number of panels, ranging from 17 to 39. The number of kilowatts the project would produce spanned from 5.8 to 12.5.

The estimated electrical savings in the first year of operation varied from $1,185 to $2,386. All five companies proposed using foreign-made panels with 25-year warranties.

The companies listed on Solar Shopper are all Vermont-based, from small-scale electrical contractors to SunCommon, which has 100 employees and a fleet of distinctly marked vehicles.

None of the national companies applied to be part of BED's program. SolarCity, which was recently acquired by Tesla, did not respond to Seven Days' calls for comment. Representatives of new-to-Vermont Sunrun and Vivint both said they didn't know about the program but would consider participating in the future.

Herander, of Vermont Solar, came to Vermont 26 years ago to work at IBM in Essex Junction. He took the chip manufacturer's first buyout and started installing solar in 1991 for people looking to live off the grid. "I'm the elder, so to speak, of the installers," he said.

Herander said that while competition has mounted since then, so has demand. "There's still a lot of room for everyone," he said.

SunCommon, which opened for business in 2012, is the most prolific installer in the state, with 2,160 projects, according to data from the Energy Action Network, an organization that tracks Vermont renewable energy projects and plots each one on an interactive online map. SolarCity was second, with 1,067.

"I think we are at the very early end of awareness and adoption of solar here in Vermont," Moore said. "There's a majority of the population just now tuning in."

Dwinell tuned in years ago. She and her husband once used solar to live off the grid in Irasburg. At her new Burlington home, she follows her electric generation online and revels in the $245 credit she's accumulated on her BED bill since last fall. But finances aren't what sparked her interest in solar.

"I do it for moral reasons," Dwinell said. "No fossil fuels. They've got to stay in the ground."

Goossen said he'd been considering going solar for years. The November presidential election spurred him to act. "I was feeling pretty discouraged about the future of the world," he said. "I think we have to do everything we can to collectively slow climate change."