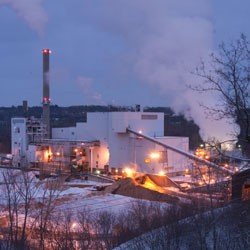 A decades-old plan to heat the city of Burlington with an existing local and renewable energy source is gaining steam — again. On Wednesday, May 11, a community group called the Burlington District Energy System — BURDES for short — is unveiling a just-completed engineering study. It demonstrates the feasibility of recapturing excess heat from the McNeil Generating Station to benefit homes, businesses and government offices in the Old North End and downtown Burlington.

The concept, known as “district heating,” would tap the excess heat currently being generated by Burlington Electric Department’s wood-fired plant in the Intervale and use it to heat water that would be piped throughout the city. If constructed, a district heating system could save Burlington taxpayers millions of dollars in energy costs and dramatically reduce the city’s dependence on fossil fuels.

Jan Schultz is a member of BURDES who served as a BED commissioner in the 1980s. He says McNeil was designed to generate both electricity and steam heat, and its boiler is large enough to meet both needs. Since McNeil opened in 1984, technological advances — largely developed in Sweden and Denmark, where district heat is commonplace — have made comparable hot-water systems more energy efficient and economically viable.

Michael Burns, Ever-Green’s senior vice president of operations, insists that the same system is technologically feasible in the Queen City. He’s offered three steps, or alternatives, for building out the initial infrastructure and expanding it incrementally.

Alternative one would run hot-water pipes under the sidewalks of Pearl Street in order to reach large “anchor tenants,” such as state and federal offices and other large users, with the potential to also connect to private homes and businesses along the way. Alternative two would run pipes to the downtown core and then expand into a broader swath southward. Alternative three would run hot-water lines to Fletcher Allen Health Care, the University of Vermont, and possibly other campuses, buildings and schools along the way.

Burns can’t say yet how many Burlington homes, businesses and offices could be served by such a system, or how much savings could potentially be reaped. He can say, however, that more than 80 percent of the buildings in downtown St. Paul are currently connected to Ever-Green’s district-heating system, which in some years saves “millions and millions of dollars” in fuel costs.

What kind of up-front investment would be required to realize such savings? Neither Burns nor Schultz has offered even a ballpark estimate. Moreover, the viability of such a system would depend on financing, credit and grants, as well as the ability to get buy-in from those anchor tenants. Schultz emphasizes the $140,000 engineering study is a report, not a business plan, funded in part with $70,000 from the state’s Clean Energy Development Fund and a major grant from the Jan and David Blittersdorf Foundation. It’s unclear what entity would build and operate the system.

This isn’t the first proposal to recapture excess heat from McNeil. At least three different feasibility studies have been conducted over the last 20 years, with no measurable results.

In 2003, John Todd of UVM’s Gund Institute offered a similar proposal for the Intervale Food Enterprise Center, a state-of-the-art greenhouse and food-processing facility. The Eco-Park, as it would have been called, planned to reuse and recycle its waste in a virtual closed loop. Steam from McNeil would have been piped underground to heat the 21,000-square-foot greenhouse and food-processing center. Even if a district-heating system were built, Schultz emphasizes, it wouldn’t preclude the eventual development of the Eco-Park.

The greatest obstacle in this scenario would likely be citizen buy-in. In light of the recent Burlington Telecom fiasco, as well as difficulties associated with trying to redevelop the Moran Plant, Schultz says taxpayers would probably be hesitant to pony up for another infrastructure project of this magnitude.

But Schultz, a former engineer who is donating his time to work on this project, makes a good point: Heating in winter isn’t an optional public service, unlike cable television, high-speed Internet service or a lakeside climbing wall.

“Going forward, fossil fuels are going to be enormously expensive and volatile, and we need to look at fuel security for this city,” Schultz says. “There are a hell of a lot of poor and working-class people who are going to have a hard time paying their heating bills, so we need to be looking out 10 to 20 years.”

The Burlington District Energy System’s McNeil Plant study will be the subject of a public meeting at the BCA Center in Burlington on Wednesday, May 11, at 7 p.m. Jan Schultz and Michael Burns will be on hand to answer questions. For more info, contact Mary Sullivan at Burlington Electric Department, 865-7417.