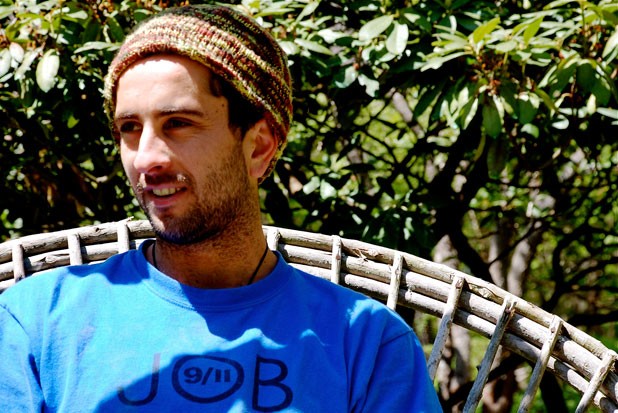 Tommy Alexander wanted to preserve the typos in the slangy title of his new record label, Jenke Records.

“The word ’janky’ is so janky I couldn’t even spell it right,” he says. Regardless of orthography, Alexander, 26, views the ironic name as a blank template, open to interpretation. “It reminds me of community … the family and friends I have.”

A lingering sense of community manifests throughout all things Jenke. Alexander and his cohorts use the term in refrain when discussing their musical endeavors, which have popped up with increasing frequency around Burlington lately. For instance, this Friday, January 27, the label kicks off a new monthly residency at Manhattan Pizza & Pub in Burlington. The following night, Saturday, January 28, at Radio Bean, Jenke celebrates the release of a new compilation, Jenke Records Vol. 1.

“I just noticed there was an amazing amount of local, talented songwriters, and we were all looking for a collaborative support,” he says. The Jenke project launched officially in September 2011, with a party at Radio Bean that Alexander describes as “magical.”

Proceeds from Jenke-sponsored events often benefit local nonprofit organizations or other well-intentioned projects. Past beneficiaries have included the Root Center in Burlington, Tropical Storm Irene relief and a political film by Vermonter Sam Mayfield called Wisconsin Rising. One Thursday each month brings the label to Nectar’s for “Conscious Thursdays,” an event Alexander and Nectar’s manager and Jenke artist Ian Greenman started as a benefit for the Wall Street and Burlington Occupy movements. Greenman considers Alexander “a potential revolutionary.”

“It’s very rare you meet someone who is a lone-star musician but void of the ego that guys like that normally get,” says Greenman.

“My major was not paying attention,” he jokes. “I was only there [to play] baseball.” The erstwhile athlete says he put aside sports for music after buying a Fender acoustic on a whim.

Alexander recorded his own folk-steeped EP, Maybe One Day, the first Jenke release, at a friend’s studio in Boston last year. He notes that he doesn’t record his label’s musicians himself. Instead he considers himself “a middleman” between artists and studios.

Recently, he began leasing office space at the Firefly Collective in Burlington, an intimate studio and gallery on Main Street cofounded by Kimberley Hannaman Taylor and Ren Weiner. From Firefly, Alexander plans to churn out an arsenal of new Jenke records: as many as 12 within the next six months, including Jenke Records Vol. 1. Alexander already offers that trailblazing album streaming on Jenke’s Bandcamp site, where it’s garnered more than 1000 plays. The online prerelease was spurred by his belief that music should be as accessible as possible.

“You do not want anybody who wants the music not to be able to have it,” he declares. CDs of the comp will sell for $5.

A live recording of Erin Kvam’s “Her Eyes Dart Around” reflects Jenke’s community ideal. Kvam’s track comes from one of her “Autonomatic Attic” sessions, informal monthly fundraisers she hosts at her South Willard Street home with boyfriend and Jenke artist Jeremy Hammond. Kvam and Hammond also run the Root Center, a nonprofit dedicated to fostering community and wellness through sustainable agriculture.

Alexander says his diverse cast of musicians came together through “osmosis.” He adds that, rather than looking for artists with a particular sound, he set his focus on the message of the music.

“You have to be genuine,” he says when asked what it takes to become a Jenke musician — though he’s not currently accepting new artists to the already full cast.

“It’s more about a community and a feeling of support,” Alexander continues, once again dropping the C word. He shrugs off comparisons to the Greenwich Village folk movement of the 1960s, insisting that other Jenke musicians are his main inspiration. Alexander cites “2nd Wave” by Tom French as a favorite from the comp. “It’s all instrumental, and it’s just so beautiful,” he says.

His own music has a rootsy bent infused with a tinge of hip-hop, evoking Sublime’s late front man Bradley Nowell.

“Hip-hop was really the first music I became enamored [with],” Alexander explains. “Tupac’s words and emotions especially spoke real truth to me as a young teen.”

Greenman agrees. “You can tell when he’s playing that he means it,” he observes.

The Bean has been an integral part of Jenke’s success. The intimate venue offers a sanctuary for independent musicians to focus on the integrity of their art, an inclusive environment long fostered by Anderson. “I’m there actively promoting the art,” Anderson says. “I think that’s different from some places where owners are more behind the scenes.”

A recent performance at Radio Bean illustrated how the café’s affirming atmosphere has aided Jenke. Alexander invited his friend MC Humble to freestyle over a repeating guitar interlude. A rapt crowd nodded along, hanging on each improvised word coming from the stage. At the song’s conclusion, Alexander thanked the audience for its attention. The appreciation was mutual. “We love you, Tommy!” a fan responded.

Whatever lies ahead for Jenke, the principle of community will be a cornerstone as Alexander establishes his young business as a foundation for musicians committed to social and artistic interests. For now, Alexander plans to launch a new website, jenkerecords.com, where visitors will find music, videos, artist information and a running list of Jenke news, releases and happenings. This summer, Alexander hopes to book Jenke bands at local music festivals including Liberate Music & Yoga Festival, RhinoFest and Manifestivus.

“This year our goal is to get out,” Alexander says, adding that he’d like to expand his community beyond Vermont. “We want to take it on the road.”