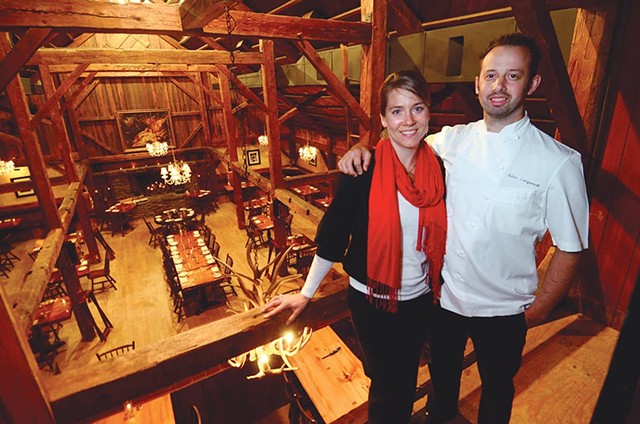 There are some things the chef of a 100-seat restaurant simply can't do. For instance, meander through the woods and harvest enough ramps to put a few on each diner's plate. Or take a midafternoon drive down to a buddy's farm and pick up the pork chops while chewing the fat.

Chef Adam Longworth of Warren's the Common Man was feeling the lack of those moments, suggests his business and life partner, Lorien Wroten. As Seven Days reported in March, the couple decided to close the doors of their Warren restaurant in April. While running the Common Man at full steam, Wroten says, they were missing out on some of their favorite aspects of working with food. "We've always wanted to do something smaller and more creative," she adds.

Now they've reopened the doors to do just that. Though Wroten says she and Longworth may return to a more traditional format this winter, they'll devote the summer and fall to offering a series of intimate, exploratory eight-course dinners for eight to 12 people. (That number may consist of one large party or several smaller ones.)

The first four courses are eaten in the kitchen, which allows Longworth to interact with guests even as he cooks dishes such as agnolotti with chèvre-ramp filling and morels, or roasted suckling pig with polenta. The flower-strewn dining room frames the final courses. Wroten hosts, pours wine and makes cocktails that complement the evening's dishes.

At the kickoff dinner last weekend, Wroten says, the couple attracted open-minded customers who were excited to come in and have the chef prepare whatever he found delicious and seasonally appropriate, rather than the safe options found on more typical restaurant menus. It was just what Longworth and Wroten had hoped for.

Of her partner, says Wroten, "Seeing him fall back in love with cooking ... has been so cool. It's a professional healing sabbatical for us, getting back in touch with what we love about the industry."