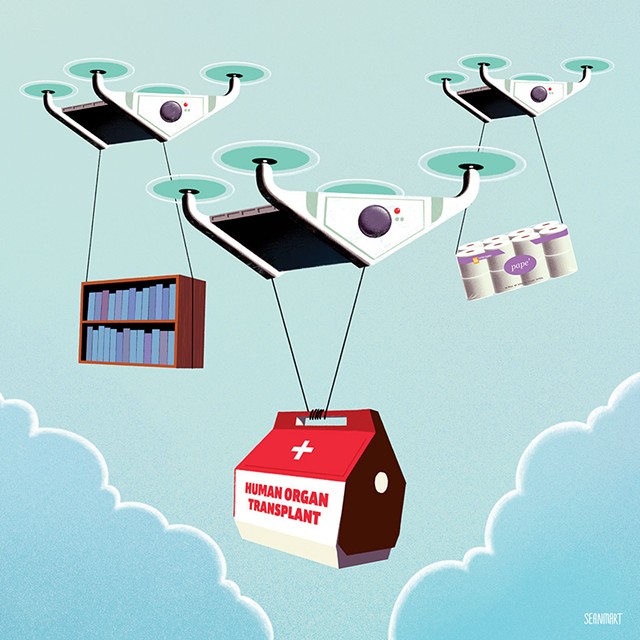 Sometime in the not-too-distant future — think years, not decades — the skies above Vermont will likely hum with swarms of commercial drones completing their appointed rounds. Small, unmanned copters could deliver holiday gifts from Amazon, groceries from Walmart, and medications from CVS Pharmacy and Walgreens. They would be left at people's doorsteps, much the way the U.S. Postal Service, UPS and FedEx deliver today.

Though the above description may sound far-fetched and even dystopian to some, Eddie Duncan suggests that Vermonters get ready for it. Duncan is a noise control engineer and director of acoustics at Resources Systems Group, a Vermont-based research and analytics firm. He said the seemingly sci-fi drone scenario has already become a reality in a small but growing number of communities around the United States, where some of the nation's largest national retailers have launched drone delivery services, or plan to shortly.

According to Duncan, the sooner Vermont lays the groundwork for managing the environmental impacts of commercial drones — notably, noise pollution — the better it will be prepared when the tiny aircraft finally take off in the Green Mountain State.

Three Dartmouth College professors founded RSG in 1986. The firm has since worked in all 50 states and more than 30 foreign countries on a variety of projects, many involving transportation, energy and land-use planning. The employee-owned company, with offices in Burlington and White River Junction, has also made a name for itself in recent years by helping to mitigate noise from wind turbines. As Duncan put it, "We've had our hand in, in one form or another, virtually every wind farm in Vermont."

RSG is one of the few American companies that has studied the community-wide impacts of commercial drones — those used for business, nonprofit or educational use, according to the Federal Aviation Administration. (Drones used by amateur photographers and backyard hobbyists fall in a different category.) In September, RSG released a self-funded white paper: "Three Considerations Around Drone Noise and Strategies for Mitigation." As the paper noted, research by the National Aeronautics and Space Administration has determined that people find the "distinctive and irregular buzzing sound of drones" incredibly irritating.

That pronouncement may seem as groundbreaking as declaring that water is wet. But Duncan explained that, in order to limit drone noise pollution, it's important to first understand the specific acoustical properties that get under people's skin.

Several factors make some sounds more irksome than others, he said. Residents who live in the flight path of Burlington International Airport may find the roar of F-35 fighter jets more aggravating than the buzz of a single-engine propeller plane, but that doesn't necessarily mean louder noises are more annoying than quieter ones. Many people find the rumble of a passing freight train calming, though the sound of someone chewing gum or the buzz of a mosquito can be maddening.

People can find a commercial drone's whine as distracting as a buzzing insect. tweet this

As the white paper notes, "Think of nails on a chalkboard. This noise is not louder than a neighbor's lawnmower, but it produces a much stronger and visceral reaction among listeners."

Indeed, drones generally aren't louder than other transportation sounds, such as vehicles on highways, Duncan explained, but several factors make them more bothersome, including their tonality. Vehicle traffic sounds tend to be more broadband and atonal, he said, akin to white noise. In contrast, a drone's whine is more like the hum of an electrical transformer, and people can find it as distracting as a buzzing insect.

Another reason for drones' sonic irritation, Duncan continued, is that its tones aren't consistent. Commercial drones may have as many as 15 propellers, each of which can spin at different speeds. Duncan likened those sound variations to a slide whistle, making their combined noise less like the buzz of a single bee and more like an entire swarm.

Understanding those and other acoustical properties can help planners figure out how best to mask or mitigate drone noise, including planning routes that affect the fewest number of people on the ground.

Why did RSG undertake months of research on this topic without a client to foot the bill? As Duncan explained, he and white paper coauthors Erica Wygonik and Kenneth Kaliski found the topic an interesting acoustical challenge. Though drone technology has existed for years, he noted, currently there's no regulatory framework governing drone noise the way there is for conventional aircraft.

They also took on the research because COVID-19 has accelerated the adoption of commercial drone technology for consumer use. In October 2019, Wing, a subsidiary of Google's parent company, Alphabet, launched the nation's first drone delivery service in Christiansburg, Va. According to a Walgreens press release, Wing partnered with Walgreens and FedEx to enable Virginia-based pharmacy customers to get drone deliveries of more than 100 over-the-counter medications, wellness products, foods and beverages.

That market took off once the pandemic began. As RSG's white paper noted, "Wing representatives cited a 350 percent monthly increase in signups from February to April 2020 as the pandemic began and stay-at-home orders were issued."

In April, UPS announced a similar partnership with CVS in Florida to deliver prescription meds and other consumer items to the Villages, that state's largest retirement community, home to more than 135,000 residents.

As the pandemic and stay-at-home orders forced people indoors and shuttered many businesses, drone-delivered items such as coffee and toilet paper became among the most sought-after items — and new applications are being identified all the time. In mid-June, Wing began delivering library books to homebound Virginia schoolchildren for their summer reading.

Though Vermont is typically a year or more behind such cutting-edge trends — think of its slower adoption of ride-share services such as Uber and Lyft — new technologies arrive eventually. But Duncan advised that new commercial drone operators will need to avoid many of the pitfalls that have hampered test projects elsewhere.

In October, Duncan presented a more technical version of RSG's white paper at the Quiet Drones 2020 international symposium, originally scheduled to be held in Paris but moved online due to the pandemic. While the symposium included many highly technical presentations on the science of building quieter drones, Duncan said, he was surprised by the dearth of information on community-wide planning for drone noise management.

In Vermont, RSG used existing noise maps of the Burlington area to plot potential flight paths that commercial drones could follow, either to mask their noise or to minimize the number of people who could hear them.

For example, Duncan theorized that commercial drones could be required to follow Vermont's existing roadways before heading off to their final destinations. Other routes could take them over less-populated areas, where they wouldn't pose much of a nuisance to humans. He envisions that some Burlington-based drones heading north and south might be routed over Lake Champlain to minimize their impact on local neighborhoods.

Of course, any such decisions likely will need to consider the impacts on nonhuman ears, too, which Duncan acknowledged could be much more challenging to evaluate.

"For protected species, we might have some values we can use," he said, "but for unprotected species" — cows, sparrows, dogs, bears — "there's just not enough research to know what levels impact certain animals."

Another critical issue to consider, he emphasized, is social equity, especially if Vermont establishes flight paths only through areas that already have high ambient noise levels. Duncan pointed out that lower-income people, through no fault of their own, tend to live in areas with more noise pollution.

"So we want to be careful about strictly flying over those areas," he added, "especially if they're flying to a more advantaged community, where Joe, Becky and Sally are all ordering their coffees at 8 a.m. and having them delivered."

No operator has yet proposed commercial drone deliveries in Vermont, so one might assume that it's too soon for state lawmakers and local municipalities to begin planning their regulation. But given that the commercial drone market is projected to climb to more than $63 billion by 2025, Duncan advises differently.

"If we frame it like that, we don't start thinking about [drones] until there's a developer at the doorstep," he said. "At that point, I think there's a question of whether or not the regulation is being developed for the people or for the developer.

"We know they're coming," he added. "We just can't say exactly when."