Coming and Going: Kingfisher to Open in Ludlow, Free Range to Close in Chester 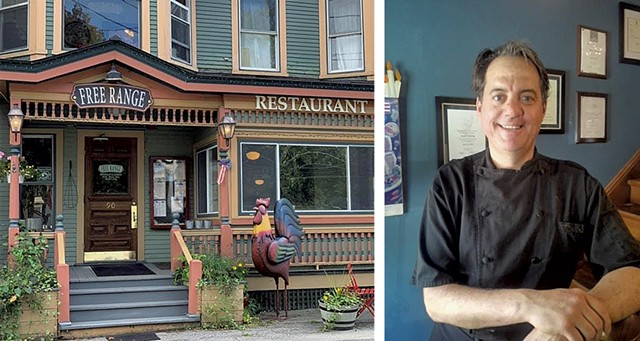 Chef-owner Jason Tostrup will close his restaurant Free Range in Chester at the end of August. A pioneer of farm-to-table cuisine in southern Vermont, Tostrup was chef at the Inn at Weathersfield for more than eight years before moving to Okemo Mountain Resort in 2013.

Tostrup opened Free Range in late 2017 as a managing partner and later became sole owner. He continued to lease the building. "Almost three years in," the chef said, "I was just about to turn the corner."

Various factors led to his decision, Tostrup said, "but the economic realities of COVID contributed to the closing."

When the pandemic hit, he developed a takeout menu. "We stayed open throughout," Tostrup said, "but we were down well over 50 percent."

Tostrup will continue to coordinate the efforts of Chester Helping Hands, which he founded to provide meals to those in need. After serving more than 27,000 meals, the nonprofit is now part of the statewide program Everyone Eats, funded through CARES Act federal relief funding.

Chef Ed Reposa and his wife, Sara Kilguss, plus two recent Rhode Island restaurant industry transplants, plan to open Kingfisher in Ludlow by the end of September. The partnership team, which includes chefs Tim Shulga and Mike Lawyer, has been doing pizza pop-ups at their future location, the former Mama's Hand Made Italian at 190 Main Street.

Reposa and Kilguss moved from Providence to Vermont in 2012 after selling their casual farm-to-table restaurant, Thee Red Fez. The couple has operated a traveling wood-fired pizza truck, La Pizza Lupo, out of Reading since 2016.

Shulga, who grew up in Vermont, cooked at Thee Red Fez. He and Lawyer went on to work at highly regarded Providence restaurants, including North and Oberlin. Lawyer also worked at the renowned Washington State destination restaurant at the Willows Inn.

Kingfisher will offer wood-fired and square Sicilian-style pizzas, both made with naturally fermented dough. The menu will also include dishes featuring local produce, and the team's Ocean State connections will supply seafood.