Each time Teppi Zuppo taught a workshop at the Center for Cartoon Studies in White River Junction, the Vermont cartoonist and CCS grad told students about the Ladybroad Ledger. Zuppo hoped someone might express interest in taking the reins of the comic newspaper for femme- and nonbinary-identifying cartoonists that Zuppo and others had launched in Burlington in early 2017.

Over months of Zuppo's pitching, however, no student expressed much enthusiasm. That is, until 23-year-old Annabel Driussi and her friends got wind of the project.

When Zuppo mentioned relaunching the Ladybroad Ledger to a Zoom workshop on comics in March, Driussi and two of her classmates, Violet Kitchen and Sofia Lesage, began furiously texting each other about taking over the paper.

After a few months of fielding and compiling submissions, Driussi and company will print the fifth issue of the Ladybroad Ledger in August. It will be the paper's first publication since spring 2019.

"They are ridiculously talented, positive and gung ho about everything." Teppi Zuppo tweet this

Zuppo and a group of other Burlington-based cartoonists, including Julianna Brazill, Susan Norton and Iona Fox, launched the Ladybroad Ledger to cultivate the femme-centric comic space that they felt was lacking in Vermont. By 2019, however, many of the group's original members had moved out of the state — and then the pandemic hit.

Driussi, Kitchen and Lesage began accepting submissions for the fifth issue on April 1 through a form on the Ladybroad web page, which they kept open until June 1. They received 30 submissions from a combination of CCS students and cartoonists scattered in other parts of the state.

According to Driussi, this is the first time the paper hasn't been able to accept every submission it received. Twenty of the 30 comics will be included in the 16-page publication, which also has an advertisement section.

Although the editors had to be selective among the submissions, they want to keep Ladybroad accessible to all levels of cartoonists, Driussi said. She and the others made sure to provide each cartoonist with constructive feedback, regardless of whether their comic was accepted.

"Our No. 1 priority is helping people make comics and giving them space to make comics," Driussi added.

Zuppo, who has been mentoring the new organizers, recalled having to bug cartoonist friends to submit work to fill the pages: In those days, about 10 submissions were typical. Zuppo attributed the higher number this time to better publicity on the Ladybroad Ledger social media accounts, which Lesage manages. 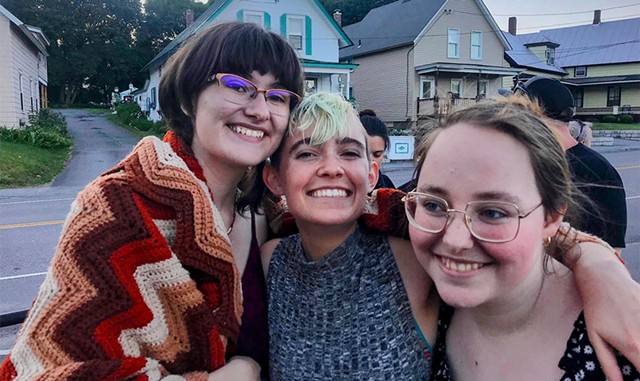 These days, many cartoonists reach a large audience by publishing their work on Instagram or Twitter. A major difference between drawing for the Ladybroad Ledger and social media, Driussi said, is that the paper gives the artist substantially more space for their cartoon. A typical Instagram cartoon is two-by-two inches, while the Ladybroad Ledger accepts submissions as large as 11 by 17 inches — the size of a tabloid-format newspaper.

This creates a fun creative challenge for the cartoonists, Zuppo said: "Being able to fill an entire page gives the creators a ton of room to play and come up with things you wouldn't normally see in a teeny tiny comic book."

The name the Ladybroad Ledger is both a play on the word "broadsheet" (in the U.S., the traditional size of a daily newspaper) and a reference to the identities of the cartoonists.

Another way the Ladybroad Ledger organizers aim to appeal to cartoonists of all experience levels is by leaving submissions open to any theme. Topics of the cartoons can range from politics to sexuality to pop culture.

Despite the paper's lack of a formal xorganically among submissions when something major is happening in the news, such as Donald Trump's inauguration in early 2017. "You could tell that the comics were similarly themed [and] had the same emotional vibe," Zuppo said.

This spring, the Ladybroad Ledger organizers received a grant from Vermont Humanities, which will cover the costs of printing about 2,000 copies of the paper. Additional funding comes from advertisements for local businesses, which are drawn by the cartoonists who contributed to the issue.

Driussi, Kitchen and Lesage will team up with some of the artists to distribute the paper to coffee shops, bookstores and other public places across the state in August. While they will primarily disseminate copies in the Upper Valley, where all three organizers live, and in the Burlington area, Driussi said she hopes to reach as many towns in the state as possible.

Though the new leadership has shifted the Ladybroad Ledger's home base from Burlington to the Upper Valley, Driussi and her friends still make an effort to hold frequent events in Burlington and Montpelier.

In addition to publishing the periodic print issues, Driussi said, a large part of the Ladybroad Ledger's mission is holding events that cultivate a community for femme and nonbinary cartoonists.

Driussi and her co-organizers have already held a couple of in-person meetups this spring, including a Sip and Sketch at Uncommon Coffee in Essex Junction and a Grill and Chill at the Main Street Museum in White River Junction.

The three are excited to keep organizing cartoonist meetups and putting out print issues of the paper. "We're only just getting started," Driussi said.

Zuppo, too, looks forward to watching Driussi, Kitchen and Lesage carry on the legacy of the Ladybroad Ledger.

"They are such a great group of cartoonists. They are ridiculously talented, positive and gung ho about everything, so they were the perfect folks to take [the Ladybroad Ledger] over," Zuppo said.

Look for the fifth issue of the Ladybroad Ledger in August. Learn more at ladybroadledger.com.

The original print version of this article was headlined "Broad Ambitions"