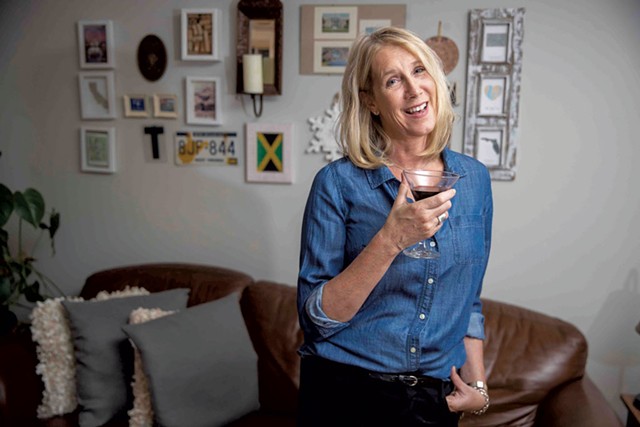 Five years ago, comedian Tracie Spencer found herself at a daunting life crossroads: freshly divorced, unemployed and about to turn 50. So she did what she does best: She joked about it. Over the next several years, the Burlington mother of two reentered not just the workforce but a dating world that, thanks to online apps, had profoundly changed since she was last single decades ago.

Spencer collected those experiences — the good, the bad and the ugly — into a one-woman comedy show called "60 First Dates," which premieres this Saturday, September 14, at the FlynnSpace in Burlington.

Spencer refers to her new hourlong set as a "coming-of-middle-age story." As its title implies, the show centers on the trials of being a newly single woman in her fifties. But, as she has done so often in her comedy since breaking into standup 12 years ago, Spencer digs deep, riffing not only on romantic follies but on family, aging and life.

"Everything is funny, if you can figure out how to make it funny," she says.

Spencer first made her mark in local comedy at the 2006 Higher Ground Comedy Battle, a formerly annual standup competition that helped lay the groundwork for Vermont's comedy boom of recent years. That event connected her with a generation of local standups who would shape the then-nascent scene: folks such as Josh Star, Kathleen Kanz and Josie Leavitt. The last founded the Vermont Comedy Divas, of which Spencer is a member, and will host Spencer's FlynnSpace show.

Kanz, the winner of the 2016 Vermont's Funniest Comedian competition at Vermont Comedy Club, was especially instrumental in Spencer's development as a comic. After meeting her at the Comedy Battle, the Montpelier comedian regularly booked Spencer for showcases and benefit shows; she offered invaluable stage time when opportunities to perform for an audience were infrequent.

"I remember really loving her material and loving her delivery," Kanz recalls.

Spencer considers herself a stronger writer than performer. That strength is evident in her material, which tends to be nuanced and thoughtful and relies on hairpin-curve misdirection. But the key is Spencer's wry delivery, a measured cadence that exudes impish but confident cool.

"She gets into a certain feel, and you can just tell it's going to be funny," Kanz says. "A little smile comes onto her face, and it's like she's almost laughing to herself before she begins. She's one of my favorites."

"There are so many comedic types out there, but I don't fit into most of those types," Spencer says of her standup style.

Nor does her material fit neatly into a category. Spencer describes "60 First Dates" as a blend of standup and storytelling that, while undoubtedly funny, touches on heavier themes. She'll divulge hilarious dating horror stories, sure — like the one about the time she got in a shouting match about white privilege over drinks with a political conservative.

"Yeah, that was a one and done," Spencer says, chuckling. "There were a lot of one and dones, actually."

But she also lets the audience in on deeper fears and insecurities.

"What the hell do you do when you're 50 and single again?" she says.

It's an unapologetically open and exposed approach not unlike that of Jen Kirkman's or Patton Oswalt's more recent standup specials.

"My standup has always been about my life and kind of self-deprecating," Spencer says. "But I realized that, to do an hour, I didn't want it to just be that. There had to be more to it."

So she began writing more involved narratives to weave in with the cheeky one-liners and riffs. According to Kanz, who has seen most of Spencer's show in various stages of development, that blend of comedy and stories gives the performance uncommon substance and depth.

"Her material is always very personal," Kanz says. "The vulnerability in this performance is right out front. It's very daring."

And yet, Kanz continues, Spencer's material is anything but a downer.

Spencer is quick to note that, lo and behold, she actually enjoys dating these days.

"I love meeting new people; I love hearing their stories. And I've made a couple of really good friends from dating," she says. "If I ever get married again, I'd like to keep dating, because it's really fun."