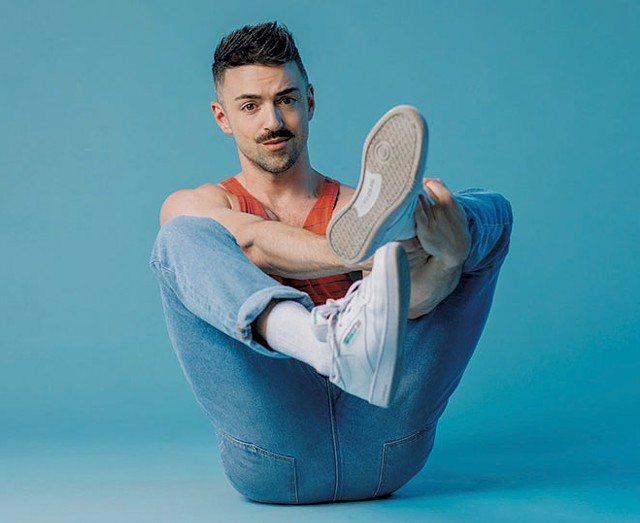 Matteo Lane often starts his sets by flexing his impressive six-octave vocal range. A trained opera singer, the mustachioed, New York City-based comedian usually follows up by making it crystal clear to his audiences that he's gay, should they have any lingering doubt.

A visual artist who's well-known for his thirst-trap Instagram account, Lane frequently skewers celebrities and celebrity culture, vents about dating apps, and tells stories about his huge Italian Mexican American extended family. (He has 34 first cousins, and he sang "Ave Maria" at 12 of their weddings.)

Aside from his busy standup schedule, Lane cohosts the podcast "Inside the Closet" with his comedian friend Emma Willmann. On a 2019 episode of Yahoo!'s streaming talk show "BUILD," Lane and Willmann called the series a refuge of sorts where they could be their true, gay selves without any outside industry pressure. They talk about "what two people talk about when no one else is around — but now we want everyone else to be around," Willmann said. Recent episodes covered everything from huge pop-culture moments such as Will Smith's infamous Oscars slap to reminiscing about the early days of the pandemic.

Lane performs on Friday and Saturday, April 29 and 30, at the Vermont Comedy Club in Burlington.

SEVEN DAYS: We're going to start by playing a little game called "I Googled You."

SD: These are all search terms that autofilled when I was researching you, and you can react, riff or tell me why those terms appeared. "Matteo Lane without mustache."

ML: Yes, I play lots of Call of Duty. And Fortnite. I'm shocked Fortnite isn't before Call of Duty, because I Twitch on Fortnite.

SD: I pulled up a Google search box, typed in Matteo Lane and then typed every letter of the alphabet. A whole list of stuff came up for each letter.

SD: Yeah, that did come up, but just from my own personal searches from ... before. So, you're a Twitcher? Is that what we call a person who uses Twitch?

ML: Your guess is as good as mine. I think "streamer," actually. Which is something I played with when I was little.

ML: Yeah, I used to be on a gay volleyball team in Chicago with my friends. Our name was Ursula's Bitches, and we never won a game.

SD: You have some jokes about "gay voice." At any point in your life, did you feel the need to de-gay your voice?

SD: Gay as the day is long.

ML: Right. So, you know what it was like. It was, like, until yesterday that I would pick up the phone and you would think I was my mother. I don't know. We just have "gay voice."

But, you know, I'm 35. When I was 17 or 20 years old, there was a different landscape. And, of course, I have lots of internalized homophobia and was ashamed of femininity, because that's what I was told. And now I'm 35 and self-realized and happy with my life. And I don't care how gay I sound at all.

SD: You also talk about Grindr a fair amount. What's something about Grindr that non-Grindr users probably wouldn't know or expect?

ML: I don't know. It looks like a Renaissance painting of hell.

SD: I think I know what you mean. Talk a little bit about your opera background.

ML: I'm a trained opera singer who never got to sing opera. In other words, I studied with a voice teacher named Nick Falco in Chicago privately for probably seven years. It's embellishments and breathing exercises and diaphragm exercises and singing little operettas.

A lot of opera isn't just doing an opera; it's the preparation for opera. It's like, football players train more than they play. Because it requires such a huge amount of physical exhaustion and physical work to be able to sing opera that, you know, I basically was, like, preparing myself for war — war being the opera. And then, by the time I was in college, I was like, "Eh, screw it. I'm just going to do art."

SD: What's the hardest thing about getting back into touring after the pandemic shutdown?

I just came back from Vancouver. Everything about Vancouver was great. Getting back and forth from Vancouver felt like I was one of the Wise Men following the North Star in the Middle East to give a shitty present to baby Jesus. I was like, "Why is this so hard? It's 2022."

SD: Was this before or after the airlines dropped the mask mandate?

ML: This was two weeks ago. I haven't been on a plane since the dropping of the mask mandate. I'm flying out to Austin, so that'll be my first time. But I'm gonna wear a mask on planes anyway, because it's like, it's kind of a brilliant idea. It's not a political statement so much as, like, I travel so much. I have to use my voice. Why not? I don't want to get a cold.

SD: What's something you could never live without?

ML: Pasta. That's why I love going back to Italy every year. I can't believe an entire country 1) eats pasta every day, 2) knows how to properly eat pasta and 3) makes the best pasta in the world. It's like heaven to me. It's like Disney World.

SD: So you don't usually eat pasta in the U.S.?

ML: I mean, I cook my own pasta. But I eat at two restaurants in New York City. They're from Italy, and they know how to properly make pasta. That's where I would get my pasta. I'm not saying where because I don't want people to go there.

SD: Anything in the works you want people to know about?

ML: Just searching for a husband.

SD: Shit! I missed that earlier. That was one of my Google searches I had written down. "Matteo Lane husband."

ML: Oh, people think I have a husband? That's interesting.

SD: I think people just want to know if you have one.

ML: It's so hard to date. I feel like, the more I progress in my career, the more difficult it gets to date. Like, I'm flirting with a bunch of guys on Instagram, but one's in Brazil, one's in Australia. Like, what am I doing?

SD: You and some other celebrities who've been kicked off of dating apps should start your own.

ML: One, I'm not a celebrity. But there is a quote-unquote celebrity dating app, which you have to get approved to get into. I finally had a friend refer me to get me into it, and now I use it. They show you five people a day. And then those five people — which you can all find on Grindr — are all, like, across the world. It's like, this person's in London; this person's in Amsterdam. I'm not looking for a pen pal. I'm looking for somebody to date in New York City. And then you match with people and then you never talk. Everyone's ego is swelled in this app. They're all influencers. Who gives a shit? They have no talent.

SD: Well, I hope you find someone to date in New York.

This conversation was edited and condensed for clarity and length.