Comedian Hari Kondabolu has a problem: Apu Nahasapeemapetilon, the iconic Indian Kwik-E-Mart proprietor on the long-running Fox animated sitcom "The Simpsons." The 34-year-old Indian American writer and standup star first aired his beef with the show's depiction of Indian people in a 2012 segment on FX's "Totally Biased With W. Kamau Bell."

In the clip, Kondabolu points out that more people of South Asian descent are in the media than ever before ("There's, like, 14 of us now!"), but it wasn't always that way. He stresses that, when he was growing up, over-the-top stereotypes such as Apu compounded the already-low visibility of Indians in the media — not to mention the fact that a white man, actor Hank Azaria, voices the "Simpsons" character.

Kondabolu continues his examination of Apu and how Indian stereotypes ripple throughout the media in a new documentary called The Problem With Apu. He interviews prominent Indian American actors, such as Kal Penn (Harold & Kumar Go to White Castle) and Sakina Jaffrey ("House of Cards"), and attempts to answer the question: Is Apu actually a form of modern-day minstrelsy? The film airs this fall on truTV.

Catch Kondabolu on Thursday, August 31 through Saturday, September 2, at the Vermont Comedy Club in Burlington.

Seven Days caught up with him by phone.

SEVEN DAYS: When you talked about Apu on "Totally Biased" in 2012, was that the first time you'd mentioned him in your material?

HARI KONDABOLU: I'm sure I'd mentioned him to some degree onstage before, but more as a passing reference. Kamau wanted me to write about [Indian American actress Mindy Kaling's show] "The Mindy Project." I went over the history of South Asian representation and, to me, [the bit] felt corny, to be perfectly honest. It felt like it had been done to death.

I told Kamau that, and he said, "No. You and your friends in your community have talked about this to death. The rest of the country has never thought about it." So that was my first time really exploring it, [and it] really did serve as the seed for the documentary.

SD: How did it develop into The Problem With Apu?

HK: I thought about that [clip] a lot because it kept getting passed around. It came out in 2012, and it was 2015 and still being talked about. And so I thought, Why not try to make it into something? As somebody who is part of this movement of brown artists and comedians — I'm part of a pretty rich wave — it feels like I'm kind of an insider. There was this connection to it. It wasn't like I was exploring something from scratch.

For me, it was really important that it be funny. You have to fight funny with funny. If I want to challenge "The Simpsons," which is one of my biggest inspirations as a comedian, it better be funny. I approached it with a sense of [making] sure there's a sound argument — that, at the end of the day, even if you disagree, you still might laugh.

SD: In the trailer, you say, "I love 'The Simpsons' because..." but then Kal Penn cuts you off. How does that statement end?

HK: I talk about it a few times in the documentary. It was, and maybe still is, the smartest show on television. It's able to explore lots of issues, [and] you don't even think that they're educating you while they're doing it. The interplay of family is very accessible, and there's all this depth.

You see the dysfunction of politicians [and] the police force. You see the absurdity of rich people who have no concept of what life is for most people. It was such an exploration of society, and it's something I try to do with my work. It definitely influenced how I write jokes and what I want to talk about.

SD: Have people tried to change your mind about Apu?

HK: Sure. I've heard all the arguments at this point. Wasn't he a good immigrant character? He had his own business. There wasn't anybody else, so wasn't he educating lots of people about brown people? He was much more developed than a lot of other characters and had all sorts of plots about him. They stereotype everybody [on "The Simpsons"] — how come there's no movie about [Scottish] groundskeeper Willie or the [Mexican] bumblebee guy?

Also, why are you trying to destroy comedy? Why does everything have to be politically correct? Of all the things people say, when people just call it political correctness, it annoys me to no end because it's anti-intellectual and anti-critical thinking. That's all you got? Give me an argument.

SD: Is there a fictional TV character that you see as the anti-Apu?

SD: I read that you used to recite sections of the U.S. citizenship application as part of your routine. Do you recall a particularly absurd question?

HK: Oh, God. There are so many. There's one that asked if you were a member of a terrorist organization. I don't know if the honesty system is the best way to do that. I feel like that could be something that someone would lie about. Have you ever been a member of the Nazi party? I mean, certainly [the government] could ask some of these questions in the interview. It certainly is more than a check box. 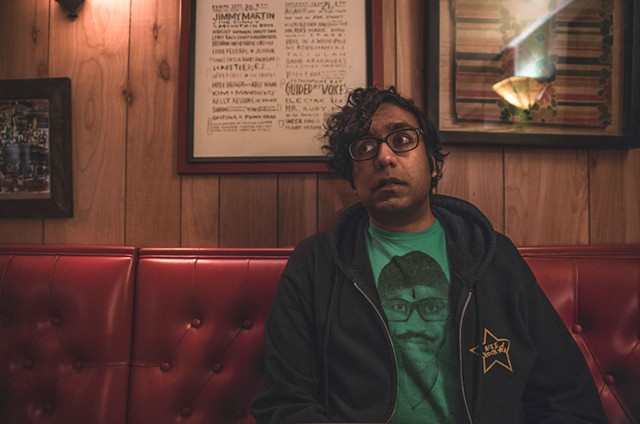 SD: Since your comedy is so rooted in American culture, do you have to tweak your material when you tour internationally?

HK: You realize how American you are once you leave. You think, I can fit in anywhere. And then you get there, and you realize your thinking is so wedded in the history and the context of your country. You don't even realize that there are things about you that are coded in the day-to-day of your country. And when you say those things out loud, people don't understand what you're talking about. It's not as implicit.

You have to explain things a bit more when you're in a different context. It forces me to be more selective and to explain myself. Certain ideas haven't been explored because they're assumed in America. When you have to explain something, you realize how absurd it is and that there's a joke in that.

SD: Most people think of doing standup as fairly terrifying. What's a job that terrifies you?

HK: Anything that requires me to lift things [or] that might [put] someone else's life on the line. Really, most jobs.

The original print version of this article was headlined "Thank You, Come Again"