Comedian David Cross on Net Neutrality, Netflix and His 'Feud' With Miro Weinberger 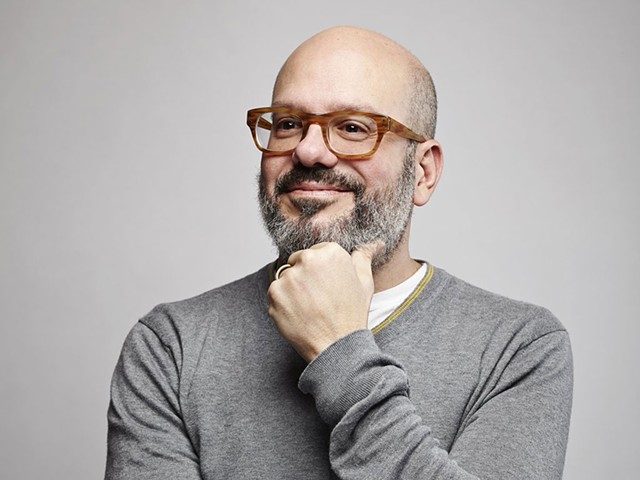 Earlier this year, when David Cross announced that he would be returning to perform in Burlington, he appeared to take a shot at Mayor Miro Weinberger. "Well, Burlington, you asked for it, you got it," he wrote on Facebook. "Despite Miro Weinberger doing his best to keep me out, I'm coming."

The post went viral-ish, at least in Queen City circles, shared many times by bewildered fans puzzled by the actor-comedian's apparent rift with the city's Democratic mayor. Had the outspoken Cross run afoul of city officials when he visited in 2016? Had he made some damning remark about the Burlington Telecom fiasco? Was the mayor, like Cross' character Tobias Fünke on "Arrested Development," secretly a "never nude"? Inquiring minds wanted to know.

Ahead of his performance on Wednesday, June 20, at the Flynn MainStage, Seven Days spoke with Cross on these and other topics, including a past beef with Larry the Cable Guy, the fate of net neutrality, and his new TV series, "Bliss" — a comedy featuring a bigamist who struggles to juggle two families.

SEVEN DAYS: So, what's your beef with Miro Weinberger?

DAVID CROSS: Oh, I did that for every single mayor of every town I'm going to. It was one of those things that I assumed people would understand was a joke. But there have been a surprising number of people who don't know that it's a joke; that a comedian who's coming in made something up about how the mayor is trying to keep him out of the city.

SD: Sorry, are you new to how the internet works?

DC: [Laughs] Yeah. You're right, I should have anticipated it. They all went out at the same time, and I got a lot of comments on Twitter and Facebook: "I can't believe that fill-in-the-blank mayor of Fort Collins is keeping you out! What happened? I like her so much! That's crazy!"

SD: I just assumed you were pissed off about the mall development downtown.

SD: Your last tour was titled "Make America Great Again!" I gotta tell you: It didn't work. What happened?

DC: We need to go back in time. I'll retitle it, and we'll take it from there.

SD: Speaking of going back in time: Several years ago, you took Larry the Cable Guy to task. A lot of the things you said then about the anti-intellectualism of his act seem to resonate with the political climate today. Did you think those comments would be so predictive?

DC: No. That was basically a response to stuff I had read that he had written about me in his book. So I saw it and thought, Well, this is a load of bullshit. And that was that. I never really thought about it again. But who knows with today's kids? I blame the millennials.

SD: Everyone does! You've been very vocal in support of net neutrality. Do you think we'll see net neutrality again any time soon?

DC: I don't know. Part of me thinks that when people understand what the results of the FCC's actions might be, they would get upset and there would be this outrage. But then the other part of me thinks there would be so many people who think, Huh? What's going on? Well, that sucks, I gotta pay more and I can't seem to download anything. Oh, well. I don't know which attitude will persevere.

SD: You've been personally invested in internet technology for a long time. I'm thinking specifically of your 2014 movie Hits, which you distributed through BitTorrent. Why did you go that route, and how did it work out?

DC: I knew it was the kind of movie that would only end up playing in a handful of places for a week. It would be in maybe 10 different cities at the art-house cinema, and then it would be gone. It was just that kind of movie. So, I just wanted to do something different.

I didn't make that movie so that I could make money or win awards. I made it so people could see it. A much more plausible way for people to see it was to distribute it that way. And, at the time, obviously, I didn't know I was going to be able to sell it to Netflix.

SD: Netflix has become a clearinghouse for comedy content. How do you feel about how it's taken hold of the comedy marketplace?

DC: I think any additional venue to access and be able to do standup for is a good thing. The only negative aspect is that it feels like stuff disappears there. If you look for it, you can find it. But, because of the way their algorithm thing works, people who might not necessarily come to my stuff on their own, or don't know to search for it, it's not gonna show up for them. It disappears into the big Netflix void.

But I'm certainly very happy that Netflix exists, and they've been very good to me over the years.

SD: They resurrected "Arrested Development," for one. Speaking of which, Tobias Fünke is a "never nude," among any number of other quirky personality traits. What are some of your quirkiest traits?

DC: Shoplifting. Methadone addiction. I don't know if those are traits...

SD: What can you tell me about the new tour?

DC: I'm trying to follow the same calculus I've done before, where roughly a third is silly jokes anyone can like, another third is anecdotal stories and the last third is political/religious stuff. And it roughly shakes out that way.

SD: Let's talk about "Bliss." What inspired the idea of a bigamy comedy?

DC: I was at home going down the rabbit hole of the internet, and I saw some story about some bigamist somewhere and how he got caught, and I kind of lazily thought, Man, how the fuck do you do that?

And then I stopped and truly thought about it: How do you do that? So I did some research, and there are just hundreds of examples of people who had two families, ranging from a guy who would have a whole different identity to a guy in England who had two families in this small town and they were, like, three-and-a-half miles from each other. And it went on for 12 years. Like, how the fuck do you do that?

So I started thinking about, how would you do that, what would the psychological makeup of that person be, what would it do to you — and your families? I started fleshing out the story, and I realized I had to make the guy likeable on some level — he couldn't just be some awful person. So that was the path that it took.

SD: What surprised you the most about that process?

DC: How difficult it really would be, because just the smallest thing could blow it all up. You have to be on top of your shit at all times. In the story, he's got two kids who are three months apart from each other, and they're both 15 years old and starting to become independent. And he's losing control; it's not easy at all and fucks with the guy completely.

The original print version of this article was headlined "Big Love"