Comedian Beth Stelling on New Podcast 'We Called Your Mom' 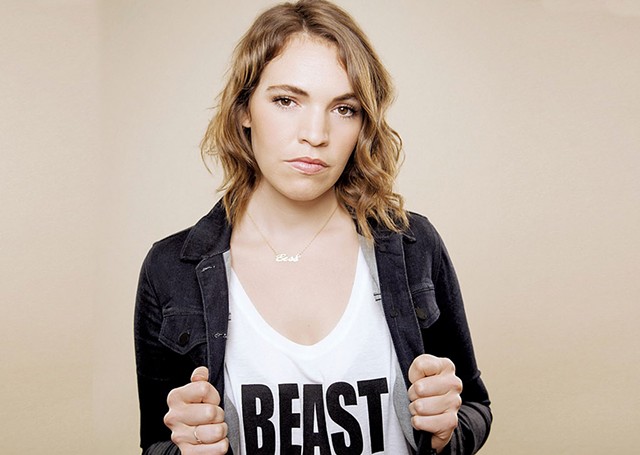 For most kids, few words inspire as much terror as "I'm calling your mother." Whether it comes from a teacher who's miffed that you skipped a math assignment or your friend's parents who've discovered you raided their liquor cabinet, the threat of being ratted out to your parents summons the fear of God. Or at least of Mom, which is basically the same thing.

On her new podcast, "We Called Your Mom," Los Angeles-based comic and writer Beth Stelling approaches the idea of parental perdition from a clever angle: She interviews the mothers of her comedian friends. That's not the only creative twist. Stelling's cohost on the show, which debuted on the podcast network Stitcher in late January, is her own mother, Diane.

The first two episodes of "We Called Your Mom" are delightful, insightful and often hilarious. The premiere episode features comic Maria Bamford's mother, Marilyn, sharing touching stories about her daughter's childhood. On the second installment, the Stellings chat up Lydia Richardson — mother of comedian and "Veep" actor Sam Richardson — who discusses, among other topics, why she includes the number 69 in her email address. When the episode was released last week, her son tweeted, "It's so wonderfully embarrassing!"

Stelling performs Thursday through Saturday, February 14 through 16, at Vermont Comedy Club in Burlington. Seven Days recently emailed the comic to find out what it's like to host a comedy podcast with your mother. And, since she'll be here on Valentine's Day, we asked for her thoughts on the "holiday" and the best piece of romantic advice she ever got from her mom.

SEVEN DAYS: My mom and I had a good relationship, but not a "Hey, let's do a podcast together!" kind of relationship. What made you want to do that?

BETH STELLING: Audiences really love my mom voice and mom material, and so I kinda wanted to share her with the world. She's uniquely funny, fun-loving and open. When it comes to sex, she's a bit of an "ear-muffs" mom who has a wonderfully funny naïveté about her.

SD: When you first pitched your mom on doing a podcast, what was her reaction? Did it take a lot of convincing? And whose idea was it to call other people's moms?

BS: I can't remember if she said yes and then inquired what a podcast was, or vice versa. It's important to give credit where credit is due, but this whole thing was my brainchild. I avoided the podcast world so long, and I knew, in order to enter it, I needed the show to be very different. I also really did not want to bother already very busy friends, comedians and artists.

I really love and find my mom funny, and she is such a huge part of who I am. I was curious to find [out] if that were true for other comedians. Truthfully, my mom was a little disappointed at first — and shockingly late in the game — to realize we wouldn't be talking to any of the actual artists or comedians. I think she really wanted to bend Will Forte's ear.

SD: What's the hardest thing about doing a podcast with her?

BS: Having her in town and creating memories together. I'm so happy I'll always have this. And her enthusiasm and willing[ness] to try something new, to be a little scared and do it anyway.

SD: What did you learn about Maria Bamford from talking to her mom, Marilyn?

BS: That she doesn't read the comments. But, also, it just further solidified how important [Maria] is in the history of standup comedy.

SD: What has been the reaction from comics whose mothers you've interviewed?

BS: There are varying reactions. Most are delighted by the idea. Some want their moms to do it but their moms don't feel comfortable "performing." I assure everyone it's meant to be fun-loving and not an exposé.

SD: Has interviewing other mothers made you look at yours in a different light?

BS: If anything, it's shown me how similar moms of some of my favorite comedians are. Often the comedian is the youngest child, raised by a supportive mother who encourages creativity or has their own wonderful sense of humor about life. And there is usually some element of adversity faced with the support of their mom and, in turn, a loyalty to her.

SD: Who's on your wish list for future episodes, and why?

BS: I've already had some comedians volunteer their moms, like Dulcé Sloan and Ron Funches. Some mothers weren't able to do it in the time frame we were recording. So, if we get another season, Noah Galvin's mom, Abbie, is on the docket. She is a renowned yogi that I know my mom would love to hear from.

SD: If you could interview anyone's mother, past or present, who would it be, and what would you ask her?

BS: Honestly, I'd love a world where we get to do a second call with some of the moms we've already spoken with, because the conversations always ended up with the desire to meet up or speak again. There is so much to be discussed in the life of a mother and their child's upbringing. It sometimes takes a moment for someone to open up, though these moms were wonderful conversationalists and knew they were in good hands, I think.

SD: You're appearing at Vermont Comedy Club on Valentine's Day. Where do you stand on the holiday?

BS: I think it's fine. I don't mind getting flowers or a card or candy or a small stuffed animal. I think those are the only options.

SD: What's the best piece of dating or relationship advice your mom gave you?

BS: Trust your gut. You know the answers; you just have to listen to them.

SD: Do you still remember your first crush? If so, do you know what became of him?

SD: This is at least your second time playing Burlington. Anything you particularly enjoy about the Queen City, or that stands out to you from your last visit?

BS: Third! I went sledding in Bernie's backyard two times ago. This time, I'm hoping to do a Ben & Jerry's [factory] tour.

The original print version of this article was headlined "Tell Mama"