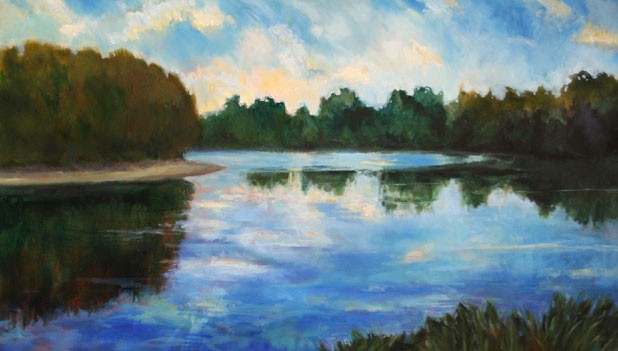 Katharine Montstream’s 27 paintings at the SEABA Center in Burlington fill the space with profuse color. For six months, the city’s Intervale was the artist’s muse as she created this series of oil paintings among its berry farms, vegetable patches and waterways. In an artist’s statement, Montstream writes, “To see the late light reflecting off a distant field, the river bending around the sandy shore or rows of kale emerging from this fertile soil; all this has given me endless inspiration to put on canvas.”

Montstream is well known in Vermont for her saturated watercolor paintings of the Vermont landscape and her views both of and from Burlington. For 22 years, admirers of her work have ventured into her sunny studio and retail space at Union Station to see her latest creations. The presentation of Montstream’s exhibition at SEABA recalls the old notion of art imitating life. Much like the individual farms and plots that make up the Intervale, each work has ample breathing space yet relates warmly to the others in the series.

On a wall near the gallery’s center, “Lettuce Harvest” recalls both the surreal brilliance of a Vermont spring day and 19th-century artist Jean-François Millet’s painting “The Gleaners.” In both compositions, three people bend to their work, but in Montstream’s bucolic version, a field wild with color dwarfs the workers peacefully toiling in the foreground. Alternating rows of celery green and rich red-yellow stretch back into the scene.

Montstream’s works in this show, titled “Into the Intervale,” range from very small ones on board to canvases up to 6 feet wide. She started many of these paintings en plein air to capture the landscape directly. Many of Montstream’s smaller works were also completed on site. Perhaps as a result, those works seem to evoke the landscape with an immediacy sometimes lacking in the larger works. In the small-scale “Emerging Leaves,” for instance, she conjures the richly hued Vermont springtime with nuance and flashes of vivid color. A thickly painted cobalt and aqua-blue sky swirls over a pale, yellow-green stand of trees. A field in the foreground, shadowed red and black, intersects boldly with sunlit patches of red and pea green in the middle ground. The composition is stratified and active. The color and texture of the paint convey the sense of the place, as well as the artist’s feeling and vigor.

In Montstream’s large diptych “Adam’s Berry Farm,” an earth-toned road arcs along the bottom edge of both canvases. It meets a peridot-green lawn jeweled with red-stemmed berry bushes that march in rows into the distance. The shadow of a spindly tree splays over the road and the edge of the lawn, grounding the viewer as it connects the two canvases and articulates the texture of the plush grass and gravelly road. The artist’s attention seems caught by the action of the red bushes and reaching tree. Above this active scene, the sky hangs motionless. It is less vividly observed than the foreground of the piece, slowing the movement of an otherwise dynamic work.

“Into the Intervale” is a study of place, a piece-by-piece unpacking of an extraordinary enclave too easily taken for granted. In Montstream’s capable hands, the Queen City’s network of working farms is a panorama of color and earthy beauty. Curious viewers should be quick to pay a visit to the painted version, as the exhibition closes this Thursday.