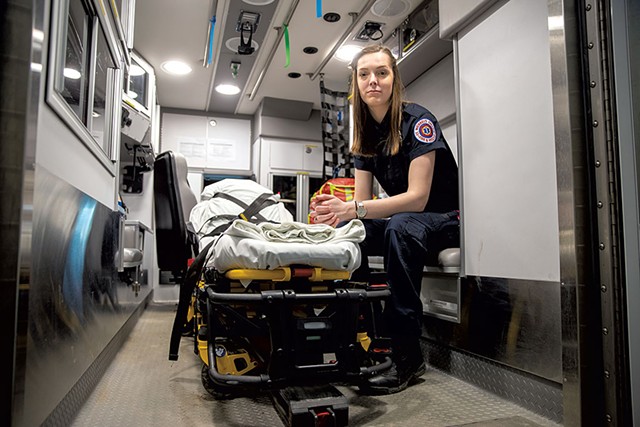 Many students who attend Vermont colleges are headed off to extended spring breaks this week and will resume classes remotely when break ends. But not Gabrielle Stevens. The 21-year-old premed student at Saint Michael's College plans to stick around and continue her volunteer work with St. Mike's Fire and Rescue.

"It's rewarding to be able to transport a patient and say, 'I helped that person out on that worst day of their life,'" Stevens said.

In high school in Maine, Stevens spent so many hours volunteering that she got a varsity letter in community service. Her dad is a neonatal doctor and got Stevens interested in medicine from an early age. Both her mom and her older brother attended St. Mike's and volunteered on Fire and Rescue, so it made sense that Stevens would follow in their footsteps. She's been with the squad two years and is a crew chief who puts in roughly 24 hours a week.

The organization is made up almost entirely of student volunteers.

St. Mike's announced on March 13 that it would move all of its classes online, as the University of Vermont and many other colleges are doing.

"The vibe on campus is, definitely, scrambling, because it was a very last-minute thing," Stevens said.

She said the crew members have been assured they can stay on campus. She and many of her peers will do so, despite the risks that come with responding to medical emergencies during a pandemic. In fact, rescue chief John Keating said, a majority of the student staff has volunteered to keep taking shifts.

They're motivated not just by loyalty to the community, Stevens said, but to each other. The camaraderie gets them through tough times, she said.

"It's the people here," Stevens said. "I think that you share something with them that you don't necessarily share with other people. They understand if you're going through a really hard call ... The people here are the ones that sit you down and get you the help that you need, if you need it."

"It's rewarding to be able to transport a patient and say, 'I helped that person out on that worst day of their life.' "Gabrielle Stevens tweet this

The college has provided ambulance services since 1969, when a student had a heart attack on campus and it took nearly 40 minutes for an ambulance to arrive. The student died. For years, the squad has served parts of Colchester, Winooski, Hinesburg and St. George. St. Mike's responded to 2,500 emergency calls in 2019.

Things have gotten complicated with the emergence of COVID-19. Emergency dispatchers start the screening process for the disease over the phone. Stevens, as the crew chief, assesses each situation and decides what kind of protective gear her crew will wear. In lower-risk scenarios, she might opt for just a medical mask. But if she suspects coronavirus, she'll instruct her crew to don goggles, gowns and masks that offer a higher degree of protection.

"Even if you kind of feel ridiculous wearing your full gowns and everything like that, it's better to be safe than sorry," Stevens said. "The No. 1 rule in EMS is scene safety and crew safety. If we're not safe, then [no one is] safe."

A coronavirus call isn't that different from a flu call. The rescue crew frequently responds to the latter, because for some the disease can be serious. Still, they're planning extra precautions.

Keating is adjusting the work shifts, which traditionally overlapped, so that if someone is infected with coronavirus, it's easier to trace who else might have been exposed. He may reduce the number of responders on rescue calls from four to three to minimize potential exposure. That could make challenging calls, such as cardiac arrests, more difficult.

Stevens and Keating said the rescue crew feels a strong sense of obligation to residents in the surrounding areas.

"At the end of the day, we serve more than just the college community," said Keating. "We can't just tell those towns, 'Nope, sorry, college is closed; we're going home.' We will continue to honor our commitments to them."

The original print version of this article was headlined "These COVID-19 Fighters Wield Information, Medicine and Disinfectant"