When visitors to the St. Johnsbury Athenaeum mount the stairs to the current exhibit in the beautifully restored lecture hall, they are likely to be greeted by an unusual sound, at least in Vermont: the Muslim call to prayer. The live recording, complete with sounds of traffic and the occasional birdcall, emanates from a two-foot-high sculpture set on a platform.

That sculpture, "Collateral Damage," is one of six on view by the Connecticut-based Syrian American artist and architect Mohamad Hafez. The work is a scale model of a section of a bombed-out city. A high-rise with its façade sheared off teeters above crumbling lower structures strung with charred laundry. Crazed electrical wiring pokes from destroyed walls. The lights are still on, however, in one high-rise room, suggesting that everyday life persists among the remnants. "Free Syria" is scrawled in miniature graffiti on a wall fragment; Arabic graffiti decorates others.

Hafez made the realistic work from found materials, including rusty nails, an old spice grater and dead batteries; for the walls, he used rigid foam pocked and painted to resemble strafing and cratering. He made the recording during a trip to Damascus in 2011, shortly before the Syrian uprising began. According to Hafez's label for the piece, the sounds of peace emanating from this war-devastated scene suggest the defiance and strength of the Syrian people.

"Collateral Damage" and two other sculptures, "Internal Conflict" and "A Refugee Nation," indicate that the exhibit aims to raise awareness of the ongoing Syrian war and resulting humanitarian disaster. So does a sculpture made from a deflated lifeboat, on the first floor at the foot of the stairs. Indeed, to reach the sculptures, viewers must walk around an enormous printed-out aerial view of the Zaatari Syrian refugee camp in Turkey, complete with appalling statistics, spread out on the floor.

But Hafez's art isn't wedded to a single theme: The artist's other three sculptures — "Unsettled Nostalgia," "His Majesty's Throne" and "Reflections" — don't specifically reference either the war or Syria.

Hafez was born in Damascus in 1984, moved to Saudi Arabia after one year and returned to Syria at age 15. At 17, he applied for a student visa to study architecture in the U.S., but 9/11 had just happened. The initial background check alone took a year and a half, Hafez said during a phone call from his architectural office at Pickard Chilton in New Haven, Conn. 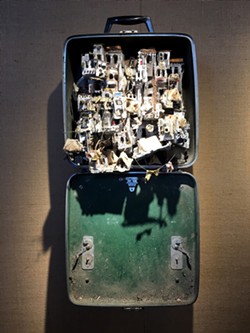 Once settled into a five-year program at Iowa State University, Hafez found himself unable to obtain a visa to visit home. He began re-creating remembered neighborhoods out of homesickness, using the materials available for making architectural models. Hafez had his first show at Iowa State in 2008. He graduated in 2009 and was finally able to return home in 2011, when his firm sent him to Lebanon to present a project. The trip required returning through Damascus to have his visa restamped.

The origin of Hafez's intricately detailed sculptures may explain his work's odd combination of dire subject matter with an evident delight in miniaturization. Miniature worlds evoke childhood almost by definition — as anyone knows who once made tiny flower arrangements for a dollhouse or has followed Alice as she alternately shrinks and grows in Alice's Adventures in Wonderland.

"Unsettled Nostalgia" evokes this sense of pure delight. Wall-hung, the horizontal relief depicts an imagined pre-war neighborhood bustling with life, despite its lack of human figurines. Dollhouse-size café tables and chairs, tiny Persian rugs, even a 1950s-era record player dot the balconies. Apartments equipped with acorn-cap satellite dishes crowd against a soaring arch; on a minaret, blue golf tees stand in for speakers. The eye wanders around the complex neighborhood as if on a pleasant stroll. Only adult viewers are likely to be "unsettled" by this work — knowing that, in certain war-torn Muslim countries, such a scene no longer exists.

When works depicting destruction evidence the same care for detail, their impact is all the greater. "A Refugee Nation" is a crowded assemblage of tiny, makeshift tents, hanging laundry and dilapidated structures that fills an old typewriter case hanging open on the wall. Hafez's label notes that, in this work, he has chosen to illuminate "a crisis so grim that many chose [sic] not to acknowledge, and can no longer bear witness to, its daily atrocities."

The 32-year-old artist says his work is primarily a refuge, something he does first for himself. "It's meditating to jump into that scale. It's my outlet," he says. "There's so much charged emotion going into the work."

Back when Hafez was still waiting for his student visa, the U.S. ambassador to Syria was Robert Ford. A few years ago, Hafez attended Ford's lecture on Syria at Yale University and introduced himself afterward. Ford has since retired to St. Johnsbury with his wife, Alison Barkley, a fellow Middle East diplomat. The couple helped bring Hafez, who has had solo shows at Yale and in Kuwait City this year, to the Athenaeum.

C.J. Collins, a librarian at the Athenaeum and the translator of Osama Alomar, a Chicago-based Syrian writer, planned a speaker series about the Middle East around Hafez's show. Upcoming events include talks by Ford and by Hafez, who will speak about family refugee situations in relation to his work on Friday, September 16. The talk is timely, given the recent backlash in the Rutland area against a plan to resettle 100 Syrian refugees there.

While much of Hafez's work is earnest, he has a humorous streak, too. In the latter category is "His Majesty's Throne," a fantastically built-up work — and the most recent on display — that steals the show.

The "throne" in question is a miniature toilet placed in a spacious white-and-gold bathroom that emerges like an open-sided one-room castle from a warren of small, ordinary, gable-roofed cottages. Above the toilet, on the back wall of the bathroom, hangs a gilt-framed photo of a seated Middle Eastern dictator in suit, tie and medals. From the floor projecting beneath the toilet, sewer pipes coil out to different parts of the crowded neighborhood. The comparatively spare label commentary reads merely, "When societies allow their leaders to perform some verbal diarrhea..."

But wait, doesn't that ruler presiding over the toilet look uncannily like Donald Trump, with black eyebrows and a mustache painted on? Suddenly the Syrian situation seems closer than ever.

The original print version of this article was headlined "A St. Johnsbury Athenaeum Exhibit Presents the Syrian Crisis in Miniature"