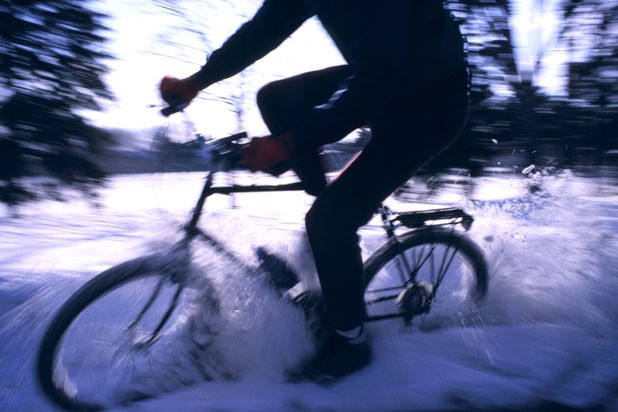 For one thing, “There are fewer thieves around,” Hanks says, noting that her bike was stolen one warm day outside the hospital. “There are fewer creeps, too,” she adds. “Some guy chased me one night. That doesn’t happen when it’s freezing out.”

Hanks finishes her shift at 11:30 p.m. and then pedals along Colchester Avenue to her home. In winter, she rides on the sidewalk to avoid the perils of icy roads narrowed by snowbanks. “The sidewalks are almost always plowed,” Hanks says. “It feels a lot safer than being on the street.”

Charlene Wallace, on the other hand, sticks to Pine Street in the snow and slush when cycling between her South End home and her job at Local Motion on the waterfront. “The sidewalks are dangerous because of all the driveways,” Wallace says. “Cars don’t expect to see you when they’re backing out or pulling in.”

Hanks, however, says she prevents unpleasant encounters by shining her front light directly into the face of a driver exiting or entering a driveway. Plus, Hanks notes, “I give everybody the right of way.”

But why would anyone go to such extremes? What’s the point of biking into Arctic headwinds and through rain, sleet, snow and gloom of night?

Convenience is one reason. “It’s much faster and easier to go by bike than by car in winter,” says Lisa Aultman-Hall, an engineering professor who cycles a mile and a half to and from the University of Vermont nearly every day between December and April. “You’ve got to scrape off your car, and parking and then walking to your office can be a real hassle,” she says. “I love biking right up to the door and then just hopping on my bike when I leave.”

And cycling is certainly quicker than walking. “I just don’t have the patience to go by foot,” Wallace says, adding, “I’ve got to get some exercise to offset all the time I spend sitting at the computer. It’s a healthy and satisfying way to commute. Also, it’s way fun.”

All-weather bike commuters such as Wallace have come to make up a fellowship rather than a freak show. Many more cyclists will take to the streets this winter than have previously, predicts Glenn Eames, owner of the Old Spokes Home bike shop in Burlington’s Old North End. One factor promoting cycling beyond Thanksgiving is that “global warming has changed the seasons a bit,” he observes. “It stays warmer a little longer.”

For Mike Beganyi, a wintertime pleasure cyclist, the rewards take the form of “therapy or meditation.” Biking on snowy trails reveals “a whole different world,” Beganyi says. “It gives me head space that I really need.”

Phil Hammerslough, 68, who rides around Burlington doing errands, says he wants dumbfounded or appalled onlookers to know “we don’t do it because we’re macho or masochistic. We do it because it’s fun and because it’s exciting. There should be some excitement and pleasure in getting from place to place.”

Hammerslough remains a year-round cyclist despite having wiped out “more than a few times” — due on some occasions to his eyesight, which “ranges from poor to miserable.” He hasn’t been seriously injured, however. “I know my limits,” Hammerslough says. “I always ride slowly and cautiously and defensively.”

None of the 10 cold-weather bikers interviewed for this article reports having broken any bones or required any stitches as a result of two-wheeling it in winter. But admittedly, that’s partly due to good luck. Careful riding and quick reactions are certainly called for. “Hit some black ice and — boom! — you’re down. You won’t even know why,” says Eames, a veteran winter rider. It’s happened to him, but he got back on his bike and rode off every time, he recounts.

Beganyi recalls the potential disaster a few years ago when his bike suddenly spun out and he went tumbling into a lane of traffic on North Avenue near Burlington High School. “Luckily, no one was behind me,” he says.

That brush with injury, or death, didn’t deter him from winter cycling, though he did switch from a bike with skinny, studded tires to a Pugsley — a brute of a machine with wheels as thick as a fist. Beganyi, who works at home, pedals the Pugsley on midwinter joyrides through the Intervale and onto the frozen lake near the Boathouse, when skaters are out there, as well. He also goes for 100-mile rides along roads and snowmobile trails.

“‘You’re nuts! What the hell are you doing out here?’ drivers sometimes scream,” Beganyi recounts. “If I ever had the chance to talk to them,” he adds, “I’d ask them the same question.”

While virtually no conditions stop an extreme biker such as Beganyi, many cycling commuters do turn to alternate transport in deep, unplowed snow. “When drivers are all fishtailing, I don’t ride my bike,” Wallace says. Jon Adams-Kollitz, who cycled from the South End to City Hall for three years, adds, “there are times when you can’t feasibly do it, like when the snow is just piling up too quickly.”

Winter’s road hazards prevent Roger Bombardier from riding his bike from late December to March. The snow that buries the already-skinny shoulder along Route 2 makes his nine-mile commute between Richmond and Burlington too dangerous, says Bombardier, 44, who’s studying history at UVM. “When the fear level gets to the point where all my enjoyment is sapped, I drive,” he says.

Some cyclists will likewise leave their rides at home on subzero mornings. Others, however, never let the temperature alone stop them, because, they say, their layers of Lycra ensure they’ll warm up in minutes. “It’s all about the gear,” Aultman-Hall says. “And that’s unfortunate, because the gear is expensive. Winter cycling has economic determinants. As a professor, I can afford to buy fancy pants with reflectors.”

But it’s not about fashion, Local Motion’s Wallace adds. Acknowledging that many more men than women ride in winter, she suggests that may be due in part to females’ greater unwillingness to arrive at work sweaty and snowed upon. “My own style is pretty casual,” Wallace says, “and I don’t mind if I get sweaty.” Aultman-Hall has generally the same attitude, though she admits that cycling can lead to some bad hair days. “Helmet head is definitely an issue,” she confesses.

The quality of the bicycle matters a lot, adds Scott Luria, who commutes on his “very fancy” custom-made, titanium bike all but “maybe five days a winter.” It’s got disc brakes and a frame that allows Luria to switch wheel sizes, from skinny when the road and bike paths are snow-free, to studded mountain bike tires when they’re not.

Strong skills instill high confidence, which is even more of an asset for a cyclist in wintertime, adds Luria, who rides between Williston and Fletcher Allen, where he works as a primary-care physician. “I feel utterly comfortable on a bike in traffic,” he says. “I’ve never had even a close call in 10 years of commuting.”

By riding daily, Luria says he comes across as much more convincing when urging his patients to exercise regularly. He also persuades himself to get on his bike in northern Vermont’s winters “because I see myself as basically lazy, and it’s one way I can feel good psychologically as well as physically.” Cycling even on days that keep downhill skiers off the slopes does amount to “a kind of compulsion,” Luria admits. “I acknowledge that what I’m doing is a bit over the top.”

Winter Biking: What to Wear

Cycling commuters and trail riders differ in the clothing brands they favor, but all agree it’s essential to dress in layers in order to stay dry. “It’s easy to overheat once you get going,” Scott Luria says. “But you can’t afford to sweat because it’ll freeze when you stop for a light, and you’ll get deeply chilled.”

Long underwear feels good on most winter days, many cyclists say. Charlene Wallace tops hers with “rain pants I got at Outdoor Gear Exchange that I really love.”

A neck warmer is crucial, Wallace adds. “It’s much better than a scarf that’ll get all bunched up in back.”

Lisa Aultman-Hall wears a hat with earflaps under her helmet. In deep cold, she pulls on a balaclava — the covering with eye and nostril holes that’s also the favorite facial wear of bank robbers and terrorists.

Glenn Eames suggests getting a pair of safety goggles. Without them, “it can be like biking inside a snow globe,” he says.

Roger Bombardier wants to be sure drivers see him just as well as he sees them. “Wear neon,” he advises.

Lobster mittens will keep a biker’s hands warm almost regardless of how low the mercury goes, Eames says. Luria, however, sticks hand-warmer packets in his gloves “when it’s super cold.” He also wears booties on those days.

Woolen socks inside knobby-grip boots (without toe clips) keep Jon Adams-Kollitz’s feet warm. “Biking-specific winter boots” that can be found at many cycle shops are worth the investment, Mike Beganyi says.

Overall, though, Beganyi’s advice is simple and relatively inexpensive: “Wear lots of wool.” And adapt one sport’s gear to another: “If you cross-country ski, you’ve already got pretty much what you need.”

Winter Biking: What to Ride

Some snow-season riders pedal beaters; others spend $1600 on a Pugsley or even more on a bespoke bike; most rely on mid-market mountain bikes in good condition. And all use studded tires — except Diana Hanks who likes the knobby kind that help cyclocross racers slosh through mud, glide on sand and bump over rocks.

Get a mountain bike made in the mid-1990s with a rigid fork, Eames advises. Models made after that often have suspension, “which won’t do anything for you,” he says.

Whatever the bike, equip it with panniers as well as fenders, Aultman-Hall emphasizes. “You’re going to get wet and dirty on winter roads. It’s nice to have something dry and clean to wear when you get to work.”

Don’t bike in winter without lights on the front and back, along with an emergency backup, Bombardier says. “Use your lights even in the daytime,” Eames adds. “You want to be lit up like a Christmas tree.”

Weekly or more frequent maintenance must be performed, Eames says, because “you’re basically riding through liquid salt on winter roads. And that’s death to your bike.”

The chain and derailleur have to be cleaned and lubed regularly, preferably with a viscous oil that will cling to the parts, Eames says.