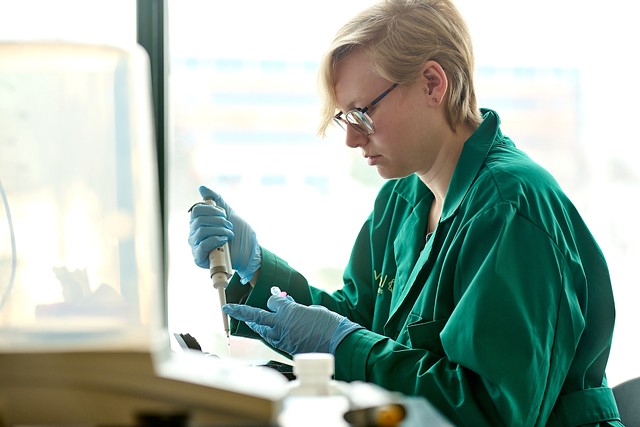 Biotech startup Vernal Biosciences, created two years ago after its founder moved from Boston to Vermont during the pandemic, has received $21 million from investors and is expanding to a new laboratory in Essex next year.

The Colchester-based company, which has 15 full-time employees now, plans to hire 60 people over the next two years, founder Christian Cobaugh said.

Cobaugh, a scientist with a long history in life-sciences manufacturing, said he got the idea for starting his company in Vermont after his family left Boston to spend a month in Stowe in 2020.

Vernal Biosciences makes mRNA, or messenger ribonucleic acid. That’s the genetic blueprint that cells produce to make specific proteins — and it’s an ingredient of the COVID-19 vaccines manufactured by large drug companies such as Pfizer and Moderna. In the last decade, synthetic mRNA has been used to create treatments for some cancers, as well as experimental vaccines against other microbes. Moderna announced last summer it was starting human trials of the first-ever mRNA vaccine against HIV.

Colchester's Vernal Biosciences Manufactures the mRNA That’s Revolutionizing Medicine
By Ken Picard
Tech
Large pharmaceutical companies manufacture mRNA to use themselves, but there’s a lot of potential for smaller companies such as Vernal Biosciences to provide product for small and mid-size biotech drug researchers, Cobaugh said.

“Rather than spending tens of millions of dollars if you have a good idea but it’s still risky, you can outsource the manufacturing of your drug product” to Vernal, he said.

Investment in Vermont startups has soared over the last few years, and it spiked 500 percent in 2021. Most of that was due to large capital infusions at the electric aviation company Beta Technologies and at Williston-based Polly, formerly known as DealerPolicy.

Report: Investment in Vermont Companies Soared Nearly 500 Percent Last Year
By Anne Wallace Allen
News
Cobaugh said he thinks it’s easier to be a biotech entrepreneur in Chittenden County than in Boston. “The willingness to take a risk on first-time entrepreneurs in Vermont is very strong,” he said.

The company got $2 million in early-stage funding last year from an investor in the upper Connecticut River Valley, and he’s received advice and mentoring from entrepreneurs and investors in Chittenden County.

“It feels like people are really rooting for our success," he said.

Despite the housing shortage and the employment crunch in Chittenden County, Cobaugh expects to find the kind of staff he needs as the company grows. He said he has been happy with the new graduates he's been hiring from the University of Vermont and Castleton University. And while there aren’t as many people looking for jobs as there are in Boston, he said, there also aren’t as many jobs available — meaning there’s more chance of your workers staying around.

“It’s impossible for an employee to go to lunch and never come back, which is what is happening down in Cambridge,” he said of the Massachusetts city, a longtime biotech center.