Five years ago, when Christian Cobaugh had the idea of starting a biotech company to manufacture mRNA, the genetic term wasn't in the vernacular of most nonscientists.

COVID-19 changed that and much more for Cobaugh, a 49-year-old pandemic refugee from Massachusetts. Given the groundbreaking success of mRNA-based vaccines in protecting against the virus, he had no trouble convincing investors of his product's value or his company's growth potential. The Colchester-based biotech firm of which he's founder and CEO, Vernal Biosciences, manufactures high-purity mRNA for medical research and therapies.

Messenger ribonucleic acid, or mRNA, is the genetic blueprint that our bodies' cells produce and use to make specific proteins. But mRNA also can be synthesized in a laboratory by rearranging its four nucleotides, or building blocks. Both the Pfizer and Moderna vaccines use mRNA to enable the body's immune system to recognize and defend against spike proteins on the surface of SARS-CoV-2, the virus that causes COVID-19.

Though the technology may be news to COVID-19 vaccine recipients, synthetic mRNA has been around for decades. In the last 10 years, it's been used to create treatments for certain cancers and blood diseases, some of which the U.S. Food & Drug Administration has already approved. Synthetic mRNA has also been used to develop experimental vaccines against other microbes. Last week, Moderna announced that it's starting human trials of the first-ever mRNA vaccine against HIV.

Although mRNA technology has demonstrated its extraordinary potential for preventing disease and extending lives, only about a half dozen firms worldwide specialize in making it in a highly pure form, Cobaugh said. Most of those are in the business of "drug hunting," or developing marketable medicines that will earn them hefty profits.

"So if you're just a random ... biotech or even an academic researcher, and you want somebody to make your mRNA — which is probably a good idea, because it's hard to make — those guys aren't an option," Cobaugh said. "You're going to need double-digit millions to get their attention, and even then you'll have to take a number."

"From a company-investor perspective, mRNA is the gold rush." David Bradbury tweet this

It's difficult to synthesize large volumes of mRNA that are pure, stable and consistent; even a tiny inaccuracy can ruin months of research. Cobaugh's goal is to sell high-purity mRNA to anyone who needs it — from cell and animal researchers to small pharmaceutical firms — without a waiting period of months.

"Everybody who needs mRNA should have a chance to get it," he said. "So that's what Vernal is all about — democratizing access."

Cobaugh met a reporter last month on Water Tower Hill in Colchester, where Vernal Biosciences leases commercial space formerly occupied by the Albany College of Pharmacy and Health Sciences. In November 2020, the college announced that, after years of steadily declining enrollment, it would close its satellite campus in 2021 once all of its Vermont-based students had completed their studies.

Though expensive, the space was a fortuitous find, Cobaugh said. Larger cities such as Boston, New York, Seattle and Philadelphia have what are called "launch labs" — low-cost, low-risk incubator spaces for life-science startups that offer shared resources such as offices, laboratories, freezers, cafeterias and seed capital. Vermont has none. The nearest launch lab is the Dartmouth Regional Technology Center in Lebanon, N.H., home to 20 companies ranging from Pete and Gerry's Organic Eggs to Javelin Oncology.

Fortunately for Cobaugh, the former pharmacy school space was "move-in ready" and outfitted with cold-storage units, laboratories and a clean room previously used as a formulary for teaching students to compound medicines. Vernal Biosciences took occupancy in mid-April and was up and running with its first purchase order by mid-May — three months ahead of schedule.

"That's good and bad," Cobaugh said. "You're not quite ready, but you also have revenue much earlier."

To a visitor touring Vernal Biosciences, it was clear that Cobaugh and his staff of seven have plenty of room to grow — and are still settling into their new digs.

The company had just installed a new $40,000 imaging station. The size of a computer printer, the device separates mRNA molecules according to their size and electrical charge and measures their purity. Another comparably pricey piece of equipment, a purification station, sat on a pallet in bubble wrap awaiting the vendor who would set it up.

Notwithstanding the unopened boxes and yet-to-be-installed lab equipment, Cobaugh is no newcomer to the world of life-sciences manufacturing. The St. Louis native earned his master's degree in molecular pharmacology at Northwestern University in Evanston, Ill., in 1999 and his PhD in cell and molecular biology at the University of Texas at Austin in 2007.

In 2014, while in California for a postdoctoral fellowship, Cobaugh landed a job with Alexion Pharmaceuticals, a global firm that specializes in therapies for rare diseases. He was hired for his expertise in monoclonal antibodies, which, he noted, "are [in] some of the top-selling drugs in the world right now." In addition to their use in treating conditions such as rheumatoid arthritis, lupus and Crohn's disease, monoclonal antibodies are being studied as a prevention aid and treatment for COVID-19.

When Cobaugh came on board, Alexion had just partnered with a brand-new biotech firm called Moderna, and he was the first scientist recruited to work with its mRNA technology. Alexion was interested in mRNA, Cobaugh explained, because many rare diseases are caused by genetic defects involving a dearth or absence of specific proteins. The idea was to give patients mRNA to replace the proteins their bodies don't produce naturally. 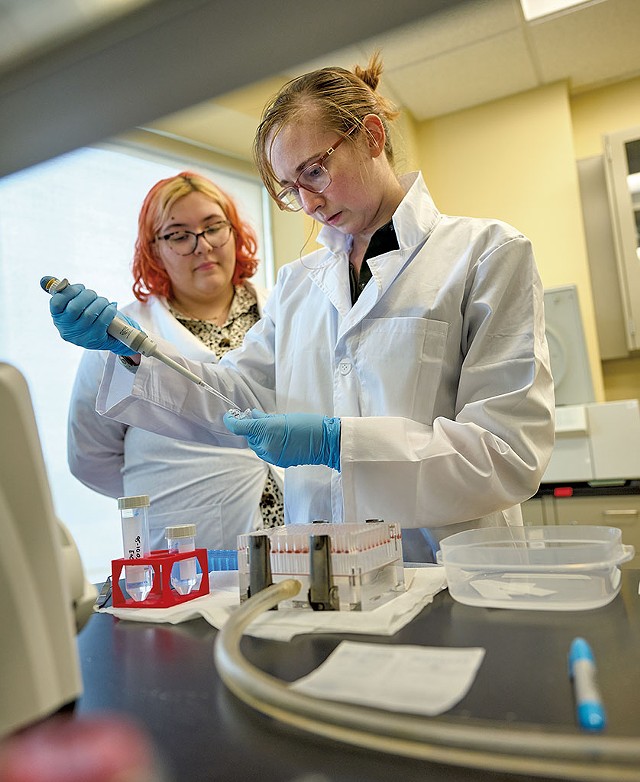 By 2015, the Alexion-Moderna partnership wound down, and Cobaugh's employer shifted its focus from early-stage drug research to later-stage research that was more commercially viable. Cobaugh moved on to other biotech firms — Arcturus Therapeutics, Translate Bio, Omega Therapeutics — that worked on drug discovery and mRNA technologies.

But, as Cobaugh explained, some mid- to large-size pharmaceutical firms are more interested in reducing their financial exposure than in investing in bold but risky scientific research. They can be leery of the uncertainties inherent in early-stage research: While scientists may achieve exciting results in cell samples, those results are far less likely to pan out in mice or monkeys.

"It's 50-50 every step of the way, and by the time you get to human trials, sometimes you're down to the single-digit success rates," Cobaugh said, noting that this is especially true of mRNA therapies. "The lengths of time needed for it to pay off are really long, [and] the odds of success are really low."

Last year, Cobaugh was overseeing mRNA manufacturing for Omega Therapeutics in Cambridge, Mass., when he and his family spent a month in Stowe, "just for fun." But the combination of the pandemic, Vermont's natural appeal and its entrepreneur-friendly environment convinced Cobaugh to put down roots in the ski town.

He forged a relationship with Errik Anderson, founder and CEO of Alloy Therapeutics and an experienced biotech investor from the Upper Valley. In July 2021, Vernal Biosciences announced that Alloy had become a chief investor in the company.

"He may not toot his own horn, but there are not many people around the globe who know how to set up an mRNA manufacturing line like Christian," Bradbury said. "We've been looking for a life-science company in an exciting sector for a decade now, and we finally found one with an outstanding vision [and] world-class talent."

With the success of the Moderna and Pfizer COVID-19 vaccines, Bradbury said, "the genie is out of the bottle" for mRNA technologies. He's excited for Vermont to be part of that biomedical revolution.

As Vernal Biosciences grows and attracts more talent, Cobaugh expects to hire at least one new employee every six to eight weeks through the end of the year. The company will create partnership opportunities with the University of Vermont, Middlebury College, Dartmouth College and research institutions in Montréal.

"From a company-investor perspective, mRNA is the gold rush," Bradbury said, "and these [technologies] are the picks and shovels you have to use."

Researchers and clinicians at UVM expressed similar enthusiasm about having a high-purity mRNA manufacturer in their own backyard. Infectious disease specialist Dr. Beth Kirkpatrick is chair of the Department of Microbiology and Molecular Genetics at UVM. In an email, she said it's "fantastic" to have a local mRNA manufacturer that can produce to the exacting standards the FDA requires for human drug trials and clinical therapies.

Kirkpatrick also sees opportunities in Vernal Biosciences for attracting talented researchers to Vermont and providing scientists at UVM and other local colleges and universities with potential jobs and internships. "Seems like a complete win-win!" she wrote.

Dr. Randall Holcombe, the new director of the UVM Cancer Center and chief of the Division of Hematology and Oncology in the UVM Department of Medicine, agreed. He explained that mRNA is a critical component of cutting-edge cancer research, and its role is only expected to grow.

Holcombe said mRNA technology is already used therapeutically to manufacture chimeric antigen receptor T-cells, one of the main immune cells in the human body. CAR T-cells have been approved by the FDA for treating leukemia, lymphoma and some pediatric diseases; they're also being tested for their effectiveness against blood malignancies and solid tumors.

"I think there's an opportunity to create other vaccines using this mRNA technology that could be used for cancer prevention or maybe even cancer treatment," Holcombe said. If Vernal Biosciences can bring cancer vaccines and therapies to the clinical trial stage, he added, "We'd be happy to partner with them in those sorts of endeavors."

For his part, Cobaugh hopes that his investment in Vermont will be a long-term venture.

"I think that entrepreneurially friendly mindset here has been very supportive ... I'm not sure I could have pulled this off in Boston," he said. As for the pipeline of experts in biochemistry, medicine and engineering that he needs, "We've got it all right here."

The original print version of this article was headlined "Code Makers"