Colby Dix, i am. it is. you should be. | Album Review | Seven Days | Vermont's Independent Voice 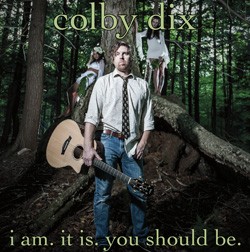 Most Vermonters likely know Colby Dix as one-fourth of the band Touchpants, a foulmouthed local supergroup of sorts that also includes Chris Friday, Aram Bedrosian and Phish’s Jon Fishman. That band is notorious for its aggressively non-politically-correct brand of humor, a base, off-color style that makes Tenacious D seem like Raffi by comparison. But as he reveals on his debut solo record, i am. it is. you should be., there is more to Colby Dix than dick jokes.

In truth, Dix has accomplished far more as a musician than simply being part of a Fishman side project. As an engineer and/or performer, the Berklee grad has worked with the likes of country superstars Brooks & Dunn, indie popsters Matt & Kim, locals the Jazz Mandolin Project and jam stalwarts the Breakfast, to name a few. That’s a diverse resume. And it’s one that informs the wide-ranging sounds found on his freshman solo outing.

Dix’s varied musical interests are unquestionably a plus, and he generally wears his coat of many colors well. “Closer Walk” is a pretty, slow-burning alt-folk cut that bears some resemblance to the work of Boston’s Joe Pernice in his Scud Mountain Boys days. “Forget This” is a scintillating number that should get the jam band set a-wiggling. Dix follows that up with an elegant acoustic gem, “I Know I Know I Know,” that tugs at the heartstrings. “Too Far” is an ambitious, atmospheric epic that hints at an affinity for Dawes. “Away” finds Dix vacillating between a clean falsetto and a strained chest voice that suggests time spent with a Justin Vernon record or three. The album closes on a trio of songs, “Try as You Might,” “WTF” and “20 June,” that further display Dix’s chameleon quality, venturing into ethereal indie folk, gritty alt-rock and a sparse, tender acoustic ballad, respectively.

Dix’s multifaceted approach is intriguing. But if his record has a flaw, it might be that he takes aim at too many styles. Individually, almost all of these songs are well crafted and compelling — though these ears could do without the adult-contemporary leanings of opener “Two.” The issue is that, taken collectively, the album struggles to settle into a cohesive groove. But that’s a minor gripe, considering the record’s many other fine qualities. And, given the cherry-picking manner in which most listeners consume music now, perhaps it’s actually beneficial. In any case, i am. it is. you should be. is a strong debut that often borders on brilliance and reveals an overlooked talent.

i am. it is. you should be. by Colby Dix is available at colbydix.com. Dix plays a release show at Nectar’s in Burlington this Saturday, December 14.