Coin Op: A quick-change artist cashes in on a virtual opportunity 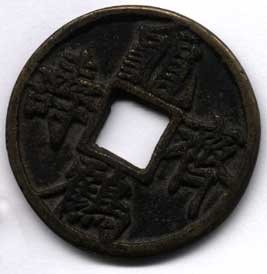 I got fired from my first job at a cash register because I apparently couldn’t make change. The math wasn’t hard, but I had no understanding of one of the basic tenets of economics: You don’t give away money. I was an exceptionally zealous cashier, and every day at the end of my shift I’d toss a handful of my own change into the till, just to make sure everything was “fine.” I wasn’t taking quarters out, so I thought my boss should have been happy. How was I to know there isn’t supposed to be “too much money” in the drawer at the end of the day? Actually, I still don’t understand what the problem was.

So my new career as an eBay coin dealer might seem ironic. Rather than giving small change away, I’ve been selling it. Foreign small change, that is. Zip-lock bags bulging with lire, lirots, centimes, zlotys and pfennigs are piled all over my office, as if I were sandbagging in anticipation of a great flood. Shelves bend under the weight of copious candareens from Imperial China, Icelandic aurers litter the floor and British new pence infest the corners like cockroaches.

However, in case creditors or thieves are reading this story, I must point out that I have only two gold ducats. I was hoping they would breed, but with all those Victorian four-pence “groats” lurking about, they must be inhibited. Anyway, I’ll have them auctioned off before this issue of Seven Days hits the stands.

My eBay handle is “vtcoin” and my mission — like that of all dealers — is simple: Buy low, sell high. I list about $10 worth of foreign coins in eBay auctions every day. I sell other things, too — yesterday, for example, I got $4.95 for my son’s Dallas Cowboys windbreaker — but I’m certain the eBay foreign coin market is my personal ticket to financial solvency, if not security. Later, when I’m truly rich, I’ll take up a hobby. Painting might be fun.

My business plan is flawless — buy foreign coins from Americans and sell them to foreigners. Americans have no idea what their bags of koula are worth, but do the people of Tonga? You bet they do. I’ve also opened an eBay store called “VTcoin’s Odd Lots.” That’s where I list the items that didn’t sell in regular auctions, in order to keep my inventory dangling before the public eye. It’s also where I’ve got listed “Nine tiny coins — maybe Roman!” and “4000 uncirculated 1968 pennies.” It only costs $10.95 a month to have your own eBay store, so if I can sell just 22 rolls of those Canadian pennies it will cover an entire month of electronic rent.

But selling is only half the process. You really make your money with smart buying. I once spotted a “chop markes dollor” listing under Chinese coins, and that looked pretty interesting. In the 1800s, Chinese merchants punched foreign silver coins with ideograms that we professional numismatists call “chop marks.” These verified that the silver being passed by Western barbarians was pure enough for Chinese use.

I carefully examined a picture of the “chop markes dollor” and noticed that it was in fact an 1877 U.S. trade dollar minted at Carson City. The dealer was a fellow in Jakarta called “Java Man,” who guaranteed authenticity. He only accepted U.S. cash, but I’ve always had a sort of minor gambling problem, so I decided to take a chance and bid 40 bucks. The coin had a book value of $245, so what the heck?

Much to my surprise, I won it, and the coin actually arrived a few weeks later. I admired it for a couple of days and then sold it to a guy in Arizona for a tidy profit. I’m not at liberty to disclose how much that profit was, but — trust me — it was definitely tidy. Buying American coins from foreigners and reselling them to Americans — that has the potential to be a nice little racket, too.

I also sell coins in bulk. In fact I just spoke with a scrap dealer in Massachusetts. He’s sending two, 12-ounce “troy” pounds of grimy Mexican 25-peso coins in a few days, and I’m already salivating at the prospect. “Fifty worldwide coins plus gorgeous 1968 Mexican 25-peso — SILVER!” will be the perfect eBay lot.

Postage, packing materials, zip-lock bags, the time spent sorting coins, my hunt for astute buying opportunities, eBay fees — all that stuff is no big deal. I’ve got a no-lose situation in this corner of cyberspace. With one sale I’m making more money than I did in two hours working at that cashier’s job. All I need is five Mexican peso deals a day and I’ll pay off the 2 troy pounds in less than a month. After that, the remaining dinero is pure profit. I think.