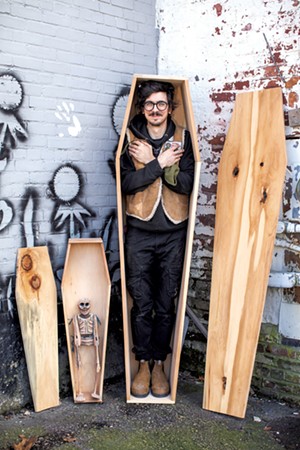 The phrase "knock on wood" has an imprecise origin, but its meaning is clear: striking knuckles on wooden objects supposedly wards off bad luck. Burlington woodworker Noah Burton says the idiom was just one inspiration for his company's name, Knock Knock Natural Coffins & Custom Woodworking.

"It's death — death coming a-knocking," he said with a wry smile over a cup of coffee in Burlington's South End.

Thus far, coffins are only a sideline at Burton's one-man enterprise on Pine Street. He's built two and sold just one — for a pet. But he hopes to find a market for his affordable, green alternative to high-end caskets.

The slim 32-year-old's coffins are distinctive in several ways. With their elongated hexagonal shape and unvarnished surfaces, the pine boxes seem straight off the set of an old Western. Even more notably, Knock Knock coffins are completely biodegradable. The locally sourced wood and raw iron nails he uses will fully break down in soil over time, Burton said. The wood in conventional caskets will eventually decompose, too, but metal and other components won't.

A casket that completely biodegrades is a must for anyone wanting what's known as a "green" burial, one that's as environmentally friendly as possible. In a green burial, bodies aren't embalmed, and they go into the ground in a simple shroud, a biodegradable container or nothing at all.

Burton began crafting coffins as a way to grapple with his own mortality.

"I tried to push it away at times," he said of his thoughts about death. "And then I realized, maybe one of the ways to get a better understanding of it is to actually do some act that directly relates to it." 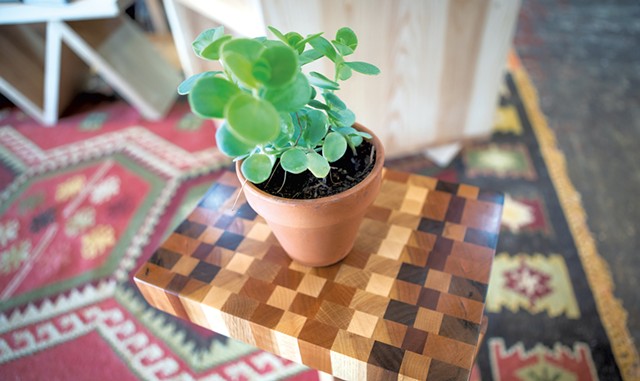 Burton has degrees in poetry and analytic philosophy. His 2020 book of poems, Clothesline Saga, is full of disorienting passages and darkly tinged non sequiturs.

"I guess I've always had this thing with, like, really deep, heavy subjects," he said, so his work as a coffin maker and poet "kind of relate in a certain way."

Burton became a woodworker in the winter of 2017 and now works out of a space at Sterling Hardwoods, where a prototype of his pine coffin leans against a wall. That one actually will be his coffin, when the time comes, he said. Its presence is unsettling to say the least, as its grim purpose is emphasized by the grinning faux skeleton that rests on top.

"I wanted to make a business that I didn't see around town, [one] that actually used to be a part of every single town," Burton said. "There used to always be a coffin builder, and [their wares] didn't cost someone thousands of dollars."

Demand for Burton's coffins is unclear. He says he's cultivating potential buyers through other work he does and items he sells.

Though they may receive a lot of attention in the media, green funerals still aren't very popular. And the jury is out on what even constitutes a green burial, according to Joshua Slocum, executive director of Vermont's Funeral Consumers Alliance. Governments don't collect data on how many funerals are considered green, Slocum said, so it's impossible to know how many happen yearly.

"From practical experience talking to the public, there certainly is more interest in simple, natural burial than there used to be," Slocum said by phone, adding that cremation is by far the dominant choice in Vermont.

Burton got started in woodworking with New Hampshire woodworker Gabriele Tise, whose company, Tise Woodwork and Design, is known for high-end custom work. Burton was a complete novice when Tise hired him to help on a project, she said.

"He had never read a tape measure before," she recalled by phone. "He's the first kind of green woodworker that I've taken [on.]"

He caught on quickly, though, and left her employ with good skills, she said. Shortly after landing in Burlington in 2019, Burton fell in with the folks at Sterling, including Sterling Furniture Works owner Marc Leone. The woodshop is adjacent to Speeder & Earl's Coffee, where Burton had briefly worked. Leone said he likes having an old-fashioned coffin maker among his colleagues.

"We like a lot of those sort of no-nonsense elements that society used to have," he said. 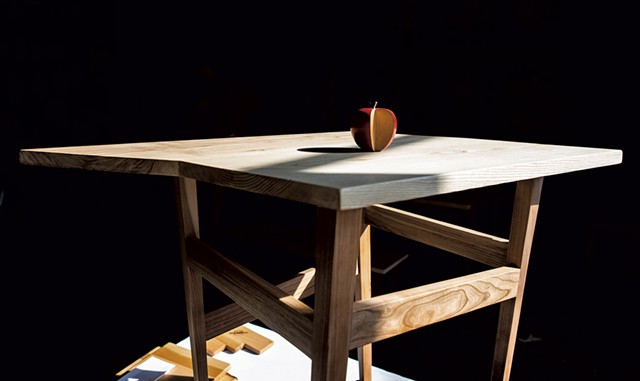 While he seeks a market for his coffins, Burton also makes tables and other, smaller items. His work has a playful, dreamlike quality. One table in his shop looks like something from Alice in Wonderland, its legs tapering in opposite directions, its surface plane devoid of right-angled corners.

He recently built a coffee table from a cross section of a buckeye burl, a tumor-like abnormality that can grow on trees. He used epoxy and aluminum coloring to fill in naturally occurring pockets. Combined with the burl's natural spalting, the color abnormalities caused by fungi, the piece has a psychedelic aesthetic. Unlike Burton's economically priced coffins, the buckeye burl table has a price tag similar to a conventional casket.

In addition to human caskets, Burton is ready to make pet-size ones. His first, still on display even though it's been sold, is earmarked for Rosa, a 15-year-old beagle mutt. Her owner is local maker Kathleen McVeigh, known for her quilted jackets, dresses, and other apparel and accessories. She says she saw Burton's coffins and immediately felt inclined to add a quilted lining, which led her to ask him to build a casket for her aging pooch.

"[Burton] came into my studio one day when she was there and we measured her," she said during a phone call.

McVeigh plans to line the coffin with some special material printed with Rosa's likeness. Partnering with Burton is a perfect fit, she said: "I use all-natural materials [like] cotton and linen, so the whole thing will degrade."

Before Burton built his first coffin, he'd made a wooden box to store a friend's ashes, a painful process that nevertheless inspired his current interest in the craft.

"Going through the grieving process while doing that, as hard as it was — it was actually extremely healing," he says. "I made this thing out of something really difficult."