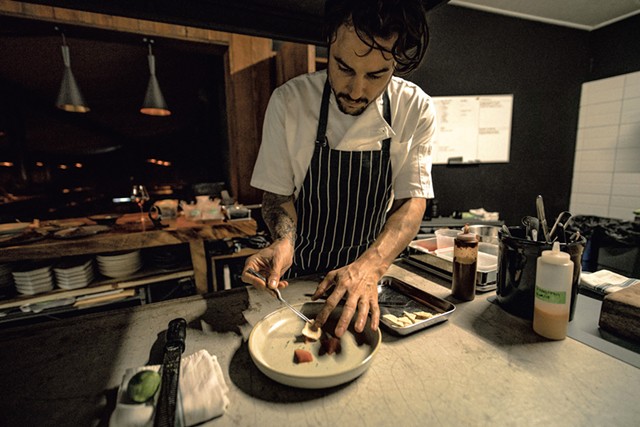 Travis Limoge will offer his second series of seven-course, prix fixe tasting menu events from September 22 to 24 in the rooftop space at Karma Bird House at 47 Maple Street in Burlington. Reservations for the Pirata events must be booked in advance through exploretock.com/pirata. Each "dinner experience," as Limoge described them, has only eight spots, priced at $130 inclusive of tax, tip and five paired beverages.

Limoge, 37, held his first trio of dinners in late August and expects to host them monthly for the foreseeable future. Pirata was the name of a restaurant he founded in Puerto Escondido, Oaxaca, Mexico. Before landing there, he cooked in restaurants ranging from high-volume steak and seafood venues in the mountains around Denver to fine-dining establishments in Los Angeles.

"I can do a lot of cool shit with plants," Limoge said. By way of example, he described a dish from the August menu: an orange tomato that he segmented, buried for several hours in dill, then cold-smoked and dusted with dehydrated, powdered tomato.

"It was like a tomato bomb," Limoge said, "the best way you can possibly express tomato without changing what tomato is."

Under his umbrella business, Cocina Pirata, Limoge is working on a line of fermented products called Vianda, which will be available through subscription only.

Limoge grew up in Essex Junction and left Vermont at 18 after starting his career at local restaurants, including Leunig's Bistro & Café. "I always knew I wanted to cook," he said, "and I wanted to see the world."

After settling in Oaxaca, he lived there for five years, until March 2022, when he and his family moved back to Vermont. Upon his return, Limoge worked for about three months with the team at Kraemer & Kin to help launch the food program at its new location at the Alburg Golf Links.

Limoge said he is fiercely committed to local, seasonal menus and looks forward to crafting them during a Vermont winter. He prefers not to be called a chef: "My goal is to be the best cook I can be."