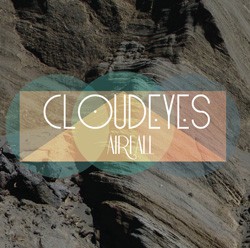 In a recent email to Seven Days introducing his band’s sophomore EP, Airfall, Cloudeyes guitarist James Christenson wrote that despite recent lineup changes, “one thing we still seem to do decently is write thunderous riffs.” Christenson was referring to the differences between the new recording and Cloudeyes’ debut, Centibear, which was closer to the math-rock end of the ambient postrock spectrum than is their latest, more ethereal release. But he’s selling his band short. Cloudeyes, which includes drummer Jay Steinmaus and bassist/microKORG player/ “pocket” pianist and engineer Justin Gonyea, do indeed write thunderous riffs. But thunder is always presaged by lightning. And those fleeting, savage strikes, coupled with lingering sulfuric clouds of emotion, make Airfall a dark, brooding and cathartic work.

Though divided into four movements, Airfall essentially works as one larger suite. In the span of 12 seamlessly flowing minutes, Cloudeyes alternately attack and relent; the resulting sounds are harrowing and contemplative in equal measures.

The piece opens on “Canary Anomaly.” Dark, distorted guitar gathers on the horizon, a quiet rumble made ominous by dangerous flashes of percussion that strike from a distance, igniting the gathering cloud wall. It’s a swiftly moving storm that unleashes in a squall of grimy, crunching noise. But as quickly as it hits, the maelstrom ebbs, leaving only glistening droplets of cymbals and guitar, and muddied bass, gently transitioning into “Death Rides a Horse.”

From here, it seems as though the storm has passed and we’re watching it from behind as Christenson’s spires of high-toned guitar menace some distant plain. But any grade schooler knows that lighting can strike from miles away. And it does here, as another torrent of roiling distortion explodes, then fades in a dissipating mesh of delicate guitar work that teases the next movement, “Doldrums.”

Christenson notes that Airfall is thematically based on the emotional trauma of a breakup and the subsequent resolution that “we live for ourselves.” On “Doldrums,” it seems he’s moved past the anger and uncertainty of the immediate post-breakup aftermath and is looking inward. The math-rock inclinations of the band’s debut resurface and mingle with Cloudeyes’ newfound atmospherics, ultimately surrendering on the gently comforting and well-named closing segment, “It Is Her Serenity Which Galled Him the Most.”

Cloudeyes play the Higher Ground Showcase Lounge in South Burlington with the Octopus Project this Friday, August 16. Airfall is available at cloudeyes.bandcamp.com.